May 2014 was the month that we published many articles in regards to the development of horticulture in Asia. But May was also the month a respected Dutch greenhouse constructor went bankrupt and the month of the angry Italian eggplant growers. Here's our overview of May 2014:

1 May 2014: Due to the geopolitical tension, Azerbaijani horticulture thrives, with special thanks to Russian consumers and French technology. Oil and gas-rich Azerbaijan is emerging as a horticultural force to be reckoned with thanks to good investment opportunities for greenhouse growers, such as mild temperature in winters, high sun radiations, good export conditions to Russia and of course low energy costs. Rufat mammadov of Baku-based Grow Group Azerbaijan told us all about it.

6 May 2014: In China, there are many greenhouses, but good growers are hard to find. At the 16th Hortiflorexpo IPM in Beijing we had the chance to speak with Jos Houwen, a horticultural specialist who works as a grower trainer for the GreenQ Horticultural Expertise Group. GreenQ trains Chinese growers at several locations in the country, because knowhow and expertise in cultivation skills for modern greenhouses is hard to find, or rather; not available yet. As the Chinese horticulture market is developing rapidly, the industry is demanding qualified people. Houwen: "Many Chinese groups and entrepreneurs are investing in greenhouses over de last years. They realize that there is a good market for sustainable and safe food production, while greenhouses give a good ROI, especially on longer terms. They only need some people who know how to use them." 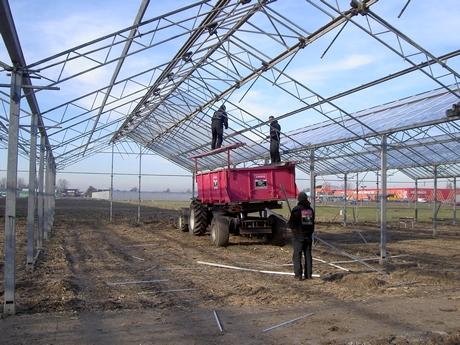 15 May 2014: In May 2014, Dutch greenhouse constructor Zwirs-Knijnenburg filed for bankruptcy. Zwirs - Knijnenburg was a family company that entered the industry in 1968. The company is specialized in the building and maintenance of greenhouses in national and international projects, with a focus on Venlo and wide span greenhouses. Next to this, the company is also known as a greenhouse demolition company with many expertise.

16 May 2014: May was also the month of the premier show for horticulture in Southeast Asia. Please take a look at the report we made there: Photo Report : Horti Asia 2014

the greenhouse vegetable sector. Not just in the Netherlands, but also in other places in Europe. This was said by Cor Hendriks, sector manager of horticulture at the Rabobank. Companies are stopping and going into administration. If the prices don't improve, more companies will soon falter. So why is the bank facilitating companies with extension plans?

29 May 2014: A group of angry Italian eggplant growers were very angry at large traders in May 2014. "They are taking away our dignity". Mario Incardona, administrator for Gold Green, posted some pictures and made an appeal on his Facebook page. Eggplants are in fact quoted at €0.20/kg at Vittoria's market but are then sold at €2.20/kg in supermarkets."This is a year of hard work and sacrifices down the drain. I'd prefer to get my product back"