Honeybees pollinate crops from blueberries in Maine to almonds in California and are one of the most important pollinators in North Carolina.

As a result, a global decline in honeybee populations during the past few decades has become a serious environmental concern.

Now, researchers at the University of North Carolina Greensboro are working on a new tool to combat one of the major causes of honeybee declines: the parasitic mite Varroa destructor and the numerous harmful pathogens it vectors.

Olav Rueppell, Ph.D., associate professor of biology, and his principal collaborator, Kaira Wagoner, Ph.D., a postdoctoral fellow in environmental health science, have worked on the problem at UNCG for over a decade, supported by grants from the North Carolina Biotechnology Center and the U.S. Department of Agriculture. 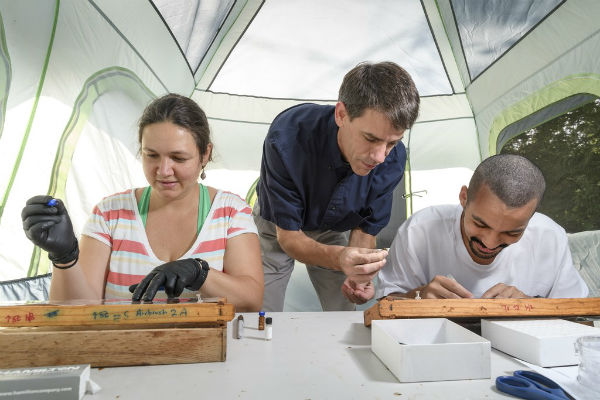 The Varroa mite is to the Western honeybee (Apis mellifera) what the mosquito is to humans: devoid of value and potentially deadly.

“In addition to being a parasite itself, It spreads several harmful viruses,” Wagoner explained in an interview with the Biotech Center. 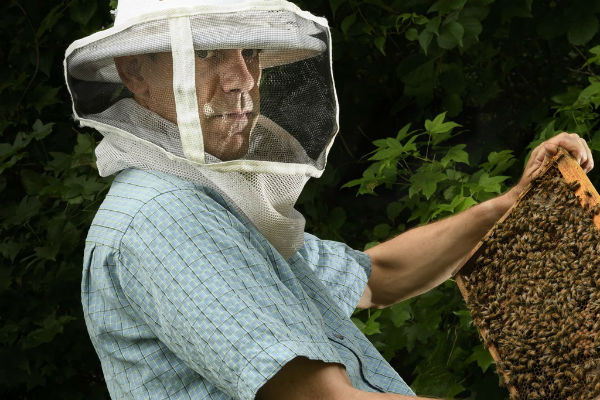 Each year between 2012 and 2016, the average total annual colony losses in the United States exceeded 34%.

Varroa mites are considered the most severe threat to modern apiculture because their recent and rapid global expansion has resulted in increased beekeeping costs and decreased honeybee health.

Selective breeding of bees for a naturally occurring social immune trait called “hygienic behavior” has emerged as one sustainable approach to reducing the mites’ impact on honeybees. Hygienic behavior is the detection, uncapping, and removal of diseased or parasite-infested brood from the colony. 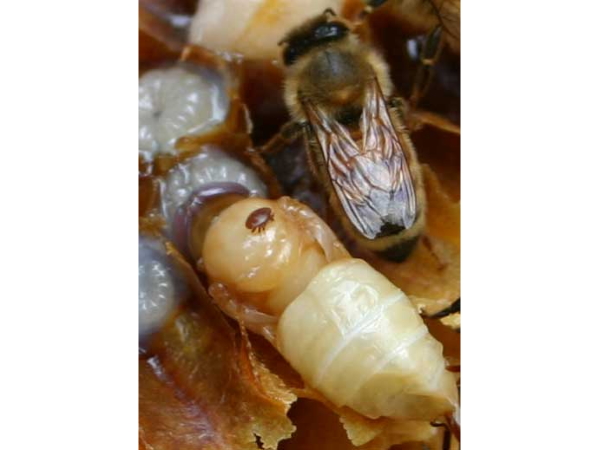 By spraying hives with a mixture of hydrocarbon bee pheromones, the researchers found they can increase the hygienic behavior of the bees, helping them find and remove sick bees from their hives. Bees in the treated hives zero in on sensory signals that tell them which caps in the hive contain sick bees. ”The spray helps breed bees particularly good at picking up these chemical signals,” Reuppell told the Biotech Center.

The researchers hope to develop a reasonably priced spray-on product that beekeepers can use to reduce hive losses.

Helping the bees help themselves
“It’s a way to help the bees help themselves,” Wagoner said. She noted that the Biotech Center grant was “critical” to support her work in the gap between earning her Ph.D., which focused on the bee research, to a nearly million-dollar grant from the USDA. Wagoner, who earned a master’s degree studying mosquitos, said she switched to the bee research “So I could work with a beneficial insect rather than one I’m trying to kill.”

Unfortunately, using pesticides, still a major approach to controlling the mite infestations, is problematic. “It’s hard to kill a bug on a bug,” explains Wagoner. Anything that kills the mites is usually not good for the bees, either.

The miticides used to reduce Varroa populations are not only harmful to bees, but they are also only temporarily effective due to mites’ rapid evolution of resistance. Thus, the researchers say, one of the most promising strategies to combat Varroa is the selective breeding of disease-resistant honeybees. “In the same way we breed a hound dog for smelling, we can breed bees better at sniffing out the mites and removing them from the hive,” Wagoner said.

Rueppell said that by tapping into a different pathway than pesticides, mites will have a tougher time developing resistance. “It’s not a silver bullet, but it’s another tool in our arsenal. At the moment, these hygienic bees are surviving better than non-hygienic bees. We rely too often on interventions that are not sustainable.”

Both Rueppell and Wagoner pointed out that the research is more complex than they first anticipated. Rather than a single chemical, they discovered a mixture works best and they continue refining the approach. Currently, the synthetic compounds they use are produced by the University of California at Riverside and are not generally available.

Wagoner encourages people to promote honeybee health by avoiding pesticides on their lawns, letting the clover grow, and planting bee-friendly flowers. Flowers that bloom late in the summer are particularly important to help the bees gather nectar needed for honey prior to overwintering when major hive losses occur. They keep the hive temperature above 90 degrees in winter, Wagoner explained, and need the energy to produce the shivering-like movement that produces the heat.

Ramping up to produce the spray in commercial quantity will eventually require a manufacturing partner and remains several years away. Rueppell said the project may require additional funding to complete the research.