Protection against root disease starts at the beginning of the growth cycle. The crop rotation is starting up again, and at some farms, the first plants have already been culled. Starting cultivation cleanly is, of course, extremely important. However, it is also time to think a step further, says Biobest.

According to the crop protection supplier, starting clean is not the only way to prevent later problems. For example, Biobest specialists say it is "extremely important to take the first steps in biological crop protection now. They recommend the early application of Asperello T34 Biocontrol. This gives growers "maximum biological protection against root diseases such as Fusarium and Pythium. 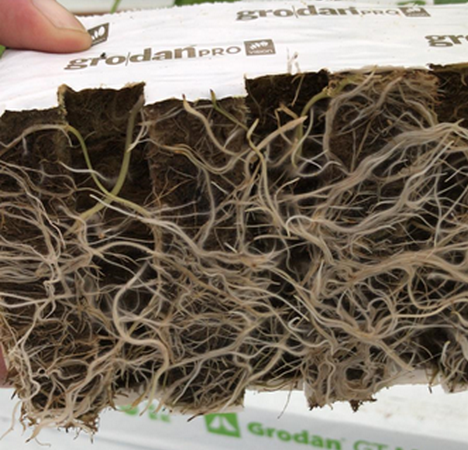 More extreme growing conditions
Due to more extreme growing conditions, root problems, such as Pythium and Fusarium, are a growing problem. Several growers are experiencing problems with these diseases. It is important to protect the crop against these fungi in time, and it is important to do so as soon as possible. Asperello T34 biocontrol provides biological protection against these diseases.

In the best-case scenario, the first application of Asperello is already done at the plant grower. The natural Trichoderma fungus contained in Asperello grows along with the roots, leaving no room for other fungi. After the Trichoderma forms around the roots, it enters into symbiosis with the roots of the crop. They live in harmony, optimizing nutrient uptake and protecting against other bad fungi, including Pythium and Fusarium.

The Trichoderma strain T34 asperellum is a beneficial fungus that originated in nature. As a result, this strain retains the strength it developed in nature. This makes Asperello a very robust product. Once colonized on the root, the product persists well even after treatments with various plant protection products. A compatibility list can be found on Biobest's website.

Applications and dosages may vary by crop, always consult the label or contact a Biobest advisor. In general, the following advice is leading:

Treat the crop with Asperello as early as possible after root formation. Ensure that crops are treated with 0.5 grams per square meter at the plant nursery. The second treatment is best carried out when placing the crop on the mats or when repotting. For this, Biobest recommends 1 kg per ha. About four weeks after this treatment, they recommend having a substrate and root sample analyzed to determine the colonization rate of the Trichoderma.

Apply the pesticide after the filters and preferably turn off the water disinfection 24 hours before and 24 hours after application so that the fungus reaches the root. After the fungus is established in the root, agents for the purpose of water treatment are not a problem.

With the elimination of chemicals against Pythium and Fusarium, Biobest sees treatment with Asperello as "a very good alternative in a broad spectrum of crops, such as greenhouse vegetables, potted plants, and cut flowers.