Condensation on the greenhouse cover can significantly reduce light incidence. The hydrophilic properties of AntiCondens ensure that more light enters the greenhouse.

Condensation on the inside of the greenhouse cover generally occurs at a low outside temperature and a high relative humidity inside the greenhouse. Under these conditions, the moisture in the air condenses on the (colder) greenhouse cover. If the condensation forms droplets on the glass or the plastic film it significantly impedes light incidence.

Researchers at Wageningen University & Research observed that the light loss can be as high as 9%.

The reduced light comes at the expense of production. After all, the following rule of thumb applies: 1% more light yields 1% higher production. In low-light months this rule applies without exception, and every ray of sun is more than welcome. 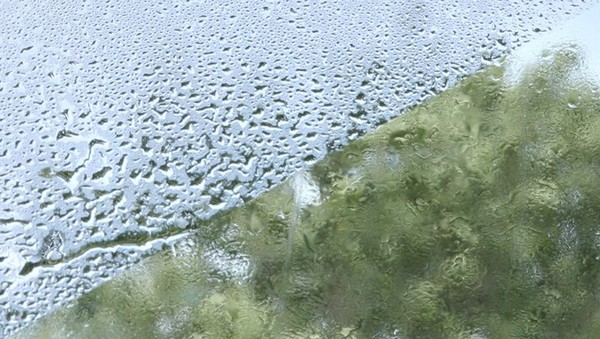 Water film is better
The way the condensation appears on the greenhouse cover makes all the difference. Depending on the type of glass or plastic, and the contamination, the water droplets can be larger or smaller. Sometimes there are no droplets to be seen at all, because the water that is present on the greenhouse cover appears as a fine film. The latter is best, since in that case there is virtually no light loss.

AntiCondens ensures that a fine film of water lines the greenhouse cover instead of a pattern of water droplets. This is because the coating changes the surface energy of the greenhouse cover. The terms hydrophobic and hydrophilic are important in understanding this dynamic.

Hydrophobic means water-repellent. After having your car cleaned in a carwash, you can have a layer of wax sprayed on your car. You will then see water remaining on the car in the form of large spherical droplets. This typifies the water-repellent effect. 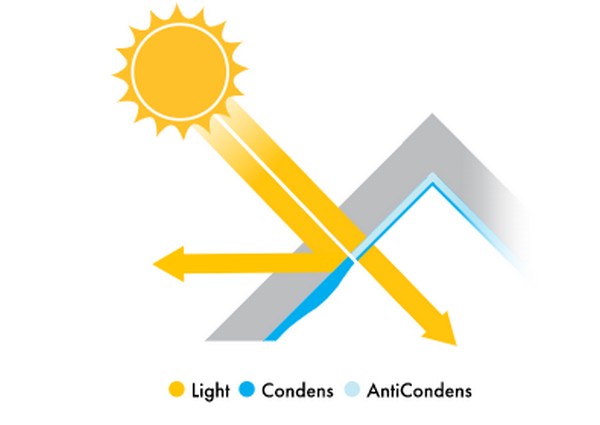 Unimpeded light incidence
AntiCondens does exactly the opposite. This hydrophilic coating ensures that the water spreads out: rather than spherical droplets, the greenhouse cover is covered with a fine water layer. AntiCondens increases the surface energy of the greenhouse cover as a result of which the water spreads out instead of forming water droplets.

This is the desired situation. This allows the light to enter the greenhouse to a higher degree, where it can benefit the crop. Measurements taken in actual practice at greenhouse operations show an increased light incidence of 5-7%. All of this light can be converted into production.

Reduced chance of mould development
There is yet one other major benefit. The formation of droplets on the greenhouse cover increases the chances of disease. The droplets can fall on the crop where they form a germination site for spores and moulds. This is a major problem in plastic greenhouses in particular.

The water layer created through the application of AntiCondens does not cause any droplets to fall down. The water only flows in the direction of the gutter, where it cannot do any harm. The hydrophilic character of AntiCondens therefore has a twofold benefit: more light and fewer disease-related problems.