A grower can only really judge a variety very well at the end of the season. For Peter Aarts, owner and cultivation manager of Groentekwekerij 't Bleekerven, that end is mid-September for the cucumber cultivation. After that the autumn tomatoes are going into the greenhouse in Heusden in North Brabant, the Netherlands. In the conclusion of a three-part series about cucumber variety Gotja, the conclusion is: "If Gotja remains admitted to the Belgian auction, I will certainly grow this variety again next year."

Peter: "When I look back, I can conclude that Gotja is a non-selective variety that keeps a lot of cucumbers on it. Of course, Gotja also suffered from the extreme weather conditions this summer. Like other varieties, in that heat Gotja gave some more Class II cucumbers. But this variety remains productive." 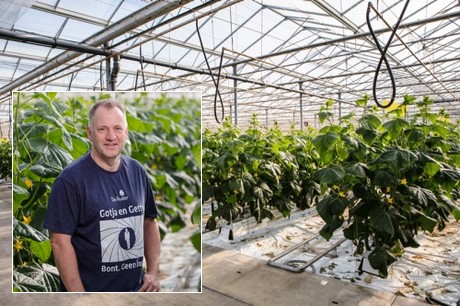 Control by color
Peter continues: "The lesson we learned is that at the end of the cultivation - when the crop gets tired - we have to control well by color. The EC must remain sufficiently high for a good color.

Because Gotja is not selective, there are 10 cucumbers hanging on the plant at the end of the cultivation, all of which are thickening simultaneously. If you do not pay attention, that will be at the expense of the color. But that applies to every cucumber variety; that is mainly related to the cultivation time."

Lots of cucumbers
"Everywhere Gotja is super productive. We get an average of 75 to 80 cucumbers per square meter and in some departments even higher than that. In addition, the quality was excellent up to the last 3 weeks. Moreover, Gotja is very strong against Mycos: I have not seen that anywhere."

In terms of cultivation strategy, Peter is very satisfied: "I don't think I will grow Gotja differently next year. The outdoor conditions will be different and I will control according to that. But I do think that we will harvest selectively on quality next year. The most experienced people are then harvesting the cucumbers of slightly lesser quality, so that the rest of the team can harvest faster in terms of length and shape. "

Uniform for sorting
Gotja is very uniform in length and that is a big advantage for automatic packaging. "That is also because the variety is not selective. The cucumbers are so uniform that our sorting machine did not stop once."

Peter concludes: "If Gotja remains admitted to the Belgian auction, I will certainly grow this variety again next year."