They've been working on putting it on the market for about 2 years now, and after their demonstrations at the IPM Essen last January, the interest in their varieties increased sharply. The products in question are the ‘really edible’ rose from rose breeder Pheno Geno, a Serbian-Dutch company. Their edible rose collection is named 'Taste of Love' and is currently their most important product group, followed by their pollination collection and winter-hardy varieties. And the following large projects are in the pipeline, like creating rose oil. 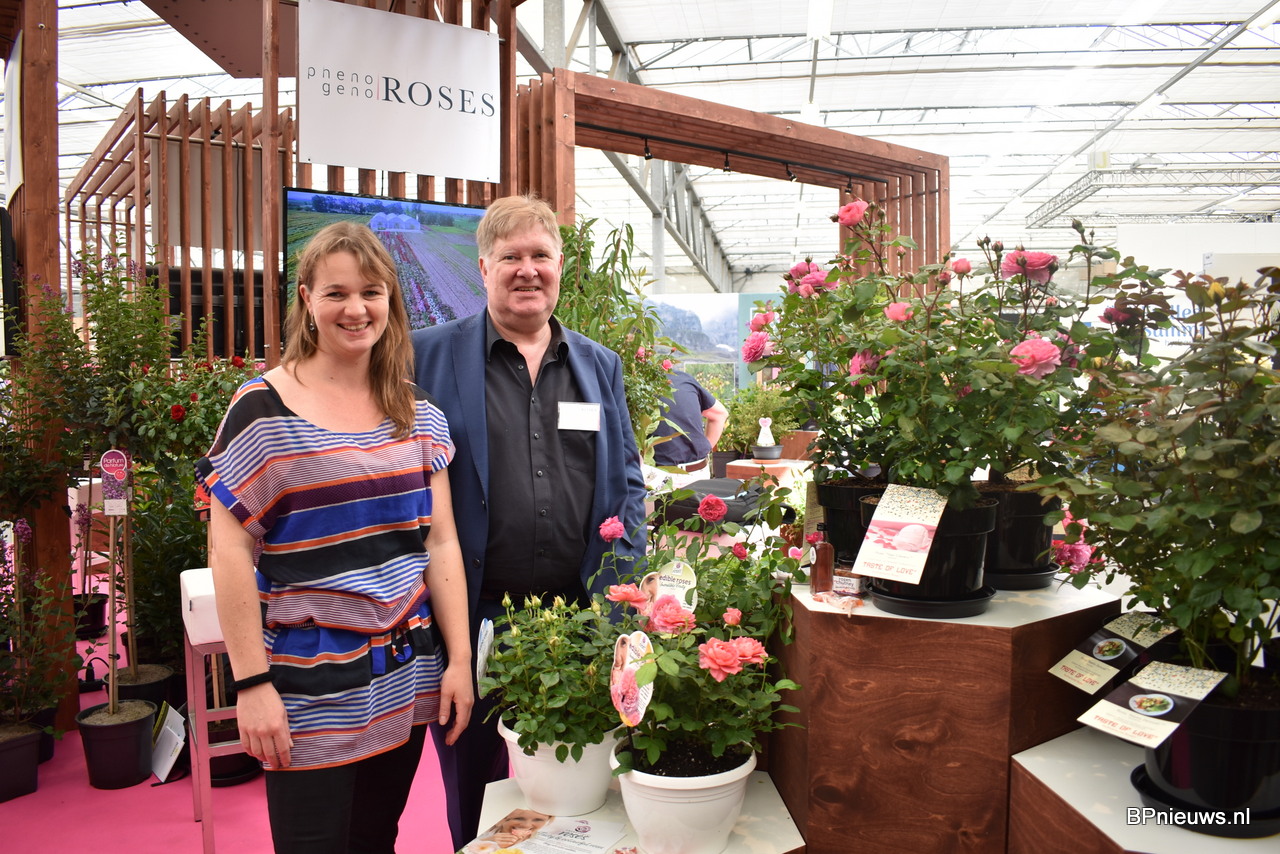 Willianne Sluiter of Incredible roses and Peter Cox of Pheno Geno Roses at Plantarium 2019 in Boskoop, the Netherlands. Sluiter not only produces the edible roses of Pheno Geno, but she also supplies the starting material.

Edible roses - how it started
After many years of testing, Pheno Geno Roses put their first roses on the market in 2017. "We tested for nutrition and conducted taste panels. The next step was to change the perception of edible roses as most people aren't familiar with eating rose petals. So, we had to change the mindset of the consumer, a task in which we were assisted by professional chefs from middle and top segment restaurants. By linking a famous chef to an edible rose, eating rose petals becomes trendy", explains rose breeder Peter Cox of Pheno Geno Roses. From the 100 selected rose varieties, they narrowed it down to less than a dozen.

Named after chefs
All varieties are gathered in the 'Taste of Love' collection in which all varieties are named after famous chefs. At the IPM Essen 2019, for example, two new varieties were baptized by famous chef Eveline Wild (Austrian Television cook) - who prepared her own-made chocolate delights with rose petals for the visitors and demonstrated how to use edible rose petals in everyday cuisine, and by Theo Clevers (Dutch ice cream Champion) - who made and let visitors try his self-made rose ice cream.

Increasing demand
Since the IPM, Cox has seen the demand for the edible roses increase sharply. Since the show, they now have 100 rose growers who are testing their starting material in large numbers. "The grafting season is now over and we have sent almost 300,000 budding eyes to growers all over Europe, and even abroad, to Ukraine, Russia, Japan, United States, Korea and Trinidad."

Cox sees the highest growth in the southern part of Europe. "The climate is more similar to that of Serbia, where varieties are being crossed and trialed. "Therefore, the roses behave more or less similar to our trials."

More than edible roses
After edible roses, which is their most important group at the moment, Pheno Geno also breeds roses that attract pollinators and winter-hardy varieties. "Roses that attract birds, butterflies and bees are quite trendy. And in countries like Russia and Ukraine, our winter hardy roses are gaining more and more foothold in the market."

Large project in the pipeline - rose oil
The next large project is in the pipeline, which is creating rose oil for use in aroma therapy or in an actual perfume. "The largest market for rose oil is laundry detergent. However, just 1 percent of the perfume in this product comes from rose oil and 99 percent is synthetic. And as there is a trend towards more natural solutions, we strive to increase this percentage to 3%. This will mean that the acreage will triple as well, from 20,000 to 60,000 ha in Bulgaria for example."

Also in Turkey, Morocco, China and Iran, roses for rose oil are being produced, but in all these countries, there is just one type of oil; phenyl ethanol from Rosa damascena, stresses Cox. And this is where the new rose varieties of Pheno Geno come in. "At Brightlabs in Villa Flora we tested, with the help of LIOF investment fund, 200 of our roses and found over 300 different etheric oils. Two types, namely Geraniol - a flowery and fruity scent, and Nerol - a lime and green scent are also available in large amounts and can bring new tastes of natural fragrance."

Apart from the fact that their flowers can offer two different scents, the flowers also seem to have more and sturdier flower petals. "More flower petals means more oil and sturdier heads opens doors to automate the harvesting process."

In their genomic research, they have found the genetic basis for these 2 special oils and in combination with a gene for more flower petals, Cox expects that in coming years they will be able to get large amounts of different etheric oils for all kind of new usages.

So, what's next? "We now know which roses are suitable for the rose oil production, however, we first need to enthuse the industrial suppliers, not only the large laundry detergent manufacturers and suppliers, but also the exclusive perfume stores."

They've looked at the whole chain, from breeder to grower till end consumer, and they will contact every link in this chain to learn about their desires and how they can involve them in trials. But how to convince them? "We will show them our lab results and the results of the scent classifications. On top of that, we also want to actually produce one or more of the new etheric oils in small amounts to enable them to try out and share their ideas.

Relatively new to the rose breeding industry
Pheno Geno Roses is a Serbian-Dutch company and is not only a new player in the garden rose breeding. In October 2015, Pheno Geno Roses put their first own bred garden roses, grown at their nursery in Serbia, on the market in France. Currently, Pheno Geno has an office in the Netherlands where they do research, and cross varieties, and an office in Serbia that crosses and tests the varieties in open field.