A major Swiss domestic supplier, fenaco Landesprodukte, is working on a pilot facility for vertical farming. They're investing in YASAI, a spin-off of public university ETH Zurich. With an investment of CHF 500,000 in YASAI AG, the fenaco cooperative is participating in the construction of the pilot facility in Zurich.

"Consumer demands for healthy, safe and sustainably produced food require innovative solutions from the agricultural and food industry. By participating in a pilot facility for the novel Vertical Farming production method, fenaco Landesprodukte wants to verify the advantages of this cultivation method", the company explains. "Thanks to its stacked installation, it increases productivity by a factor of 10 to 15 per square meter. Water consumption can be reduced by 90%."

"In the future, we do not want to produce ourselves, but rather use our experience in the field of vertical farming to open up a new, profitable business segment for growers," says Daniel Schwab, Head of the Vegetable Category at fenaco Landesprodukte. To this end, a sounding board was set up with vegetable producers from the Seeland region. 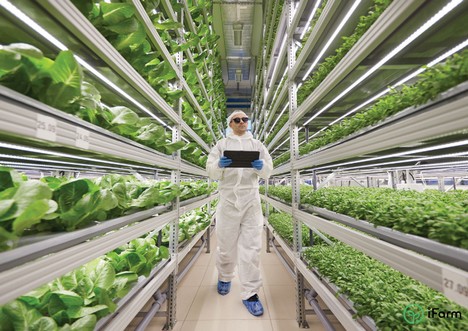 No chemical crop protection is used, or very small amounts only. In addition, year-round indoor production allows growth 24 hours a day, 365 days a year and it is possible to increase the proportion of Swiss vegetables and herbs. "The aim is also to demonstrate the economic efficiency for various product categories and to reduce energy consumption by exploiting synergies", they explain.

A strong signal for innovation in the agricultural and food industry
fenaco entering the field of vertical farming is a strong signal for innovation in the Swiss agricultural and food industry. The partnership with the ETH spin-off enables fenaco to better understand the potential for vertical farming and, if positive, to exploit economies of scale with larger plants. On the one hand, the product portfolio will be tested in cultivation and marketing and on the other hand, central agronomic questions will be addressed in a research project in cooperation with Agroscope.

"We are working on the farm of the future and regard this investment as a preliminary work and a basis for decision-making for future investments of our producers", says Markus Hämmerli, Head of fenaco products and research cooperations. This means the commitment is based on the goals of the fenaco cooperative: to support Swiss growers in the economic development of their companies.

Industry and technology know-how go hand in hand
The ETH spin-off YASAI under the leadership of CEO Mark Essam Zahran is the ideal partner for fenaco. The four founders and majority shareholders have excellent know-how in the field of software and hardware as well as a large international network. After several successful financing rounds, fenaco's financial commitment and the associated construction of the first pilot plant in Switzerland is an important milestone for the still young company.

"Thanks to the cooperation with fenaco, we now have a strong industrial partner with a lot of market and customer knowledge from the agricultural sector on our side. This is extremely valuable when scaling up the technology and entering the Swiss market," says Mark Zahran of YASAI. The partnership with fenaco also enables YASAI to distribute the vegetables and herbs it produces nationally in the retail trade and in the catering trade.