"Vertical farming is not the answer for all of humanity's woes"

On the second day of the Vertical Farming World Congress, the speakers really got to the meat of the matter (or should that be to the leafy greens of the matter?). The day was opened with three presentations on market opportunities in the industry, given by Ian Cox of Innovate UK, Christine Zimmermann-Loessl, Chairwoman of the Association for Vertical Farming, and Henry Gordon-Smith, Founder and CEO of Agritecture.

Challenges and opportunities
When people talk about vertical farming, they often focus on what it gets right: saving water compared to traditional agriculture, providing communities with safe, fresh, healthy and locally-grown food, etc. In order to get the complete picture, however, it's also important to look at potential downsides. Ian, in his presentation, didn't shy away from discussing those.

He mentioned the high price of real estate in urban location as one of the potential obstacles to vertical farming. Critics also often argue that vertical farms are energy-intensive; however, Ian notes, there are many different models in vertical farming, and not all of them use lighting. Still, energy is important to the success of a vertical farm, and it is crucial that continuity of power is guaranteed. Finally, not all crops can be grown in vertical farms - the majority is herbs and leafy greens, which grow fast, command a price premium and do not need much light. According to Ian, "more fruits, vegetables, pulses and ground fruits need to be produced in vertical farms."

There are, fortunately, also lots of opportunities in vertical farming - Ian points to innovations in sensors, automation, and new crops being developed as some examples. One of these success stories backed by InnovateUK through CHAP, is GelPonics. 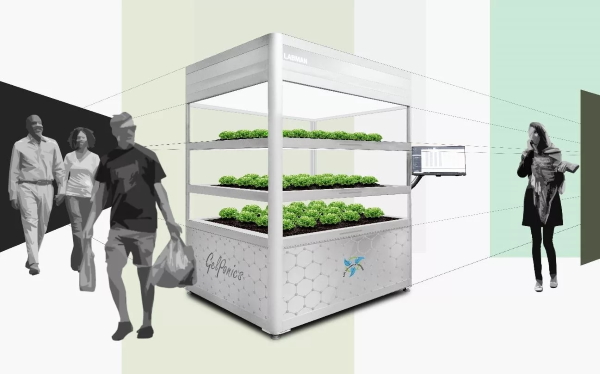 Vertical farming: part of the solution
Christine Zimmermann-Loessl provided an overview of the work of the Association for Vertical Farming. In her presentation, she highlighted the need for agriculture to be more environmentally friendly. In order to achieve this next level, "cooperation of science and industry is important", she said.

With humankind reaching the planetary boundaries, Christine argues, this is particularly important. And while land is scarce, vertical farming alone won't solve this problem. "It will be a part of the solution", she said. For more on Christine's views on vertical farming, check out this HortiDaily interview.

Resilient cities
The last speaker in the day's morning session, Henry Gordon-Smith, spoke about the city of the future, which according to him should be shaped by data-driven scenario planning. He showed how in the past, even a dense urban area like Manhattan had local agriculture. Throughout history, cities always needed to have the resources to make them thrive.

At some point in recent history, that changed, with the focus shifting to heavy urbanization. "One of the cons now is that cities are less resilient". Henry takes Ontario as an example - it used to be an exporter of food, but with unchecked urban development in Toronto, the area actually turned into a net importer of food, making it less resilient. He then went on to highlight some of the solutions Agritecture can offer for these issues. 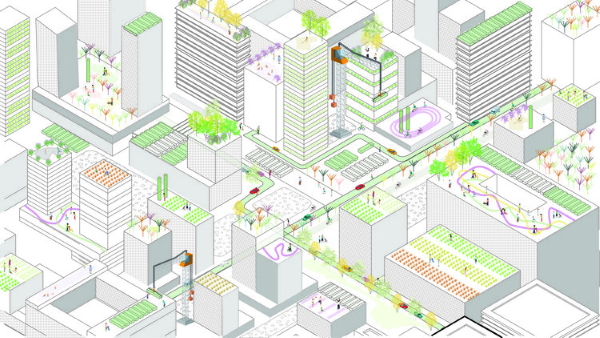 James has a background in property and renewable energy - two fields that are related to the vertical farming sector, but not to agriculture as such. Still, James heads one of the largest vertical farms in the world - this fits into a trend that Henry Gordon-Smith also highlighted, where people get into the industry without necessarily having a background in agriculture.

For James, that meant that he had to look for talent to join the team, and he mainly used local, British talent for that. "It's important to build a strong brand to attract strong talent with the right attitude", he emphasized. 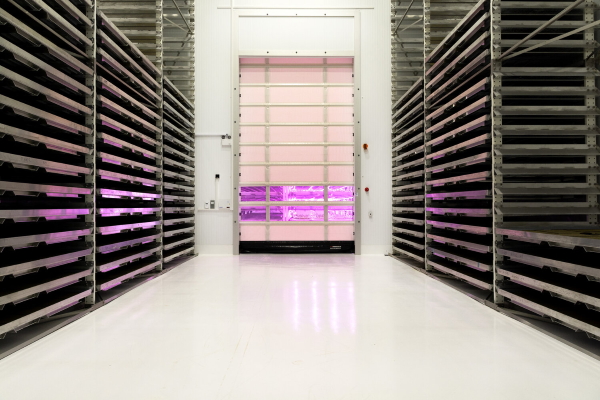 An inside view of Jones Food Company

And the growth for Jones Food Company doesn't stop there. At the end of the presentation, James unveiled his plans for the future: by the end of 2021, two new farms will be built in the UK, with an area of 30,000 m2. In addition, the company will continue to scout for talent, and in the first quarter of 2021, they are planning to launch a new retail brand.

"Vertical integration is key"
Next up was David Rosenberg, who introduced his company AeroFarms and the way they work. Having been in business since 2004, they've built ten vertical farms to date, and they're in the process of building one that's twice as large as the biggest one in the world. 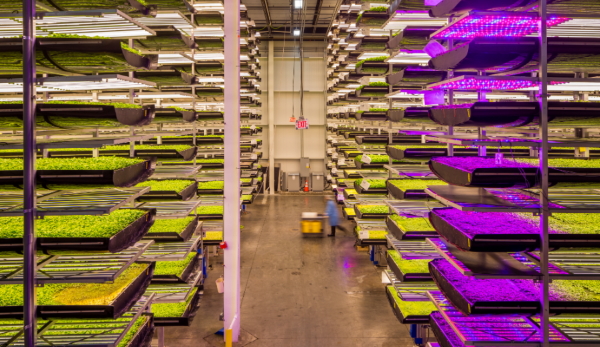 When it comes to choosing new crops, David notes that what works as a small farm doesn't necessarily translate to a big farm. That's why at AeroFarms, they go through three stages when making this decision:

This doesn't just apply to crops, by the way - this way of working is just as important when it comes to choosing the right tech. "We pride ourselves in not re-inventing the wheel in automation", David says. "If someone has a better mousetrap, we'll use that. This is a hard business, and to be really good at it, vertical integration is key."

He also stressed the importance of sanitation in the industry, saying it's bad to cut corners there. "I hope we're diligent about that and processes around food safety. After all, we're talking about people's lives here."

And like James, David also had some news to share about the company's future plans. They're currently building what they say is the world's largest R&D indoor vertical farm, as part of an investment of $100 million by the Abu Dhabi Investment Office. Phase 1 of that project is slated to be operational in late Q1 2021.

3-E and 5-D
David Farquhar was up next to talk about the way they do things at Scottish vertical farming company Intelligent Growth Solutions (IGS). "IGS was founded by a farmer, which is why we focus so much on getting crop production perfect", he explains. The way they work is they basically take a traditional open field, cut it up into pieces and stack the pieces on top of each other in towers.

Of course, things do get a bit more complicated with all the tech added into the mix. At IGS, they call it Total Control Environment Agriculture (TCEA). They cultivate their crops 100% IOT-enabled, making use of cloud computing in an Intelligent Grid that was originally for lighting, but can also be used for other links in the chain, including the retail stage.

David then went on to share the philosophy behind all this high tech. First of all, there's the 3-E targets: Excellent quality produce, Economic competitiveness, and Environmentally friendly. In order to achieve these high standards, IGS makes use of the 5-D way of working.

Replicating real weather conditions is an important aspect of the way they work at IGS, and they see weather as three-dimensional (3-D): there's the sun, wind and rain. Of course, David explains, each of these have multiple varieties (between eight and ten each), and each of these variables has almost infinite values. Take light, for instance, which comes in an almost infinite spectrum of colors. David compared it to paying a visit to the hardware store when you want to repaint your bathroom: the array of available colors is dazzling.

Time is also an important factor, it's the fourth dimension in the 5-D equation. At IGS, they give the crop what it needs at each stage in its life cycle, from darker and humid conditions in the germination stage, to a lighter environment later on in the crop life cycle.

And finally, there's the dimension of space: each shelf in an IGS tower is its own microclimate - the temperature can differ quite a bit between two of those microclimates, even though they're only 30 cm apart. That way, they can grow a wide variety of crops in a single tower. "Whatever we're growing, we want to replicate something that's as close to nature as possible." 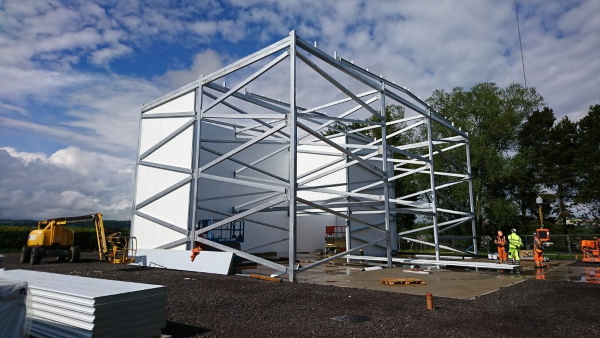 An IGS facility under construction

"Pay the farmer, not the doctor"
Mike Zelkind of 80 Acres Farms focused less on technology in his presentation - he put the spotlight on the consumer: what do they want? As Mike highlighted, consumers are looking for health and nutrition, flavor and freshness, sustainably-grown products, and trust and transparency.

What they're being offered in the fresh produce market, however, is all about price - it's what Mike calls the '10 cents less mentality'. "There's a race to the bottom, because growers don't believe their produce is worth 10 cents more. The whole category has been commoditized, but produce shouldn't be a commodity." Mike believes that vertical farming can bridge the gap to what the consumer wants, and thus stop this race to the bottom.

To do this, it's important for vertical farmers to understand how to do business. One way to contribute to the advancement of the industry, is by forming true partnerships and ego-less collaboration, Mike argues. "That's why years ago we started looking for partners willing to play by the same rules, so we formed Infinite Acres with Priva and Ocado."

In addition to partnerships, data also plays a big role in vertical farming - both in terms of plant science and predicting customer demand. At 80 Acres Farms, they develop machine learning models to allow them to understand their customers' shopping trends and forecast future demand.

One trend they are looking to reverse is that of increased spending on healthcare and decreased spending on food, as the graph below illustrates. "Your grandparents spent more on food and less on healthcare", Mike says, adding that's it's time to reverse this trend - things like COVID-19 have highlighted the need to focus more on preventative care through healthy eating, like people did in the past. As Mike puts it: "Pay the farmer, not the doctor." 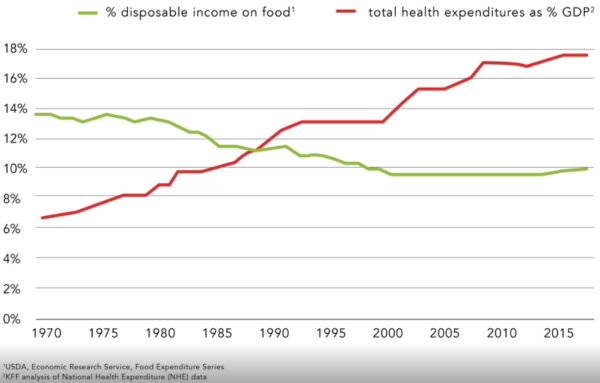 The Vertical Farming World Congress, organized by Zenith Global, is held online September 22-24. We'll post updates from the virtual conference floor in the coming days and weeks, so watch this space for more like this.