Astronauts and cosmonauts spend a lot of time aboard space stations - sometimes more than a year at a time. When you're up there that long, it would be nice to bite into some freshly grown vegetables. Particularly if humans will return to the Moon or even go to Mars, it's essential to be able to grow fresh food there. Researchers are looking into the unique challenges of growing space veggies, learning a thing or two about cultivation on Earth in the process. One of them is Jacob Torres, who works at the Space Crop Production Lab at NASA’s Kennedy Space Center. In a recent webinar, he shared his experiences conducting space agriculture research.

Jeff Kohler, who supports the Technology Transfer Program at NASA and hosted the webinar, said he met Jacob Torres about a year ago, when the latter submitted a proposal for a new plant nutrition system. Jacob was raised in a traditional farming community in New Mexico, so it's not entirely surprising that he ended up working in agriculture, albeit controlled environment agriculture.

Tap to pollinate
Kicking off the webinar with a video shot in one of his plant growth chambers, Jacob explained why (chile) peppers are particularly suitable to grow in space. First of all, there are no pollinators in space - you can't just open up a box of bees inside a space station. "With peppers", Jacob explains, "you can tap on one of the flowers, then a pepper starts to grow." This makes peppers more suitable than crops like cucumbers, which do require pollination. Another advantage is the high nutrient content of peppers, making them a welcome addition to the astronaut diet. And last but not least, peppers are both fresh and spicy, adding extra flavor to space food, which can sometimes taste bland due to the way taste buds behave in space. 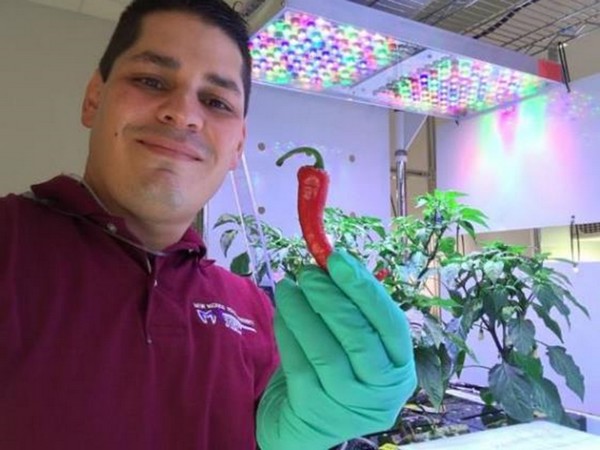 Moon and Mars missions
The research Jacob and his team carry out at the Kennedy Space Center, serves astronauts on the International Space Station (where they use systems like Veggie and the Advanced Plant Habitat), but they're also looking at the bigger picture. With the Artemis program, NASA is looking to put people on the Moon again, and they also have their sights set on Mars. On those longer missions, astronauts will spend a lot of time in deep space such as on Gateway space stations, and later on the red planet itself, where they will appreciate having fresh grown food and fresh food will supplement the packaged diet. The main idea behind this is to add more vitamin C, K and B to space traveller's diet, which will be the team's mission for the next 10 to 15 years.

Spare parts
No matter how advanced NASA's technology may be, it's only a matter of time before a part starts to fail. "When this happens on the Moon, you can't just go to a shop to get spare parts, or order them through Amazon Prime - not yet at least", Jacob jokes. So what do you do then? When an acid addition pump in one of Jacob's NFT channels disintegrated, he found out it took two weeks to have a new one shipped. "Hand mixing the pH or stopping the experiment was not an option." Instead he had the disintegrated part 3D printed, and the system was back up and running in no time.

A bit of New Mexico on Mars
With the technical details sorted out, the next step is to figure out what variety of pepper to use. "So we hit up the literature to see what work had already been done and demonstrated. In New Mexico, chile peppers are a big part of the culture, so graduate students and professors have been writing research on that for over a century." Gathering pepper seeds from all over the world, it was found that one particular New Mexico pepper performed really well: Española Improved, a hybrid between Big Jim and Española peppers. Española also happens to be Jacob's hometown - "I'm really stoked about that", he commented. 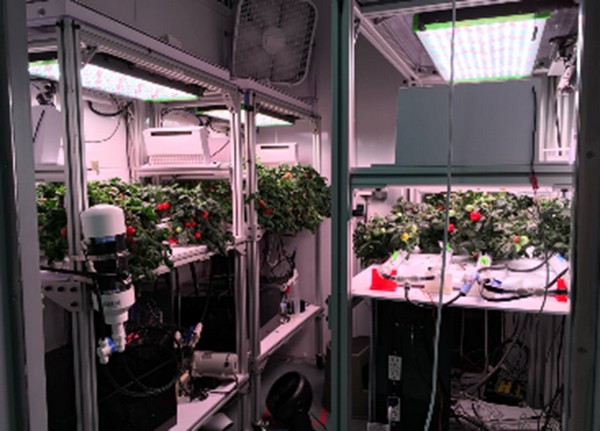 Light recipes
The Advanced Plant Habitat, one of the NASA-developed plant growth systems that Jacob works with, features LED light banks with all frequencies, provided by OSRAM. With the system, colors in LEDs can be adjusted, even the UV, to create recipes for specific crops (leafy green, peppers, and so on). Technology like this is absolutely vital in astrobiology, Jacob explains. "Growing crops won't be a primary thing that astronauts have time to do." In addition to the light recipe system, hyperspectral imaging to monitor crop health will also help them with that, and it may even work better than the human eye, according to Jacob.

Irrigation without gravity
Another issue when growing without gravity is irrigation. When you wring a towel in space, the water just sticks around the towel, as demonstrated in the video below by Canadian astronaut Chris Hadfield. "The same thing happens with roots", Jacob explains. "Existing hydroponic systems are largely inoperable in microgravity." (The current system uses time-released fertilizers, but they would like to use a hydroponic system at some point.)

To find a solution to this problem, several candidate microgravity systems were tested against a control system. "Irrigation systems for microgravity should be sustainable, ideally even with reusable plant medium you don't have to throw away, featuring low heat production and energy use, minimal failure mode (without a pump, that would be awesome), reduced crew interaction, and it should be scalable. You should be able to do science on it, then scale it up to do crop production and grow a lot."

PPTNDS
The Passive Porous Tube Nutrient Delivery System (PPTNDS) was the solution to the irrigation problem, using the capillary force of water to force water up. "You can wick water up, the water evaporates from the tube, and water from the bag then replenishes it."

Jacob and his team used water bags like the ones used on the International Space Station, which they connected in a loop to the hoses. They put seeds on top of the tubes, wrapped them up with wrap, added water, air, light - and the crops started to grow, much to the team's delight. 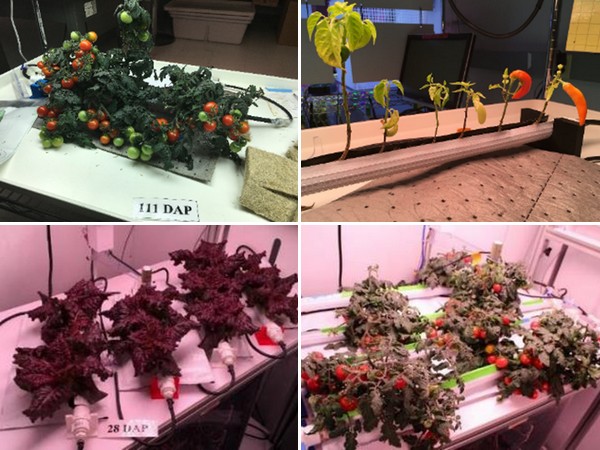 Jacob grows lettuce, peppers and tomatoes in the PPTNDS. The Red Robin tomatoes (top left) were still going strong 111 days after planting. The peppers (top right) didn't fare so well, but given that Jacob had forgotten about them for weeks, if not months, it's quite impressive that they still bore fruit.

Back on Earth
So, what does this all mean for the non-astronauts among us? Well, in industrial cultivation, the PPTNDS could see use in the top layers of vertical farms, which can't be visited that often by growers. In education, teachers can use it to teach students about agriculture in a system that basically grows itself, and it could even be marketed as a novelty item to consumers, Jacob believes, using the slogan "Developed by NASA". NASA’s expertise in space and scientific exploration contributes to essential services provided to the American people by other federal agencies, such as weather forecasting and natural resource management. The agency freely shares this unique knowledge and works with institutions around the world.

If you're looking to get involved in the agricultural space race, you can participate in the Space Chile Challenge, to grow the hottest possible space pepper. Later this year, NASA will also open up the Lunar Nutrition Challenge, asking the public, academia and industry to develop and demonstrate food production systems suitable for future space exploration. Registration for that is expected to open in late 2020.