"Vertical farming is a part of New Zealand's future"

As opposed to traditional incandescent hydroponic lamps, the LEDs that feed the plants light are cool to the touch, and can be frequency controlled to improve productivity - they grow the shoots around twice as fast as their halogen counterparts. Microgreens are the intense flavoured first shoots and leaves that grow from a seedling, and are popular amongst chefs and bartenders for garnishing both meals and cocktails. Many familiar leaves can be used as microgreens – including mustard, basil, rocket and coriander.

The LED grow lights, supplied by Holland Solutions and co-funded by EECA’s Technology Demonstration funding, has enabled the business to be established. Compared to incandescent lights, The LEDs conserve 45 percent more lighting electricity, in this case saving the business around $25,000 a year on the power bill.

The LED grow lights have customisable spectrums of light, which means that the colour of LEDs can be adjusted to optimise the growth of each specific variety of microgreens. As the LED grow lights do not produce heat, they can be stacked at every vertical layer, with no risk of heat damaging plants, as with incandescent hydroponic lamps.

The central location means microgreens grown at Shoots are easily transported to local restaurants and bars – saving on costs and carbon emissions of transporting microgreens from further afield. Customers include well-established Wellington favourites such as Capitol, Shed 5 and Monsoon Poon, all located within a short trip from where the microgreens are grown and delivered on a custom-built bicycle. The microgreens arrive still growing in their reusable grow trays, with biodegradable grow mats that sprout the plants. Empty trays are returned to Shoots to be reused. 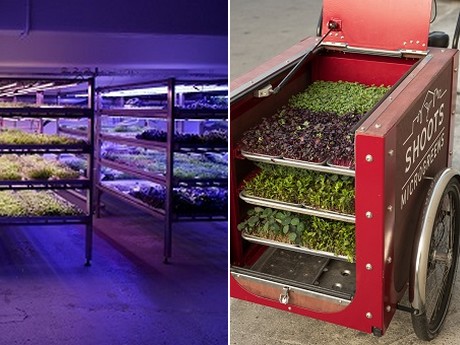 An indoor farm avoids many of the problems that come with growing microgreens in the great outdoors; no chemical pesticides or weed sprays are needed in this controlled environment. Plants can get optimal delivery of ‘sunlight’ through the LEDs, and these can be adjusted to mimic longer sunlight hours, which is why the plants grow around twice as fast. The temperature, air flow and water supply to microgreens is also carefully tailored to suit the plants, seeing the business use 95% less water than a traditional farm

“EECA works across a range of businesses, both large and small, to demonstrate energy efficiency gains that can be made. This project not only shows potential for LEDs to reduce electricity use and increase productivity, but is a great example of reducing transport related emissions. In this case, supplying locally eliminates the equivalent annual carbon emissions of taking 20 cars off the road."

For an ever expanding population, the benefits of food grown in vertical farms is clear – as it can save up to 6 times the ground space that conventional farming uses. Keltie is excited about the prospect of replicating his operation in other cities around New Zealand.

“Vertical farming is not a replacement for traditional New Zealand farming yet, but definitely part of our future. We are looking at helping to reduce food transport emissions further by expanding our operation to other cities like Auckland, and growing more varieties of edible plants.”