If it was up to cucumber grower Louis Chibante, year-round production would become the standard in Southern Ontario. During the Canadian Greenhouse Conference Bus Tour, the cucumber grower from Golden Acre Farms welcomed us into his advanced greenhouse, to showcase his experience with supplemental lighting in a high wire production system.

After several years of extensive trials with both LEDs and high pressure sodium, Chibante will soon start the installation of HPS top lighting in a large part of his relatively new 21 acre greenhouse. 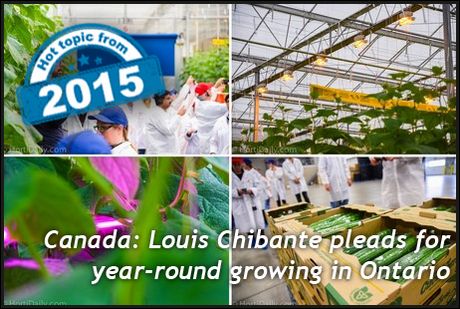 During the tour at the Kingsville greenhouse operation, Chibante explained why they still prefer HPS over LEDs. "HPS is the way to go for us, it provides a better return of investment. LEDs still remain high priced, while the production is more or less the same. Maybe in the future, when the cost of LEDs further decreases, they could become more affordable for use in greenhouse growing in our area. Maybe the hybrid combination of LED and HPS will eventually become the most interesting then."

When Chibante built the 21 acre greenhouse in 2011, he did not install the supplemental lighting. "At that time, there was a lack of electricity in this area. But things have changed over time."

Chibante said that he is currently in discussion with local power suppliers. He pleads for better circumstances for year-round greenhouse growing in Southern Ontario. "Canada is exporting all of its electricity over the border to the United States, where our competitors use it to light up their greenhouses. Why don't we keep the electricity ourselves and use it for our own greenhouses? If they sell it to local growers for a good price, it contributes to the local economy as well."

Besides discussing supplemental lighting and energy supply, Chibante furthermore showcased the rest of their operations, including the futuristic robotized packing hall.


Click here to view the complete photo report of our visit to Golden Acre Farms.

If you would like to join the Bus Tour next year as well, please contact the Canadian Greenhouse Conference at : www.CanadianGreenhouseConference.com  or send your requests to Glenna Cairnie (e-mail).