Diversity is key at Erieview Acres

At Erieview Acres in Kingsville, Ontario, the brothers Norm and Rob Hansen are running a very interesting organic greenhouse operation. It is not a standard organic operation that just follows the rules of organic cultivation. Their philosophy: diversity is key. 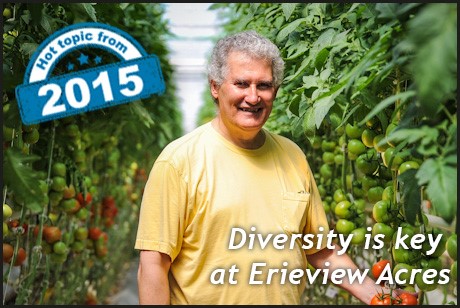 And so this happened; together with his brother Norm, Rob Hansen now runs two organic greenhouses in Ontario. They have six acres with tomatoes on the vine and two acres with high wire mini cucumbers. They were so kind to open the doors for HortiDaily.com for a tour at their tomato production greenhouse.

When I entered the greenhouse, the first thing that caught my attention were the numerous amounts of other crops besides the tomato crops. In the entrance corridor there was a row with high wire eggplants, while in the greenhouse itself every row with tomatoes first started with a Mullen plant to shelter Dicyphus Hesperus. According to Hansen, this all had to do with their philosophy of growing in a biodiverse setting; Erieview Acres avoids monoculture and gets the most out of their crops with the help of as many natural mechanisms as possible. 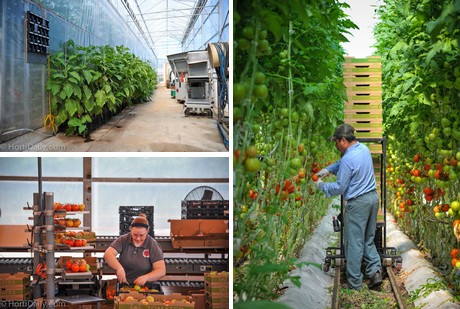 Hansen is a forward thinking grower. When we asked him about the varieties he was using, he soon started to discuss the varieties from Monsanto's De Ruiter Seeds that he was using. He mentioned that whilst there may be a group of conservative organic growers that would never allow the entry of seeds from Monsanto inside their operation, he said that he would rather see more adaptation of knowledge from companies like Monsanto inside the organic industry. "The breeders of Monsanto and De Ruiter have great knowledge and information available that benefits organic growers as well. This knowledge can also be translated into other useful applications, think about breeding beneficial micro organisms and bacteria, which could bring the organic industry to the next level as well."

Click here for the photo report of my visit to Erieview Acres.