"You ask yourself why this isn't done more"

Casey Houweling is about to reach another milestone this December, when his most recently built Ultra-Clima greenhouse in Utah will be connected with PacifiCorp's Rocky Mountain Power Plant. After years of planning, the construction of the flue gas canal is nearing completion and is ready to supply the forward-thinking tomato grower with low grade residual heat and an unlimited supply of CO2.

Houweling planted the first tomato crop in the Utah facility in December 2014. Since then, the operation has been running on the heat and C02 from the natural gas back-up boilers. Right now, the second crop is interplanted and the installation of the supplemental lighting has been completed, ready to pull the crops strongly through the darker winter period.

"We’re now actually getting towards a more normal situation, once we’re tied to the power plant,” Houweling said. "The flue gas from the power plant will be around 100 degrees Celsius, which will be transformed into low temperature heating water of 50 degrees Celsius." This is hot enough for use in the Ultra-Clima, as this greenhouse is especially designed to take complete advantage of the heat, with the combination of pipe rail heating and radiators. Together with the minimal venting strategy and the ability to achieve higher CO2 levels in the glasshouse, Houweling's will transform the residual heat and CO2, that would normally have been wasted, into millions of kilos of sustainably produced tomatoes. 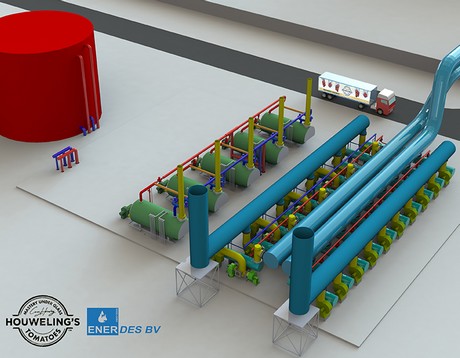 This technical render shows the buffer tank, the back-up boilers and the large flue gas channels that are connected with the power plant on the other side of the road.

The completion of the connection with the natural gas power plant in Mona comes a year behind the completion of the 28.3 acre patented Ultra-Clima greenhouse structure at the site. According to Houweling, this is the result of the complexity of the project and the regulatory environment. "We built the structure in less than half the time that it took to complete the flue gas canal between the existing power plant and the new greenhouse. But we weren't expecting that it would go just as fast, as we were doing it for the first time. The parties that we are dealing with in this first of its kind project are huge, and everybody had to deal with unforeseen things that nobody ever really thought about, despite the fact that the idea behind it is not more different or complicated than having a co-generation plant." 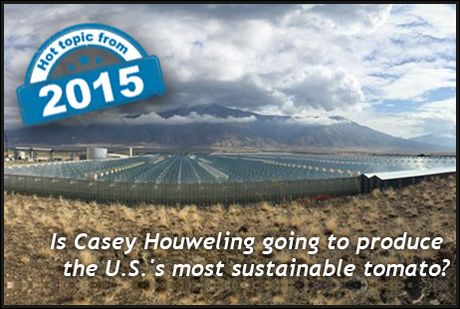 On the left you can see the 550MW Power plant that will supply the greenhouse with the residual heat and CO2 from the exhaust gases.

Houweling's drive behind the realization of such a one-of-a-kind project is inspiring. Over the last couple of years, the grower came up with more of these complex ideas. He was one of the first North American greenhouse growers that adapted cogeneration and he invented the patented and Kubo-built Ultra-Clima greenhouse, which allows local, consistent year-round production in any climate. It was not uncommon for him to work closely with suppliers of Dutch greenhouse technology, but in regards to achieving the perfect climate in the Ultra-Clima, Houweling prefers the Canadian-manufactured greenhouse control system from Argus Control Systems Ltd.

Also, for his new Utah greenhouse operation, Houweling approached Argus, as the project demanded a completely new system, something that was not readily available. "The current offerings for greenhouse control systems on the market are all designed to control a basic greenhouse operation. Once you start working with different things like Ultra-Clima and connecting to a power plant, there are a whole bunch of controls that you need that are not really 'greenhouse' related, but more industrial related. In these kind of unique projects you need to have a control system that is very flexible. It must be easy to write the programming for it, and it must be able to be tweaked from a very simple method. On top of this there are a whole bunch of other requirements in such a complex project, that a standard greenhouse control system would never be able to meet these requirements.”

For Houweling, Argus Controls was the preferred developer of the greenhouse control system, as the supplier was able to develop 95% of the entire system over the internet. As well as this, Argus has a team of developers directly available for the grower. Houweling; "Their team is extremely flexible. The fact that they are based in North America made them able to achieve results over a relatively short time. What we could probably do in six weeks with Argus, would take us six months to a year to get done with an European supplier." 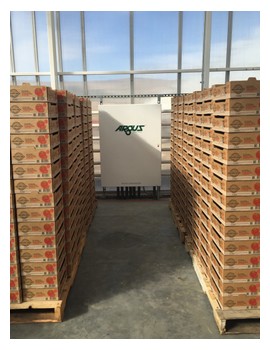 Yurij Duda, General Manager of Argus, said "Our team of developers are always available to get involved immediately. Also, in this complex and unique project, our programmers and servicemen always have direct access to the developers, to create tailor-made systems for the grower. For us, as a developer, there was no question about doing this. In terms of scale, it is one the largest monocrop vegetable operations that we have been working on, and we enjoyed it, it was quite exciting."

Once Phase 1 of Houweling's Utah greenhouse is connected to the power plant, the entire operation will be controlled within the platforms of Argus Controls; from irrigation and fertigation to heating, climate control and many other requirements related to the interconnection with the power plant.

The capacity of the heating and CO2 supply is enough to realize 4 phases of 28.3 acres each, to a total of 113 acres. "We will have to see how it goes and how the demand for our products continues to grow, before we start with the second phase. These things require a lot of capital, and management. One of the worst things that you could do as a grower is expanding too fast. You need to keep up with your infrastructure, staffing, management."

In order to manage his remote sites, Houweling travels a lot, despite the fact that present day advanced automated monitoring and control systems enable growers to 'grow by wire’: "I visit each site once a week."

Still, Houweling said that each new venture he starts is exciting. Based on the success of this concept, other North American growers might look at his model and realize that they need to do something similar soon. Something that is possible, as there are large power plants available in the widespread continent.

"Energy is quite a big issue in European greenhouse horticulture, and when you look at our project you ask yourself why this isn't done more in the U.S. Particularly now that coal is the newest gray evil and more big and smaller distributed power plants are being constructed. Together with the amount of press being involved in today's climate in regards to global warming and CO2 reduction, it will get quite a lot of attention from industries and governments. Hopefully this will bring more of these energy-efficient projects onto the radar of more governments and growers."

For more information on Argus Controls: