The raspberry harvest at McIntyre’s Fruit in Blairgowrie is just about to get underway with the long cane production. The company has its own nursery and keeps the plants in cold storage over winter, sequentially releasing them in March and April to get a good production curve.

“Scottish raspberry harvesting usually starts in July, but we can start earlier at the beginning of June, and we keep going until August when the cherry harvest starts. This enables us to better utilize our labor,” explains Matthew McIntyre.

McIntyre’s stopped growing strawberries last year as it was not economical, and investment was needed. 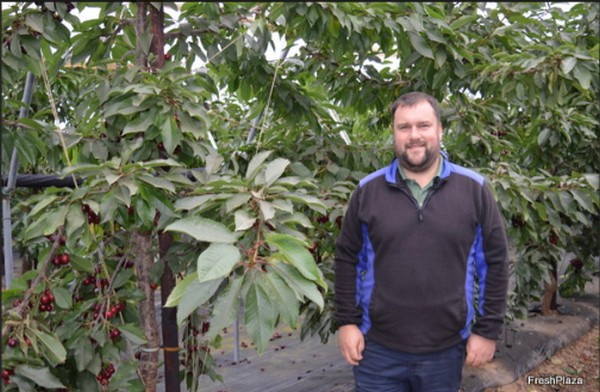 The company is one of only a few which grows cherries in Scotland, the only Northern Hemisphere country still producing cherries into September.

“The cherry trees are pollinated, and the fruit set has begun, we are waiting to see the results, but we think the crop will be down on previous years, probably down to the weather.”

“The timing will most likely be normal this year, and we are keeping an eye on the Midlands to see what happens with their late varieties as the harvest could coincide with ours and affect prices.”

Matthew said that he thinks he will have enough labor as the numbers are encouraging but is still keeping his fingers crossed as the season is just about to start.

“Our workers are coming from Uzbekistan and Tajikistan, and it is always possible that flights may be disrupted by the Ukraine conflict. We used to have people from Romania and Bulgaria, but this has stopped since Brexit.”

Interestingly Matthew said that language was not such a big problem as you might think, as some of his older Polish workers learned Russian at school and so they can communicate with the people from the ex-Soviet countries.