When Gary Taylor returned to his role as nursery growing manager at Valley Grown Nurseries, he noticed that all was not quite as it should be with the irrigation system. The business grows 9 hectares of peppers and 3 hectares of tomatoes under glass near Nazeing in the Lea Valley on the Essex/Hertfordshire border for the UK’s leading supermarkets. Finely balanced margins are dependent on achieving top yields and quality, so there is no room for error. Every plant’s needs for water and nutrition must be met exactly using four drip irrigation networks across the site, so Gary made it a priority to investigate what was happening and put it right.

Closer inspection revealed that the system was becoming clogged with biofilm, a layer of organic and inorganic material that lines the inside of pipes and emitters. The problem had been building over several years since the irrigation system was installed, restricting water flow and leading to uneven application across the site, and occasionally blocking drippers completely. 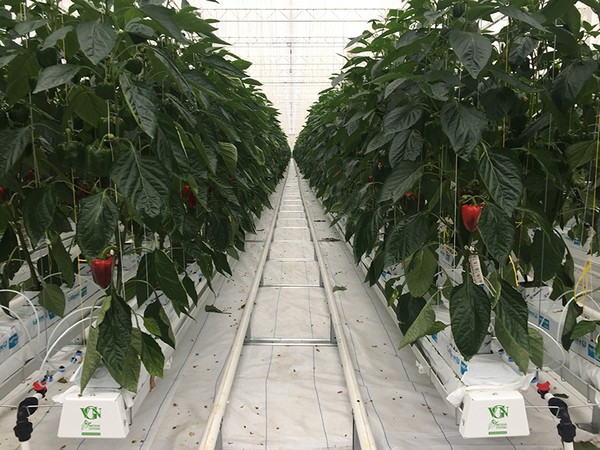 Pathogens
Biofilm also harbors many pathogens, including bacteria, fungi, and oomycetes, which can multiply and eventually infect plants. “I noticed higher than usual levels of pythium and phytophthora, particularly in the peppers,” says Gary.

“This, coupled with the uneven watering and nutrient application, was becoming evident in areas of uneven growth and small but concerning patches of stunted and wilting plants. A few plants were dead or dying, and there were dry bags towards the end of the lines, which was starting to affect production, and we were getting more uneven fruit size than I would like – we have to work to very tight tolerances."

“It’s difficult to say what it might have been costing the business, but with nearly 300,000 emitters on-site, there’s a lot to go wrong. It was obvious to me that something needed to be done.”

In the short term, Gary compensated by applying more water. “We usually work to 20-25% drainage but increased this significantly. Although we recycle the drained water, we had to apply more and of course, we then ran the risk of over-watering some areas.”

He called on Agrovista glasshouse specialist Roger Beard to talk through the problem. “I’ve known Roger for years – he supplies all our crop production inputs and a range of sundries, and I value his opinions and trust his advice. He always steers me in the right direction.”

Reservoir water
The business uses reservoir water, which is piped into the central filling system that fills the four-day storage tanks that supply the glasshouses.

“I didn’t think the system was being utilized correctly or efficiently enough and Roger agreed,” says Gary. “The reservoir water was being sterilized with UV light as it was piped in and the central tank was being dosed with hydrogen peroxide, but, by the time the water was getting into the system, protection was already being compromised, to the point where there was probably nothing left by the time it got to the extremities.”

“Quite a number of growers are now using the product for various disinfection processes and more are becoming aware of its potential to provide continual cleaning of irrigation pipes throughout the season when crops are growing, rather than just end-of-season cleansing,” says Roger. “This is not only important for established systems, but also for new builds where producers want to keep their lines clean from the start.”

Sample testing by Nigel quickly confirmed the problem, revealing high levels of microbial growth and low oxygen levels in the water. After conducting a site survey, Nigel agreed with Gary and Roger’s thoughts. The first task was to apply a shock dose at the end of the season, which was left in the pipes for 24 hours before being flushed.

This shock dose was applied using Huwa-San TR-50, a stabilized hydrogen peroxide product that retains its sterilizing activity much longer than standard hydrogen peroxide, increasing its efficiency and enabling lower doses to be used.

Nigel says: “Biofilm is an all too common problem in irrigation systems and can cause significant issues. The key is to eradicate it quickly and efficiently. Huwa-San TR-50 is proven throughout the UK and EU horticultural sectors so growers can use it with confidence.”

Shock disinfection
Emitters associated with dry slabs were also changed to ensure drippers were working effectively. Once the shock disinfection was complete, the irrigation systems were continuously dosed using a very low rate of Huwa-San TR-50.

Six pumps, two for each for the larger glasshouses and a single one for each of the smaller glasshouses, were installed to ensure a constantly calibrated supply of Huwa-San TR-50 to the irrigation networks.

Hydrogen peroxide test strips showed the product was getting right through to the last drippers in the system. Water testing carried out by Nigel, six weeks after the plan was initiated, underlined its efficacy, revealing a 100% reduction in total viable count, a test that estimates the level of microorganisms in water.

“Nigel is due to come back to check levels, and I’m pretty confident all will be well,” says Gary. “Plant growth and fruit size is certainly more even and we’ve seen a drop in the amount of class 2 fruit compared with last season.

“It hasn’t been so hot and sunny, which might have helped, but I’m sure some of that improvement is down to the successful removal of the biofilm this season and the harmful organisms associated with it.”