"Wide range one of the many challenges to reach consumers"

This week, we will start presenting individual lectures from the German Fruit and Vegetable Congress 2021, starting with Max-Henrik Fabian from IFH Cologne. He says that consumers have never had so many options for shopping as they do today. This wide range should be understood as one of many challenges for retailers and suppliers. Fabian presents the "Shopping Point Portfolio" created by IFH Cologne to classify different consumers' consumption behavior. 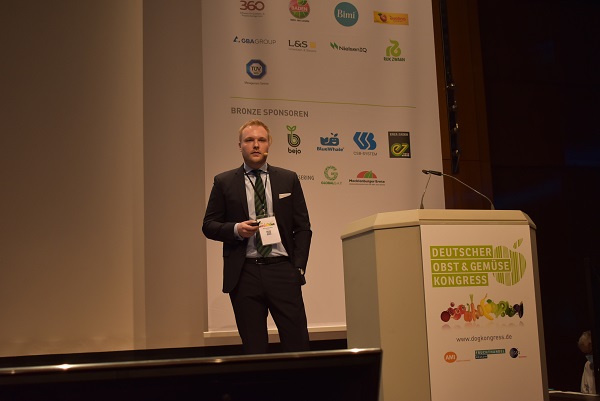 Convenience, online affinity, and sustainability
Fabian highlights three aspects retailers will have to reckon with in the future: Convenience, online affinity, and "sustainably-minded consumers." He says 77% of consumers care about less time spent, 60% are bothered by large crowds of people and long waiting times, while 85% sought out grocery stores where they can do all their shopping.

To better illustrate this, IFH Cologne has created a so-called "shopping outlet portfolio" to track the consumption behavior of specific consumer groups. In this context, discounters and supermarkets are to be found among all consumers as a point of purchase. Although sales for online stores have increased, virtual stores should only be seen as a supplement to stationary retail. At the same time, according to Fabian, classic "window shopping", for example, has seen a decline of between 16 and 17%.

Winners and losers in 2020 as compared to 2019
The high competition levels - Fabian is talking here, among other things, about specialty retail, hypermarkets, convenience sales (gas stations, etc.), weekly market, etc. - has been dynamized in the last year. Functional online retail, which includes stationery retailers and manufacturers, can be seen as the winner with a 42% increase in sales. However, other online retailers were also able to enjoy an increase of 41.5%. 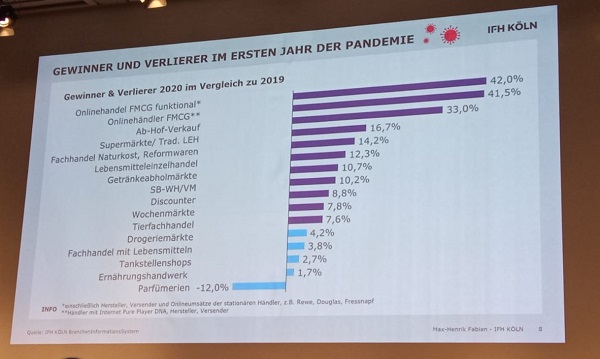 During Corona, about +17% of consumers planned their purchases by a week, while +6% planned two to three days in advance. Online grocery shopping could be attributed to both convenience and a different consumer attitude of entitlement. After all, 39% bought fruits and vegetables online, citing convenience as the main reason. Despite the fact that the absolute growth rate in online retail in Germany tripled in 2020, fruit and vegetable sales are still not that profitable, Fabian points out, using Gorillas as an example.

After all, fresh fruit and vegetables usually end up at the bottom of the list when it comes to grocery shopping. The list is topped by non-perishable foods, beverages, goods, etc. Fabian, however, suspects that a trend reversal will soon emerge: "I am certain that online grocery is still strongly below its potential. This is due to an extremely limiting factor, namely delivery area coverage. According to a 2019 study by IFH Cologne, only 19% of the population has the option of ordering groceries online. The focus is on metropolitan areas such as Hamburg, Hanover, Berlin, Frankfurt, Munich, or Nuremberg. After all, 60% of the population lives in these metropolitan areas." 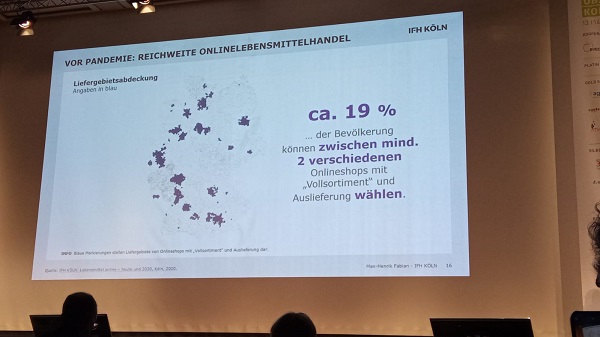 New players change the market
In 2020, many new players came into the picture and changed the dynamics significantly. Fabian again cites the Berlin-based company Gorillas as an example. Founded in May 2020, it began deliveries as early as June 2020 and was able to take over 2.5 million orders. Other companies, such as Picnic or Flaschenpost, have also provided considerable momentum, he says.

The business model is not yet profitable. However, the example of Zalando, a fashion and accessories retailer, shows that the potential of this business model would have to be re-evaluated in the future. Fabian: "We conclude that due to the change in consumer behavior, this development will accelerate enormously."

Organic markets: sales of 14.9 billion euros
At the end of his presentation, Fabian addresses other aspects such as sustainability and online affinity. According to the report, organic markets in Germany would have generated sales of 14.9 billion euros in 2020. But the topic of healthy nutrition and regionality is also important to many. Furthermore, the number of vegetarians and vegans has also increased. These, in turn, are particularly well informed and "price-sensitive". In order to be able to reach them - but also all other consumer groups - Fabian says: "You shouldn't basically exclude routes to the consumer that exist, but rather reach the consumer with a widely diversified portfolio." 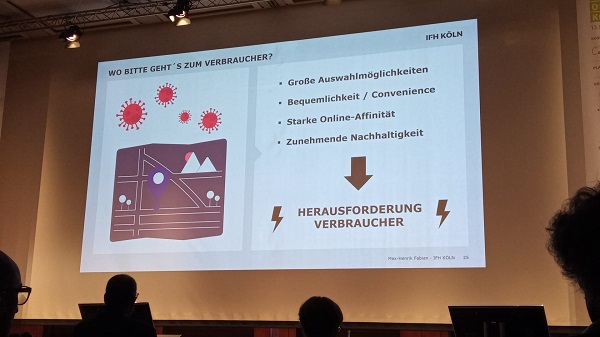 Our photo reportage on the German Fruit and Vegetable Congress 2021 can be found here.