"As fruits ripen, they become more attractive to molds"

Each year, roughly 25 percent of the fruits and veggies produced across the globe are lost due to fungal diseases. In fleshy fruits, like tomatoes, this issue is more pronounced, especially as they ripen. Researchers from the Blanco Lab at the University of California, Davis, in collaboration with researchers from University of Nottingham, have demonstrated how susceptibility factors that accumulate during the ripening process promote infection by fungal pathogens.

Barbara Blanco-Ulate, assistant professor in the Department of Plant Sciences, led the research team, which studied both the infections caused by three different postharvest fungal pathogens in tomatoes and their specific responses to them using mutant genomes defective in the ripening processes. “This project has helped strengthen our work in fruit-pathogen interactions, an important focus area of the Blanco Lab research program as a whole,” said Blanco-Ulate.

Maturing tomatoes, or those that are still in development with a green color, are resistant to molds because their active responses and preformed defenses are greater than the threats of potential diseases. This changes when the tomatoes become red and ripe, as their components contributing to vulnerability greatly increase. 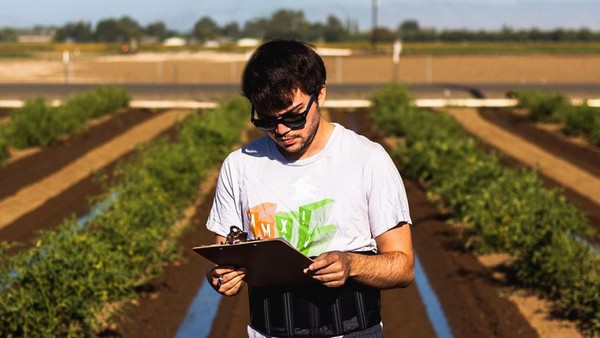 “As fruits ripen, they undergo a lot of complex changes, often becoming more flavorful, more colorful, and softer,” said Christian Silva, a researcher on the project and fourth-year Ph.D. candidate in the Blanco Lab. “Unfortunately, these changes also bring with them an increased susceptibility to molds.”

Genetic processes
Studying ripe, infected tomatoes, like those ridden with mold, the researchers looked for the genetic expressions occurring inside the fruit during the ripening process to find the genes most associated with the increased susceptibility.

The researchers identified the gene pectate lyase, an enzyme that normally functions as a means to soften the fruit tissue. When the specific gene was removed through CRISPR gene editing, the susceptibility to mold dropped by over 50 percent. While removing such a gene might cause concern for the integrity of the fruit, such as sweetness and other flavor attributes, Silva maintains that the aim of this type of research is to resolve susceptibility issues without altering quality. 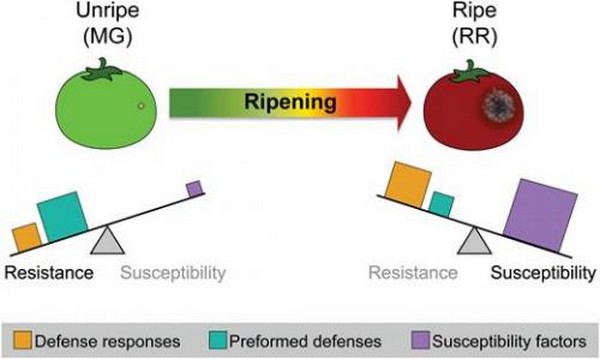 A model illustrating how the balancing-act of components driving disease resistance and disease susceptibility changes during the ripening process of tomatoes.

The team hopes that this project encourages further investigations into the underlying physiology driving fruit-pathogen interactions, something they recognize is greatly under researched.

“The agricultural pests and pathogens that get studied are predominantly those that impact yield and quality at harvest, and yet, approximately a quarter of all these harvested fruits and vegetables will be lost to rotting caused by fungal pathogens somewhere along the supply chain,” said Silva. "It's important to approach these postharvest pathogens and their interactions with fruits with the same rigor and depth of exploration that we give other agriculturally important pathogens.”

Read the complete research at www.academic.oup.com.