COVID-19 has changed the way Australians eat and shop for the long term. Continued restrictions mean fewer shopping trips, bigger basket sizes, more local shopping, and a significant shift toward buying groceries online. With more meals consumed at home, fresh food has taken pride of place in the shopping trolley. Fresh produce, nature's own immune-boosting food and a key component of meals, has seen a strong uplift in sales since the pandemic hit. Whether stemming from a desire to spend less time in-store or for safety reasons, fruit and vegetables have seen a significant shift to pre-packed produce - now representing more than half (53%) of produce dollar sales in major supermarkets.

Major supermarkets, which account for three-quarters of the market, recorded an increase in produce sales of +11.7% from March to October 2020, and pre-packed produce contributed nearly two-thirds of that growth. Priced on a per kg average 25% higher than loose fruit and vegetables, pre-packed produce has added value to the category. 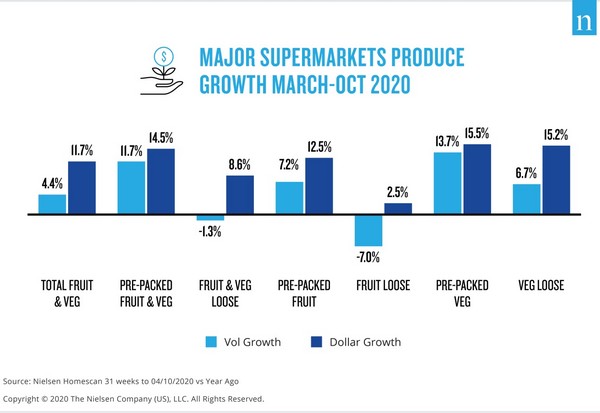 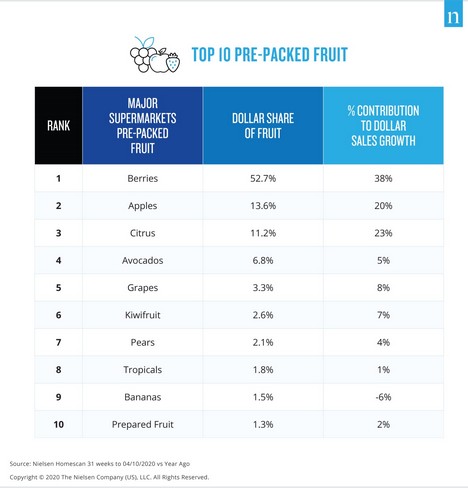 Pre-packed produce enables online sales
COVID-19 has advanced the adoption of online shopping for fresh produce by several years; online produce now makes up 6% of Australian grocery sales, an increase of two share points from the same time year ago. Almost half of the staggering 64.7% increase in online volume sales for total produce was attributed to the pre-packed segment. Traditionally, harder produce such as potatoes, carrots and apples have topped the online produce shopping list; however, pre-packed produce enables softer produce to be purchased online, while also allowing online shoppers to make quick buying decisions without having to worry about additional handling of their produce.

What about sustainability?
Although pre-packed offers a quick, convenient way to shop for produce, sustainability issues pose a problem. Australians use an average of 130kg of plastic per person each year and a mere 9% of that is recycled. Worse still, an estimated 130,000 tonnes of plastic will find its way into our waterways and into the ocean. With ALDI announcing the launch of sustainably packaged produce and a commitment to reduce plastic 25% by 2025 in their stores; and other retailers offering recycling of soft plastics at stores where fresh produce bags/wrappers can be brought in for recycling through the Redcycle program, it looks as if there may be some movement in this space. Consumers who appreciate and support this change may hasten the move, and with continued innovation in this area, reduction of plastic waste in this space is achievable.

The flipside of this, however, is food waste. Almost half of all fruit and vegetables produced are wasted, but pre-packed produce cuts down wastage in-store from transit, and provides additional protection from spoilage at home so consumers can benefit from the extended shelf life.

Both retailers and consumers are realising the benefits of pre-packed fresh produce more than ever before. As well as reducing waste and damage done in transit, pre-packed facilitates correct product scanning at checkout. Benefits to the consumer are longer-lasting produce and fruit and veg that has not been handled by other shoppers; however, having the correct pack size for smaller households and moving toward a more sustainable pre-packed offer will facilitate growth in this space.