How climate screens can guide tomatoes through summer

Although they are innovative but often deliberately not in the frontline, Vereijken Nurseries is the first Dutch company in exposed tomato cultivation where the Harmony 1315 O FR has been installed. "In 2018 we built a new greenhouse," says co-owner Eric Vereijken. "We first looked at the type of glass. Of course, during wintertime, you want to lose as little light as possible. On the other hand, during the summer, very clear glass provides too much light and heat. Especially old or very young crops can't cope well with that."

"Those crop stages are increasingly found in Dutch tomato greenhouses during the summer," says Ton Habraken, climate consultant at Svensson. Growers in the exposed tomato cultivation always used to replace their crops in October. Meanwhile, to be able to spread the production, more and more plants are being planted in the summer, as early as the end of May.

Growers thus avoid a production dip in September and benefit that month from higher prices. The consequence, however, is that a grower with an old crop will grow during the summer, which can be very difficult due to high irradiation. The new plants can also suffer from too much irradiation because the conditions can still be quite extreme. 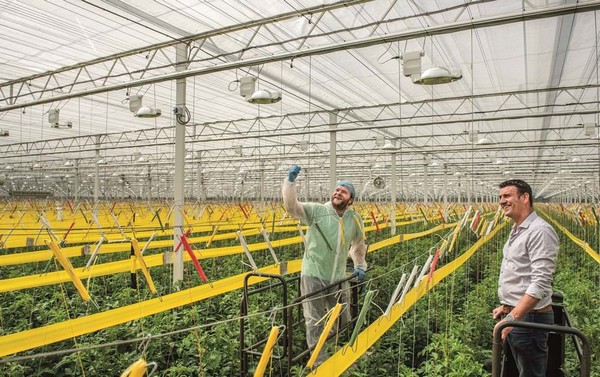 Why chalking is a disadvantage
The plant can face days of 30 degrees or higher, while it is an old crop or a young plant that does not have enough body yet. According to Habraken, a standard illuminated tomato greenhouse does not offer sufficient opportunities to respond to this.

"The Obscura climate screen which is often used is intended to limit light emissions at night. If you close it up to 75% in the daytime, part of your plants will be completely in the shade and another part in the full sun".

The alternative for growers is to chalk the greenhouse deck, which also has its disadvantages. "You miss light at certain times. And there are also days or weeks when you do not need the chalk layer. In short, it does not make you flexible to control the climate."

Why a climate screen is a better option
With the advent of newer types of glass that allow more light to pass through, and thus provide the crop with more energy, the demand for an innovative solution became ever greater.

Svensson then introduced the Harmony 1315 O FR. A climate screen with an open structure, allowing it to be completely closed. The summer screen offers a light screen (13 percent), so the light is not taken away too much, but provides high-quality diffuse light.

The light is thus diffused better and penetrates deeper into the crop. This way, the climate screen also fits in with the philosophy of Next Generation Growing (NGG): achieving optimum results with as little input as possible.

Better crop control
An ideal solution for the new greenhouse of Vereijken Nurseries, where the limitations of using chalk were also recognized. "It is difficult to determine what type of weather is on its way and when you want to use chalk," Vereijken says.

"Moreover, in the morning and later in the afternoon you need the light and with chalk, you will lose 25 percent. With Svensson's new screen we can organize it ourselves. If it is a dark day, you do not have to do anything. If it is a light day, you screen. How long is dependent on the type of plant and the stage it is at. With the screen, you have better crop control." 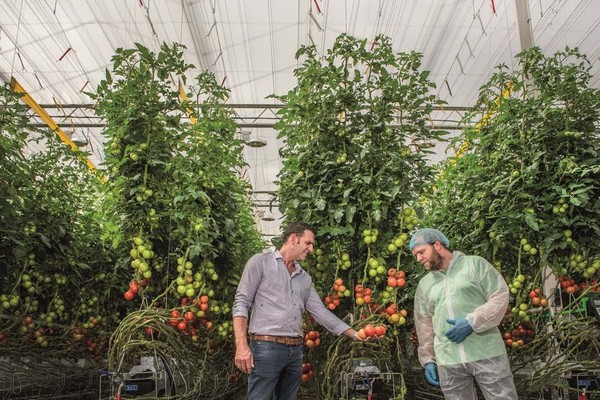 Keeping the young plants in balance
For Vereijken, where the clear glass in the new greenhouse provides a lot of direct light, that is a big advantage. About one-third of the production on the farm is planted during the summer.

"This means that we can avoid a lack of production for eight weeks and we can continue to supply regular customers. However, during summer, the disadvantage is that you must start cultivation at high temperatures and a lot of light. You will need to partially shield that to keep the young plants in balance. With the Harmony summer screen, we can take the peaks out and make it a little easier for the plant to grow."

Preventing radiation
The tomato grower also sees advantages in terms of radiation for which the Harmony 1315 O FR can easily be used. This is an increasing issue in exposed tomato cultivation.

"At the end of the day, we are increasing the screening against radiation. Not only at night, but also in the evening. This works out with a blackout screen in the first place, but if you want to close earlier, you will lose a lot of light there as well."

Habraken: "At a tomato company in Belgium, where we installed the screen, work continues even on very hot days. The staff there does not have to adjust the working hours". Vereijken agrees that the greenhouse climate is more pleasant. "You have less direct radiation, which feels very different. It is the difference between standing in the sun or shade. A much better working condition."

Higher production
In 2019 Vereijken started to use the new greenhouse with the Harmony summer screen. Comparing with the yields in their other greenhouses is difficult, as they grow different varieties. Nevertheless, Vereijken is very satisfied with the results.

"Especially during the first hot period, the crop did very well. We saw a beautiful, more vital plant, and a better setting. That should lead to higher production at a later stage. And according to the cultivation advisors, there was no other nursery where plants were as good as ours".

Only on the hottest days - three days around 40 degrees with no wind - Vereijken applied a 20 percent chink. This means that the second screen with which the new greenhouse is equipped, with a height difference of about 40 centimeters, was closed about 25 percent in the opposite direction. "That way, we created some extra space to let air through. But that only applies to extreme weather."

Habraken agrees that the combination of an Obscura blackout screen and a Harmony summer screen on top of each other makes that the grower is just that little bit more flexible.

"With new buildings, this can be achieved without too much extra cost. After all, you still need screens, profiles, and motors. In an existing greenhouse, the situation and space are decisive for the method of installation".

Guidance and knowledge sharing
The Harmony 1315 O FR has now also been used by growers in Germany and Belgium. Several Dutch tomato growers are orientating themselves to follow the example of Vereijken Nurseries. "Given the risks involved, we normally do not like to be the first to use something new," says Vereijken. "But in this case, we saw this as the best solution."

From the beginning, intensive collaboration between Vereijken and Svensson was the starting point. Habraken: "We had experience with growers in southern countries and with similar types of summer screen in horticulture. With this, we embarked on an advisory process with intensive guidance". Knowledge sharing between both parties is central, with as much data as possible being collected. "The feeling is good, but you also have to be able to substantiate it," says Vereijken.