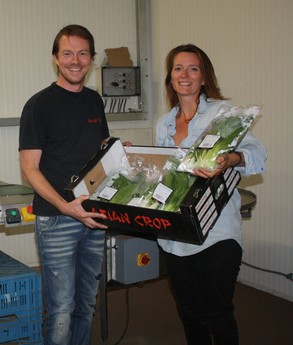 While pak choi can be found in every average supermarket, the consumer has to go to Asian supermarkets or stores for other Asian leafy crops.

Photo: Cees with his sister Daniëlle

Cees Visser, Asian Crop: "The customers of Asian convenience stores are changing. More and more people in the Netherlands are coming to these stores. On the one hand, this might be because particularly the younger generation travels a lot. They are visiting Thailand or Vietnam and get acquainted with the local kitchen, which they also imitate at home. Often, it is simple, quick dishes containing lots of vegetables.

You also see an increase in cooking clubs which makes people start looking for special ingredients. In the Asian store, they can find fresh product and good advice. You are assisted in person and the staff usually knows what is in store and which ingredients you can combine to create a tasteful dish." 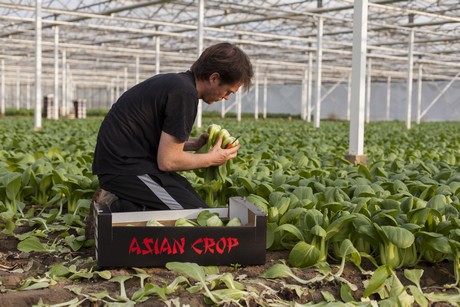 Pioneering
Asian Crop, located in Velden, Limburg, is growing Asian vegetables for domestic and international trade. The cultivation started small. In 1999, Leo, the father of Cees, started with some Asian leafy crops in a small corner of his radish greenhouse.Cees, smiling: "He got the idea during his trip to Thailand and Vietnam. He thought it would be nice to start working with these crops. In the beginning, he went to the Westland in a small Seat to find buyers twice a week. It took some pioneering without the internet."

500 gram
"We started with Shanghai Pak Choi, which has become common now. It makes sales more difficult, because the price is increasingly under pressure. It is important to supply a constant quality. A variation on the pak choi is the mini shanghai pak choi, which is packaged per 500 gram, making it ideal for two person dishes."

A lot of products are leaving Velden in 500 gram packaging. "Asian stores are getting more professional in that regard. It used to be supplied in high quantities and packaged in the store. We are doing that now." Characteristic for the Asian leafy crops is that nothing is cut. "The products are used in various kitchens and each has its own application. Take China as example, it is so big, every region has its own preparation. While some steam the Shanghai Pak Choi, it is cut for stir-frying by others."

Export
Since 2008, Asian Crop exports directly to the surrounding countries. "We also trade in exotics, so we can supply our customer with a complete package. In this way, we are no longer dependent on some large buyers, but can we supply to more customers. More than ever, we have to work hard to keep the customers returning. We have to make sure we can always supply. The customer wants it tomorrow if he calls today, and if possible, even with track-and-trace, so he knows when the pallet will arrive. It is not easy to meet all the requirements, but it is a challenge worth it. A satisfied customer doesn't have to look elsewhere."

Also from De Kwakel, where Van Veen Asia is located, Asian vegetables are exported, for example to Ireland and England. Jimmy van Veen: "It is grown over there, but there is no constant production." Still, the company has a domestic focus.

A look inside the greenhouse at Van Veen Asia

Bulk
Although the family company itself has a much longer history, it exists, in the current form with cultivation and trade in Asian vegetables, since 2005. They supply to wholesalers, Asian supermarkets and Asian stores. "We supply in boxes of six to eight kilo. There is a market for prepackaged product, but that requires labor and investment, and you also have to guarantee freshness. We are not there yet. As soon as we supply the vegetables to the stores and the supermarkets, it is packaged there."

Import during the winter months
When he was eighteen, Jimmy rolled into the family company which was founded by his father Jan and his brother Bert. They are growing in a greenhouse of 2.5 hectare and rent an additional piece. In the summer, the greenhouse is full with kai choi, mini pak choi. choisam, and shanghai pak choi. From March to November, we supply from our own garden. In the winter months, we import product from Spain."

More flexible
Jim: "The market has changed. You used have regular customers you could count upon. Now, partly because of internet, the market has become much more fluctuating. Although those regular customers have decreased, they know we supply vegetables year round. We used to always deliver on Tuesdays and Fridays, now we deliver every day. It can also take some guts to price a little bit sharper."