Jan Olsthoorn jr. (Force Demolition) winks to father and focuses on the future

"Back in greenhouse demolition, it's time to bring out the big guns again"

It has been a point of recognition for years in Poeldijk: the very recognizable logo on top of the old auction building. Save for the letters JO in the ring, there was no text, but everybody knew the logo belonged to the greenhouse demolishing activities of Jan Olsthoorn sr. That logo disappeared, but since last year the logo pops up again wherever demolishing takes place, thanks to Jan's son Jan jr,. who is returning to demolishing greenhouses with Force Demolition.

"I have been active in demolishing greenhouses my entire working life. In 2015, I founded Force Demolition, and we started in the renovation demolishing. A combination of market demand and love for the business caused us to become active again in the greenhouse demolition since January 1, 2018."

Growing with new equipment
Jan Jr. continues: "In the renovation branch of our company, we, as a matter of speaking, could work with a crow bar, carpet scraper, and a demolition hammer. Now we are back to demolishing greenhouses, it is time to bring out the big guns again, such as shovels, tractors, keepers, and elevated work platforms, which are essential when demolishing greenhouses. The conclusion was that we simply need more and larger equipment when demolishing greenhouses. This resulted in our request to Weterings Mechanisatie to develop two new skyhoppers which meet the demands of the market and our vision of the future. We are happy with the addition of new shovels last year, and now two new skyhoppers."

Force has a clear image of where to go. "A part thereof is not just to keep on investing in rolling material such as a truck with a crane and new machines, but also make sure our people are working with the best material." 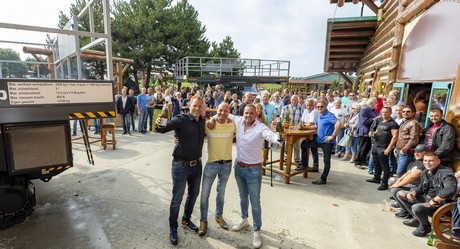 Jan, Elco, and Ron with skyhoppers. Jan jr.: "We are ready for the future, and every day our people demonstrate that smart demolishing is in our DNA."

New board members
When returning to demolishing greenhouses, Jan also asked two former colleagues to help make Force Demolition a success. Ron van der Helm and Elco van der Meer have been added to the board of directors of Force since January 1, 2018. Elco is responsible for the renovation demolition, while Ron monitors the greenhouse demolishing. Jan keeps track of the overall picture and is responsible for, among other things, sales and purchases."

Life's work of the grower stops
With regard to a number of years ago, Jan notices that there are relatively many business cessations in the greenhouse horticulture. "What we are doing, is always a bit sour. We are breaking down the life's work of the grower, a greenhouse which has provided sustenance for multiple families for years. We demolish with respect and the understanding that it is an emotional moment, but with complete conviction. We believe it is a great business and it is a challenge to break down a greenhouse as good and neatly as possible." 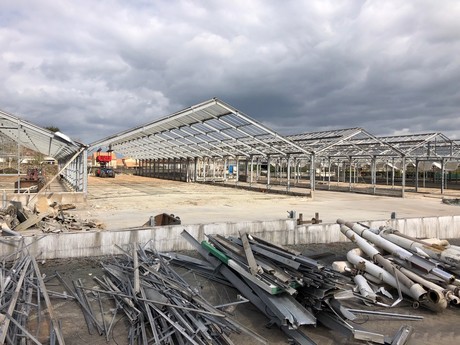 Demolishing abroad
Many relations, both domestically and abroad, have reestablished contact with the greenhouse demolisher when they heard the company was back in business. "In the Netherlands, you see there is a high demand for new houses, and that greenhouses have to make way. But also in France we recently had a grower who had to abandon his greenhouse for the same reasons. The village had been been up around his greenhouse through the years, and now the greenhouse had to make way. That was mostly an emotional event and caused many tears. The grower not only saw his life's work being demolished, but had also recently lost his father, with whom he had worked in the garden for years.

At Force, we are sensitive to these moments, and do not just brush them aside. A greenhouse horticulture company is not something for a few years, it is a life's work, sometimes spanning multiple generation. After finishing, we received a beautiful message of the grower and Ron still maintains a good contact with the man."