"At least 80% organic matter and full disintegration in 25 years"

New substrate based on brown coal

Substrates come in many shapes and sizes - there's mineral wool, perlite, peat, coco coir... and soon perhaps brown coal, at least as far as Paweł Mietlicki is concerned. His company, CarboHort, developed a new type of substrate based on brown coal. The invention, developed in collaboration with Prof. Stanisław Kaniszewski and Dr. Jacek Dyśko from the Polish Institute of Horticulture in Skierniewice, was recently awarded with a patent certificate.

The substrate, specifically developed for growing in greenhouses and tunnels, contains at least 80% organic matter, and reaches full disintegration in 25 years, according to Paweł. 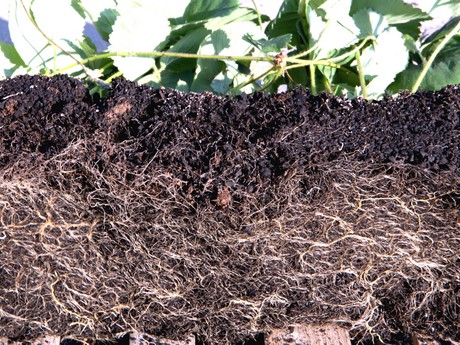 Micro- and macroelements
"Thanks to the substrate’s organic properties, and the considerate amount of micro- and macroelements it contains (zinc, boron, phosphorus, calcium, potassium), the substrate becomes an excellent carrier of mineral compounds that influence the whole vegetative process," Paweł explains. "This results in higher and better yields with much richer mineral or even taste content. The substrate also ensures earlier cropping and a prolonged cultivation period, thanks to the possibility of proper plant nutrition."

He strongly emphasises not to link his product to other high caloric brown coal or regular black / anthracite coal, which normally contains higher amount of heavy metals. "Our brown coal is soft, special, mined only 5-6 m below ground, and dedicated in particular for plant cultivation, so the amount of heavy metals is on a minimum level, almost non-existent."

Brown coal
He mentions studies that showed how organic substances contained in brown coal (humic, fulwic, hymatomelanic acids, humins, bitumins, celulose, lignine, etc.), combined with water and minerals creates a perfect environment for soilless cultivation of plants. "Brown coal as a source of humic substances not only improves the fertility of soils, but also the minerals uptake by plants and it’s the most durable organic material known so far for field and glasshouse crops." 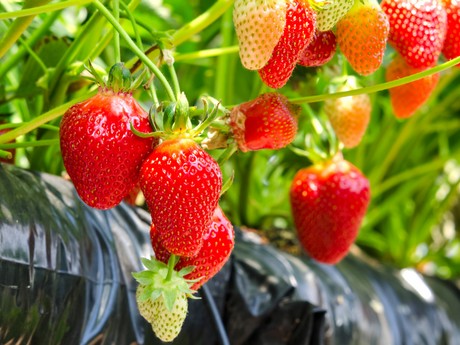 Growdena F1 tomatoes
One study in which the effects of brown coal-based substrate were shown, looked at Growdena F1 tomatoes in a glasshouse cultivation. Seeds were planted in the middle of February and cultivated in a prolonged cycle until the end of November. The first observation was that the smaller the granulates, the lower the pH value. More fragmented granulation resulted in a higher presence of active coal and extraction of salt. The granulation of brown coal was also found to improve the water properties of the substrate, and substrates with brown coal had a higher air capacity in comparison to other combinations or mineral wool. 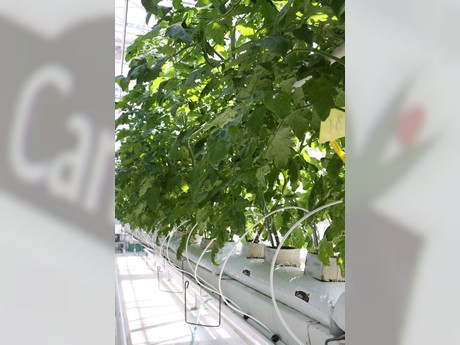 No alkalization
Unlike other organic substrates, brown coal did not cause alkalization of the fertilizer solution in the rhizosphere, according to Paweł. "Increased pH in the root system causes distortion in acquiring certain nutrients, especially phosphorus and microelements. Alkalization of nourishment dedicated to tomato fertigation was noted in the rhizospere during cultivation on substrates such as coco mats, cereal straw, wood fiber, and scobs. And then we noticed the element selenium for the first time since many years."

Brown coal substrate considerably affected the yield of greenhouse tomato type Growdena F1. The highest yield was achieved in a brown coal fraction with a fraction diameter of 2.5 mm, and the lowest on an earthy fraction. "Very high class fruits were collected, exceeding the class of tomatoes grown on a mineral wool and other organic substrates used so far", Paweł says. "They were especially fleshy and solid, containing much more dry mass, proteins, simple sugars, fiber, magnesium and with impeccable inside and outside coloration." 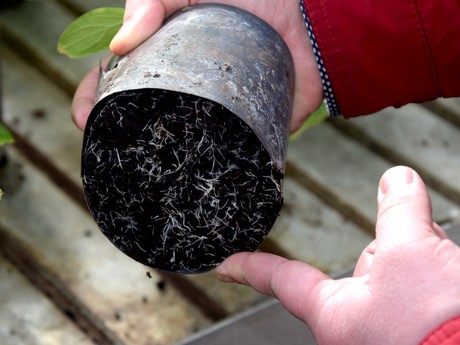 Cucumbers
Another experiment Paweł points to was conducted in a research facility in central France in 2016, with cucumbers growing on brown coal Carbomat mats.

"During cultivation in both cases (mineral wool and brown coal) proper plant growth was observed. The plants were healthy. In the beginning of August the leaves of plants grown on mineral wool mats showed signs of leaf chlorosis. In case of brown coal plants the coloration of fruits was more green, lush in comparison to those from mineral mats. Also better root placement was noted in brown coal mats. The brown coal substrate moisture was a bit lower, but the overall water distribution seemed more equal than in mineral wool mats." In June 2017 the 4th conductive year and the 8th cucumber cycle was initiated on the very same mats. 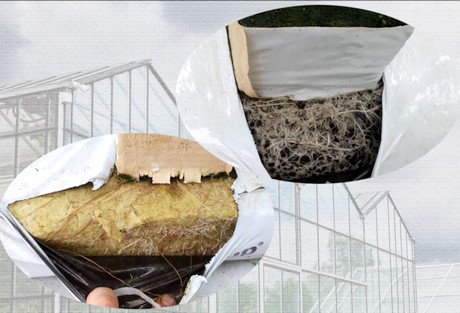 Comparison of root system in the Carbohort mats and in rockwool substrate from a Carbohort client. 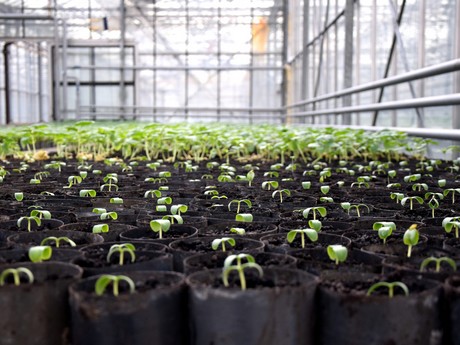 Versatility
Apart from the above examples, Paweł says his brown coal substrate has many other applications. "With equal success it can be re-used for cultivation, or after a finished production cycle, as a sole substrate or mixed with other substrates, and also for other types of plants such as ornamental plants, other fruits and vegetables, pot plants, lawns, nurseries etc. Furthermore the used invented substrate can be used in agriculture, for example to discard it on a field and plow, in order to improve the quality of soils." 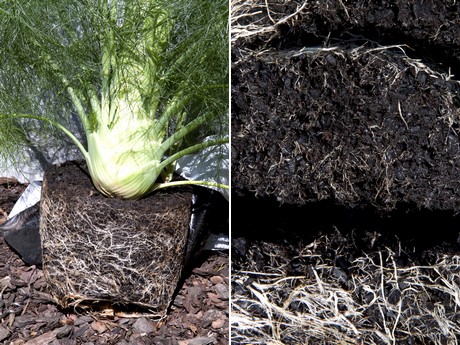