What is the cost of vertical farming?

How can vertical farming contribute to (inter)national food production? This question is more complex than it initially seems. The answer does not only depend on the production, but also on the costs for water, energy and CO2. The Greenhouse Horticulture Business Unit of Wageningen University & Research and TU Delft are investigating the feasibility of this new production system.

Take a head of lettuce for example: how much does it cost to produce one? The answer is fairly well known when it comes to cultivation in greenhouses in the Netherlands. Greenhouse models and growth models can be used to predict the production at a certain consumption of water, energy and CO2. Those models are not suitable, however, for cultivation in a vertical farm. The combination of high-density crop production and a closed construction necessitates a different approach with respect to heat, cooling and dehumidification.

The key question when comparing both cultivation systems is: how much energy does a vertical farm need? The required amount of water and CO2 can be reduced compared to a 'traditional' greenhouse, but this is not the case for the cooling and dehumidification demand. The high internal heat load and the lack of natural ventilation ensure a high cooling demand, which consequently results in residual heat. 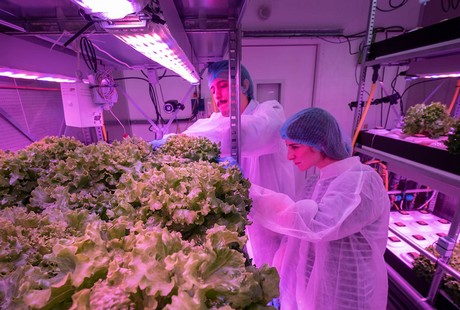