The good thing about greenhouses is that they allow you to grow food practically at any location. Also in Fort Ware, one of the most remote communities in Canada's westernmost province of British Columbia. For this reason, the Kwadacha First Nation Indian Band's chief Donny van Somer is working on a greenhouse project to produce locally grown and healthy food.

The remote community of Fort Ware has a small population of less than 300 inhabitants which are dependent on produce that is being trucked in over a 400 km gravel road. "The village is only accessible by this gravel road or by plane, so the vegetables that come in are often bruised and incredibly expensive", said Shaye Donald, who is responsible for the management planning and construction of the Kwadacha's First Nation greenhouse project. 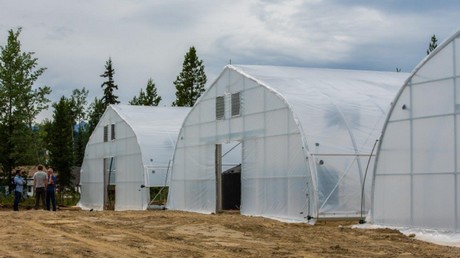 The three greenhouses in Fort Ware (Picture by kaskadenacouncil.com)

Donald explained that the greenhouse project is a result of the ambition of the Nation's chief Donny van Somer. He said that "Donny has inspiring vision to make the community more sustainable while improving the health of the members."

For the past few months Donald is working on the three greenhouses. They will be the solution to provide the local citizens a healthy and better quality alternative to the incredibly expensive trucked in vegetables. "The hope is that the three greenhouses can bring down the cost of these foods for the community as well as the neighboring village, Tsay Keh Dene."

Due to the sometimes extreme climatic conditions in Fort Ware, the greenhouses are double insulated polyethylene houses, each 40'X90' (12m X 27.5m approximately). They are manufactured by BW Global, who, because of the northern latitude, will install theur "thermax" diffused light polyethylene covers on the structures.

The Kwadacha First Nation is also seeking to build a small biomass co-gen facility that would burn wood waste from a sawmill on the reserve, and produce around 145 kilowatts of electricity for the community and heat for the greenhouse. Until that is in place the greenhouses will be using propane forced air heaters.

Fort Ware is very remote; it can only be reached via a 400 km gravel road or by plane, landing on a tiny airstrip.

The greenhouses will be used to grow hydroponic tomatoes, peppers, cucumbers, lettuce and other herbs and leafy greens. One of the greenhouses is going to use a NFT growing system, while the other two will be equipped with drip irrigation systems.

"We are slated to have our first plants come up on August 22", said Donald. "As our first season is going to be short, we had Houweling's Tomatoes propagate our vine crops for us. The hope in the long run is to be growing everything on site with our own propagation. Hopefully we will be able to to so."