As a grower, you care for your crops by providing them with all they need: light, nutrients, water, and the right growing conditions. Ironically, the system you are using to provide your plants with water and nutrients may also double as a vehicle for unwanted guests in the form of pathogens such as Pythium, Phytophthora, and other fungi and bacteria, which can damage crops and raise food safety concerns. This host of organisms is usually present in irrigation water in small amounts but tends to proliferate in the water system in the form of biofilm. Biofilm is not only a hotbed for pathogen infestation, but it also has a strong negative impact on irrigation uniformity as it blocks emitters. The effects of non-uniform irrigation are well known to growers, as plants receive uneven amounts of water and fertilizer, which leads to stress in the plants that receive less water. As a result, yields will be lower, and non-uniform growth leads to strong variances in time-to-market across the crop – both of these factors have a negative impact on profitability.

Biofilm as a breeding ground
Ideally, you would use 100 percent clean water in your cultivation, but unfortunately, that's not realistic. You may get your water from a well, from a wastewater treatment plant, or by reusing irrigation water. That water probably contains a small quantity of microorganisms like bacteria and algae spores. When those come into contact with the inside of your irrigation system, biofilm will accumulate.

This occurs in four stages:

That biofilm is a fertile breeding ground for pathogens and can lead to blockages in the irrigation system, so you'll want to prevent biofilm from forming in the first place or remove it if it's already present. Not doing so is often very costly in terms of lost production, as well as in treatments for plant disease which fail to resolve the root cause of the problem.

But how can biofilm be addressed? The table below compares some solutions for preventing and removing biofilm.

Solutions such as ozone or UV are not effective with biofilm, as they only have a local effect that does not extend along the irrigation lines. Nanobubbles, in turn, have a very limited impact on the organics that form the biofilm and struggle to achieve the required level of biofilm control:

An effective way to prevent the buildup of biofilm is by using oxidizers such as chlorine or hydrogen peroxide. Chlorine, while effective against biofilm, is not a good solution as it could also damage drippers. In addition, chlorine leaves behind disinfection byproducts after use which remains in the water or soil, negatively affecting the plants.

Studies on hydrogen peroxide have shown its effectiveness in combating biofilm and preventing clogging of the irrigation system while having the added benefit of oxygenating the water. Once dosed into the irrigation system, hydrogen peroxide will dissolve very well in water. As soon as it contacts any organics, it will oxidize them. This will slowly erode biofilm, and importantly it will prevent the formation of more biofilm. It is very common to see a gradient in concentration from the injection point down to the end of the irrigation lines, with the gradient being steeper the more organics a system has. After use, peroxide molecules will become water and oxygen.

However, industrial peroxide contains more than just peroxide, and accordingly, it has a few major drawbacks. At high concentrations, hydrogen peroxide is a hazardous substance and requires strict safety measures. It also comes with high levels of impurities, especially additives consisting of heavy metals and chelating agents used to minimize losses of hydrogen peroxide during transport and storage. These additives have a detrimental effect on the water and crop as they accumulate over time. Notably, these impurities are known to accumulate in the substrate and root zone of the plants, where they create a local area with high salinity. Not only does this impact osmotic pressure in the water in the vicinity of the root zone, which hampers fertilizer uptake, but it also blocks the water paths to the root zone. This means that despite using hydrogen peroxide, biofilm and pathogens still occur, and adding more peroxide only exacerbates the problem at plant level. Finally, users depend on an often volatile supply chain with uncertain availability and pricing.

Peroxide UltraPure: an effective weapon against biofilm
Peroxide UltraPure, produced by the HPGen system, circumvents these drawbacks by producing an ultra-pure form of hydrogen peroxide, Peroxide UltraPure, directly on-site. Produced at safe, low concentrations, directly at the point of use, no stabilizers are required. This makes it ideal for agricultural use, where purity is vital to achieving the full potential of hydrogen peroxide: having no stabilizers means peroxide has optimal reactivity, so it will be able to reach the full depth of the irrigation system, including substrate and plant root zone. These are kept free of biofilm, promoting a healthy uptake of water and nutrients that improve the health and vigor of the plants. The HPGen system also operates autonomously: hook up the system to your irrigation system, switch it on, and it will take care of the rest.

We've installed numerous HPGen systems generating peroxide UltraPure on-site, used in a variety of crops in different parts of the world, where irrigation water quality also varies greatly. Peroxide UltraPure has been shown time and again to be effective in combating biofilm, as evidenced by the examples below. 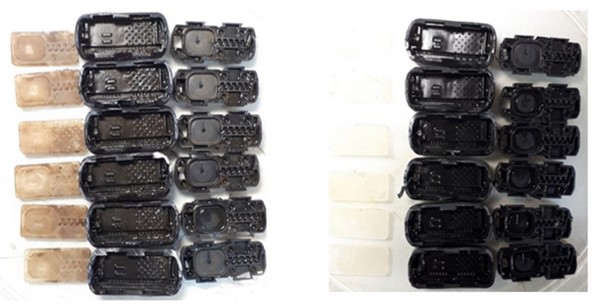 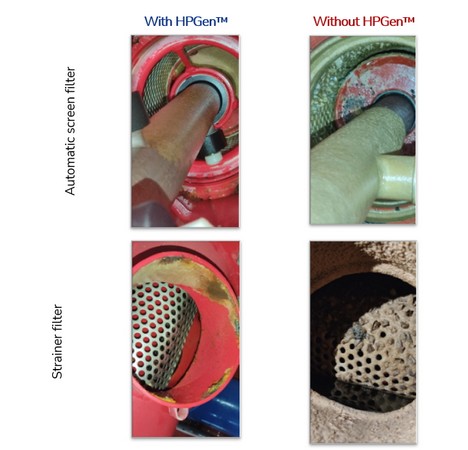 Spain's irrigation community, with irrigation water from an open canal with a heavy organic load. Filters and strainers in the section treated with HPGen Peroxide UltraPure look clean, while those without HPGen show significant growth of biofilm and even zebra mussels.

In field studies, Peroxide UltraPure has been shown to achieve very uniform irrigation in drip systems. In a controlled test on a 12-hectare organic blueberry plantation, about 30% of the drippers were found to flow below accepted values. Within a few weeks of starting the injection of Peroxide UltraPure, nearly all drippers were back to flowing water. This had a very positive effect on the crop, which grew more vigorously and healthily.

Blueberry plantation comparing side by side the effect of Peroxide UltraPure.

Based on very comprehensive studies and experience across the globe, we are able to recommend optimal dosing regimens, which are also backed by academic studies (e.g., the effectiveness of hydrogen peroxide treatments in preventing biofilm clogging in drip irrigation systems). This includes continuous dosing with recommended concentrations based on multiple parameters, including water quality, irrigation system, irrigation regime, crop, climate, and others.