Belgian lettuce growers ready for the future after a series of investments:

"You can't grow on water without lights"

Peter and Christel Verschaeren of Hydroponic recently installed a new CHP system. That means these Belgian growers are all set to grow a crop under lights this winter, having already invested in LED lighting. "We couldn't have switched to LED at a better time. We can achieve the same cultivation rate but with less light," begins Peter.

The 1.2-hectare greenhouse used to feature HPS fixtures. LED replaced those, 1-to-1 using the existing wiring. The move to water-cooled LED lighting means the lettuce growers' lights use less power. "Our electricity consumption has dropped from 265 kilowatt hours to 220 kilowatt hours. Our lettuces now have 67 micromoles illuminating them. Before, with the HPS, that was 38 micromoles." 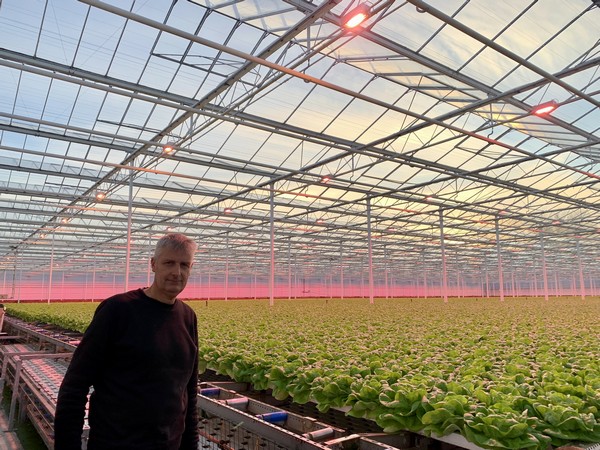 Peter in his lit greenhouse.

Far-red
The growers cultivate different lettuce varieties hydroponically in a mobile gutter system in their greenhouse. In early November, it still contains mostly head lettuce, but the switch to winter crops is made by mid-November. "In the summer, we grow five lanes of head lettuce and one of Lollo Bionda. In winter, we switch to one lane of head lettuce, two of Lollo Bionda, and one each of Lollo Rosso, red oak leaf, and green oak leaf lettuce," explains Peter.

They do not adjust the greenhouse's light spectrum per variety. "We do, however, do so at strategic points above the crop. Above two lanes, we added ten percent red to the spectrum over 35 meters and over four lanes over 25 meters. That's when the crop cycle begins, and it helps with leaf elongation. Especially head lettuce needs that." 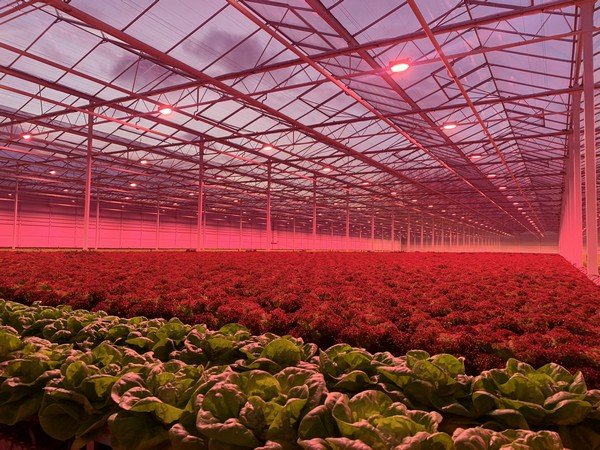 Extra white light
Far-red light, supplied by Oreon and installed by Indagro bvba, has been added to the new lights' spectrum. The Vegetable Growing Test Farm's Cultivation advisor Isabel Vandevelde has previously introduced the growers to LED. "We followed the trials done there in recent years. They learned a lot about the spectra, including far-red," says Peter.

Along with far-red, the growers have added some white light to the spectrum, too. "It usually naturally has five percent white light. We upped that to eight percent. That keeps our working environment pleasant. At the end of the growing cycle, when we process the lettuce, some fixtures have 20% white light." 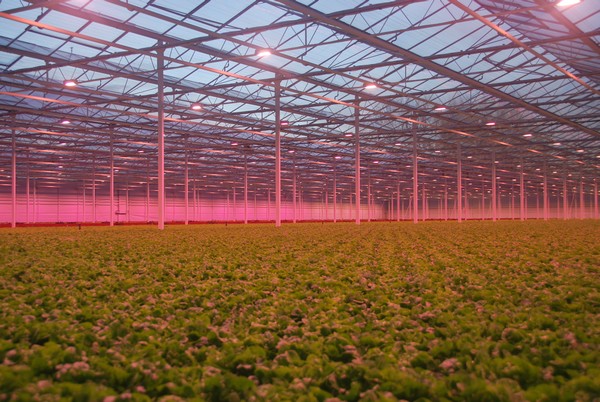 Nine hours of lighting
In early November, Hydroponic was still lighting carefully, given the high energy prices. "We don't have fixed gas yet, so pay daily prices. We're waiting for the first bill to see how we're doing." They light their crops nine hours a day - from 5 to 11 am and 4 to 7 pm. Even once they receive their gas bill, Peter does not think they will immediately begin using their lights much more often. "We plan to keep to this lighting regime," he says.

Power supply
Deciding to install the new CHP system led to the idea of investing in LED lighting. The current Flemish regulations and all the certificates the grower would have to get in the next decade quickly sealed the deal. "In early 2022, we decided to go for LED lighting. We also immediately installed a new facade and top screens and built a high-voltage box. We're now entirely ready for the future."

Though the growers already had one, the new CHP system has been up and running since mid-October. "The first one ran on palm oil and last winter on diesel. Palm oil became too expensive, and we could get diesel at a good price. The new one uses natural gas." Without the CHP unit, the growers could not use lighting in the past. "We couldn't use electricity from the grid for that," says Verschaeren. 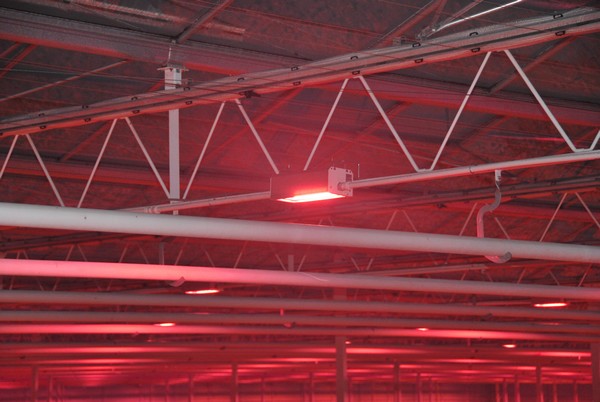 Water-cooled fixtures
The greenhouse's power infrastructure has since been improved. "We can now feed power back to the grid, but don't for now. We use all the power we generate. In time, though, we intend to use feed-in to reduce some of our high energy costs."

Hydroponic's LED fixtures are water-cooled. Oreon is betting on this method, which allows for some heat recovery. Peter points out that that aspect certainly factored into specifically choosing the 650 W Empress fixtures. "The heat's pumped down and reintroduced at the bottom of the greenhouse under the gutters via hoses. LED emits less radiant heat, but we can still bring in heat to activate the plants," he explains. 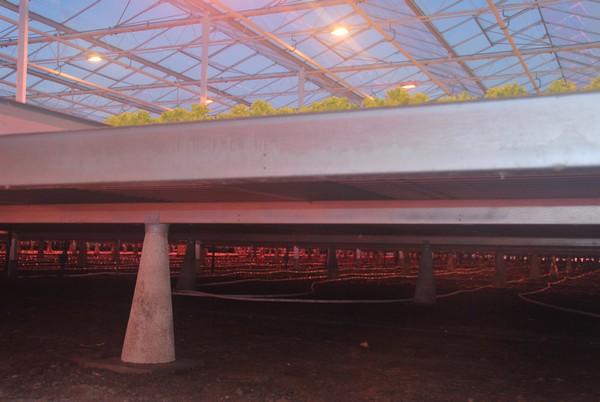 The water-cooled LED lights' heat is reintroduced under the gutters.

Improved quality
The lights were only recently hung in the greenhouse, and the switch to winter cultivation has yet to be made. Nonetheless, Peter believes he may already be seeing the effects on the crops. "I think I see fewer yellow leaves, which is normally a problem in the fall."

The growers want to improve their crops' quality with these LED lights. "Our lettuce grow without root balls, so their heads must be heavier to match lettuce with root balls' weight. With LED, I expect to grow stronger, more compact heads. Lollo rosso grows especially well under lights," adds Peter.

He also expects it to affect cultivation. "Edging is a big problem. The crops usually react quite strongly to HPS fixtures' radiant heat. LEDs have less of that, something I observed at the test farm too. You get bigger leaves and more disease-resistant lettuce." 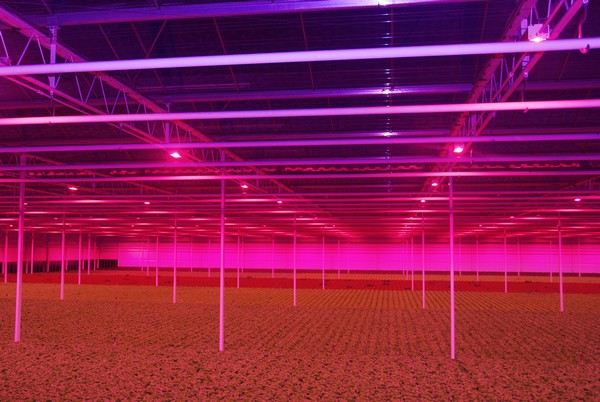 The growers use overhead heating too.

Hotter days
The LED fixtures' heat recovery system is a closed one within the greenhouse. Peter knows similar projects usually exchange heat using buffer tanks. "Our heat goes straight from the fixtures to under the gutters. That's simpler for us. We use our buffer tank for overhead heating."

Switching from HPS to LED means the growers will use more heat for cultivation. "We have to get the same effect as growing with HPS. Our 24-hour temperature has climbed about 1 to 1.5°C. With HPS, we were at 8°C degrees at night and 12 during the day. Now, that reaches 9°C overnight and 13 to 13.5 in the day," Peter concludes.