Last year (2021), Addy Breugem, head grower at Thanet Earth Tomatoes, replaced half of the tomato crops’ original SON-T (HPS [high-pressure sodium] lights with LED lights. His motivation for switching to LED lights was to save energy – reducing Thanet Earth’s energy usage and becoming less reliant on the capricious energy market. However, he soon realized that growing with LEDs is a different ball game from growing with SON-T lights. Hopefully, the addition of Svensson’s LUXOUS 1147 FR climate screens will help solve the problem.

Once the 24 hectares of LEDs were installed, Addy became aware that the tomato plants were not thriving under their new lighting regime as he had hoped. Last spring, some of the tomato fruits were weak and splitting, and the leaves were deficient in nutrients such as calcium and boron. He explains that LED lights emit less heat radiation than HPS lights – whose warmth is traditionally used to heat up the heads (or tops) of tomato plants. Without this additional heat, the plants – when the black-out sheets opened in the morning – were losing radiating heat towards the cold glasshouse roof and
became colder than their surrounding area.

Lower plant temperatures compared to the warmer air temperature stops the plants’ evaporation and create condensation on the plants’ parts, which causes plant diseases. Addy explains: “The humidity levels were so high at the plants’ stomatas that the plants were not evaporating. When this happens, the plants are unable to properly take up nutrients, and they become nutrient deficient. The risk of diseases developing also increases.”

Addy explains that to avoid this phenomenon, growers can do one of two things: they can add more heat to the glasshouse via pipe heat, or they can utilize the existing heat by installing a second screen. ”We decided that the best option was the installation of a second screen,” he says. Svensson’s OBSCURA 9950 FR W screens were already installed in the glasshouse to reduce light emissions. After consulting with project manager Martin van Zeijl, senior sales manager for BOM Group – the main contractor for the task, Svensson’s LUXOUS 1147 FR climate screen was chosen for the new job.

Martin explains: “When it came to supplying the screens, Ludvig Svensson was the obvious choice. They are the best company for the job. We have been involved in screen development since the 1970s and together have introduced a number of innovations.” Martin points out that the LUXOUS 1147 FR climate screen provides a “double function” – reducing energy usage while creating the right climate for the crop.

He says: “We chose the LUXOUS 1147 FR because it features the ‘clearest cloth’ you can find to enable good heat retention with maximum light transmission.” While Addy acknowledges the need to save energy, he asserts that: “The most important thing for me is to create a good environment for growing the crops.” The BOM Group team has been working with experienced screen installation specialist SCRE3NS (both of which are part of the Atrium Agri collaboration) to install the screens. Together they have designed a special new layer of wire onto which the new climate screens are being fitted. This layer sits in between the lamp fixtures and the OBSCURA screen at the top of the glasshouse. 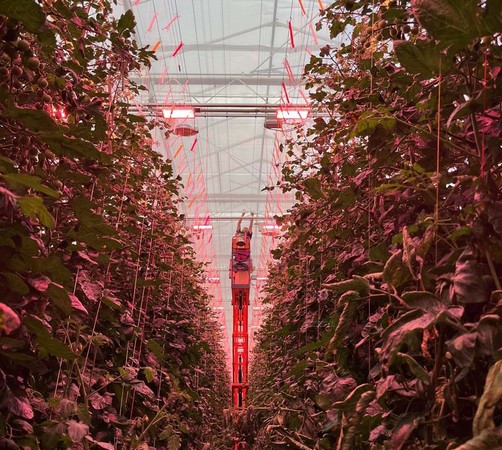 SCRE3NS’ Pascal den Heijer says: “The greenhouse itself was not set up for a second screen, so we had to make a special design. But the system that we’ve created has worked out very well.” The installation project began in September (2022), and two blocks (totaling 14 hectares) are due to be completed by the end of November (2022). Preparations for the third block are already underway, and work on this is due to start in the New Year. Everyone is feeling confident about the project – which will ensure that Thanet Earth’s renowned winter crop of tomatoes are this season produced in ideal growing conditions. As Martin says: “Hopefully, for everybody involved in producing the crop, the winter will be smooth.”