Hutchinsons agronomist Jonathan Blackman has been awarded the prestigious and internationally-recognized Order of the Hop in recognition of his services to the sector for almost 30 years.

The distinguished award dates back to medieval times and biannually honors individuals from countries belonging to the International Hop Growers Convention who have contributed to the development and prosperity of hop production in their country.

Dr. Blackman, who is the Horticultural Technical Manager at Hutchinsons, advising hop growers in Worcestershire and Herefordshire, was presented with the ‘Chevalier’ award at the 58th Congress of the International Hop Growers´ Convention in Prague on 28 July.

The Chevalier award is one of three ranks in the Order of the Hop, all of which recognize significant achievement within the industry.

“It was an honor to be nominated and accepted for this award,” Dr. Blackman said. “I’ve been involved with the industry professionally for the best part of 30 years, but having come from a hop-growing family in Kent, I’ve been around hops all of my life.”

Dr. Blackman began his career at ADAS Rosemaund in 1994, where he ran hop research for five years, before moving to Dalgety and then Hutchinsons, where he has been supporting local hop growers with agronomy advice for more than 20 years. In that time, he has also acted as secretary to his local Herefordshire Hop Discussion Group.

Past chairman Stephen Wright of The Hop Plant Company nominated Dr. Blackman for the award.

“Like many hop growers, I feel that Jonathan has gone above and beyond for the hop industry over the years. He has carried out secretarial duties for over twenty years, organizing speakers, farm walks, and meetings." 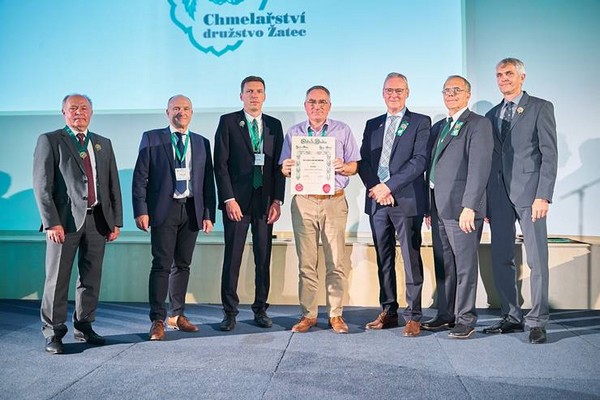 “All the chairmen that have served with Jonathan, including myself, have had life made incredibly easy with all the preparation work having been done before. I do believe that if it was not for Jonathan, the group would not exist and it would be a huge detriment to the industry.”

Changing industry
Dr. Blackman, who has been a member of the Institute of Brewing and Distilling for 25 years this year, recognized there had been a considerable rationalization of the UK hop industry over the past 20-30 years but was confident there would be opportunities for those that remained.

“When I started at Rosemaund, there was just over 3,000 ha of hops grown in the UK, now we’re down to less than 700 ha and around 40 growers in the whole country. It has been a difficult time for growers, especially through the pandemic, but there is a future for those that can tough it out.”

He said the sector needed improved prices and contracts that gave growers the confidence to invest and adapt to new trends though. For example, many new beers are American-style pale ales and use US-grown hops, rather than traditional varieties grown in the UK, which has historically supplied the cask beer market.

Breeding programs
“The industry has invested a lot in plant breeding, and there is a UK-based program to find varieties that the market wants and hopefully replace some of the imported US hops in the future.”

Alongside Dr. Blackman’s position at Hutchinsons, where he supports agronomy colleagues, he also represents Hutchinsons on the AIC Commercial Horticulture Group, and independently, he is a Trustee of the Marden Fruit Show Society and a member of the Expert Committee on Pesticide Residues in Food. Furthermore, he continues to work to address other challenges around pest and disease control with an increasingly limited armory.

He is currently a crop protection advisor to the British Hop Association, helping to secure as many crop protection solutions for UK growers as possible through applications for off-label Extension of Authorisation for Minor Use (EAMU) approval. He has also instigated an Innovative Farmers project looking at integrated solutions to controlling two-spotted spider mites.

Hutchinsons director, Mike Hutchinson concluded: “It is fantastic that the hop industry has chosen to honor Jonathan in this way. He has shown extraordinary commitment to hops and the wider horticultural industry for nearly 30 years. This is a great recognition of all the time, effort, and expertise that Jonathan has devoted to the industry.”