"We've built a truly solid box over the years”

"A little better every year" is the goal of every manufacturer, including Aquamar. This Dutch company has been building its Pro-Vida nanobubble generators using the same principle for years. Maarten Kramer explains the importance of oxygen-rich water.

"Oxygen has long been under-appreciated in horticulture," he says. "However, growers are becoming increasingly aware of how important water quality is for their plants."

Here, the credo is, 'not too little, but also not too much.' "If your oxygen level is too low, the biofilm grows much faster, and the bacterial pressure increases. Some experts say too high an oxygen level can also lead to phenomena in the plant. Though, opinions are divided on this," Maarten explains. Several factors - time, heat, organic pollution, and biofilm - can decrease oxygen levels.

Aquamar, thus, recommends a specific oxygen level. "About 20-35 mg/L in the day basin or mixing tanks, depending on the situation. And a range between 18 and 25 mg in the greenhouse." 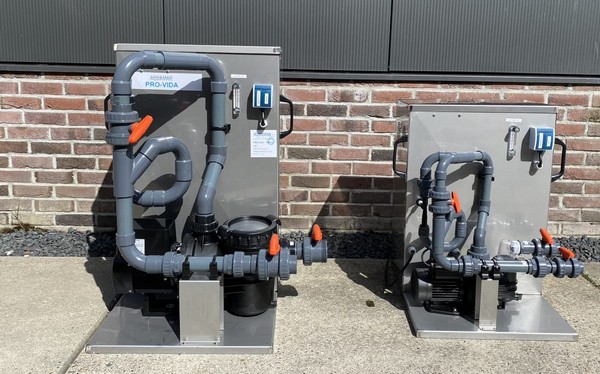 Solid box
"It began with a box to which we keep adding new products, such as using different materials and improved equipment connection," Maarten says. The goal is to extend the Pro-Vida unit's life span as much as possible. "We've built a truly solid box over the years." It now has more energy-efficient pumps attached to it, from 380V on the larger models to 230V on the smaller ones.

Maintenance
Aquamar's offer of annual maintenance also helps extend the unit's life span. Maarten explains why that is necessary: "The unit's oxygen generator separates nitrogen from oxygen. At a certain point, it becomes saturated. Then the generator has to be overhauled to provide 100% oxygen again."

Meter
The company is hard at work on another improvement - the oxygen meter. Growers must be able to see what the oxygen content in the basin water is at a glance. The idea is that growers and Aquamar will be able to see that data in real-time.

"We also want to be able to store that information for several months. Then you can see the different oxygen levels on hot and cold days and display that in a curve diagram."

That will reduce the Pro-Vida's maintenance needs even more. A screen on the unit that will immediately show the water's oxygen level is still under development. "We currently mainly use separate oxygen meters that store data. The advantage is that you can easily measure oxygen levels in various places in the greenhouse," Kramer continues.

Inhouse production
According to Maarten, another advantage is that Aquamar builds the Pro-Vida in-house. "We control the production, so we can easily modify it on-site."

That is evident in the range of models Aquamar offers. "We have seven different models with capacity ranges of 2m3/h to 54m3/h. Sometimes, if it's more convenient for the customer, we place several units. The oxygen generators also differ," Maarten says. "The small one unit generates five liters of oxygen per minute, the large one, 20 liters, with several steps in between."

So, it is calculated which unit will suit each grower. That depends on the greenhouse size and what kind of crops it contains. "Cucumbers and tomatoes need a lot of water, and the flow rate is much higher. The water then stands still in the pipe for much less time. The greenhouse is also an important factor: one grower may have five km of pipe, another ten, even though they both have four hectares. Every greenhouse is different," Maarten concludes.