Man eats three Carolina Reaper chilies in 8.7 sec like it's nothing

Gregory Foster (USA) has achieved a scorching new record for the fastest time to eat three Carolina Reaper chilies, chomping them down in just 8.72 seconds in San Diego, California, USA. The chili fan attempted the record as a personal challenge to see how far he could push himself and his love for the Carolina Reaper pepper.

The attempt took place on Saturday, 11 December 2021, at the Seaport Shopping Center in Downtown San Diego. Many passers-by stopped to watch the attempt. The independent witnesses required for this attempt were locals who were randomly approached and asked to participate. Incredibly, Gregory ended up consuming six Carolina Reaper chilies that day, as he completed two attempts in quick succession. The first attempt was disqualified as there was pepper matter in his mouth that had not been swallowed by the conclusion of the attempt. He was also unsuccessful in beating the then-current record of 9.72 seconds, held by Mike Jack (Canada). 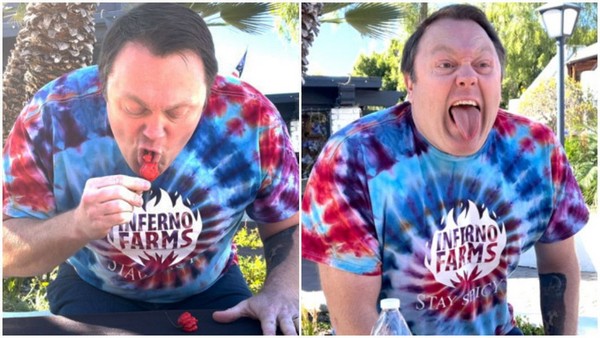 Because of this, Gregory decided to go straight ahead and attempt the record again. Gregory prepared for this attempt by living and eating as he usually does, with "tons of hot sauce and lots of super-hot chili peppers." He said this attempt was more about mastering his chewing technique rather than his tolerance for the peppers. Gregory also holds the record for the most Carolina Reaper chilies eaten in one minute – 120g in case you were wondering – which has stood for over five years. "Professionally, I spent nearly 30 years working in restaurants developing my flavor awareness," said Gregory. "I've always loved spicy food and have constantly tried to push my tolerance to the limit."

In addition to enjoying the flavor of these flaming chilies, Gregory is also interested in them from a horticultural perspective. "I have been a gardener since childhood with a deep fascination for and love of Capsicums. Currently, I own a hot sauce company, Inferno Farms, which allows me to live my passion for chilies in every way."