Ever since the research by Rosalind Franklin, Francis Crick, James Watson, and Maurice Wilkins, which led to the unraveling of the helix structure of DNA in the fifties of the last century, many were intrigued by the astonishing biology and biochemistry around DNA. It has inspired and still inspires many scientists and breeders, like at KeyGene, to develop innovative technologies that boost the development of new crops, feed the growing world population, and deal with things like global warming and new pests and diseases.

DNA is not only the basis of most life forms as we know them, it is also the basis for innovations in our crops. It has been so since humans switched from hunter-gatherers to farmers. At first, farmers and breeders selected the best performing plants visually, to collect seeds for the next crop. They did so without knowing that they were actually selecting plants having new combinations of alleles (gene versions), or plants with new small changes in the DNA, what we now call mutations. 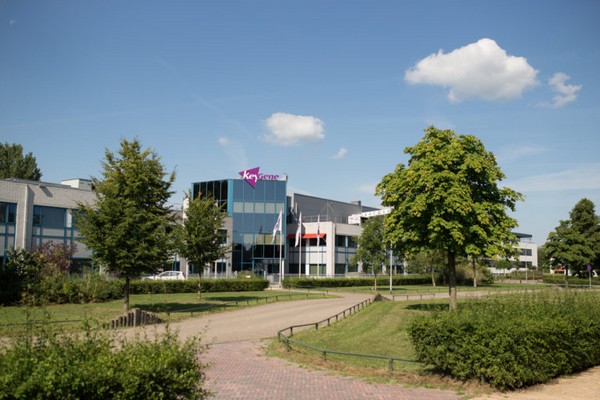 Understanding, selecting, and directing
One could say that our understanding of the functioning of the plants’ DNA can still be improved. We understand much more than twenty years ago. We also know that there is a lot more to understand. This better understanding will enable scientists to develop innovations for faster variety selection and for inducing variation in the DNA that will better direct the breeding process.

A better understanding of DNA
During every cell division in e.g. an onion plant, some 16.000.000.000 DNA building blocks (four different nucleotides; A, C, G, and T), are all to be copied in a correct way. Even a mistake of 1 nucleotide can cause a change in a plant trait or even lethal change. Chemical modifications attached to the DNA add another layer of complexity that can influence the total of a plant’s traits also called the phenotype.

After every cell division, both newly formed plant cells will need to successfully use the genetic information. The way the information is used still holds a lot of mysteries. Luckily aspects of it are constantly being unraveled through scientific discoveries.

On top of the increasing knowledge of the functioning of DNA, we have seen an exponential growth of the availability of crops’ genome sequences: the deciphering of the entire DNA represented by the chromosomes. For many crops, a so-called reference genome has been published during the past decade and many more will come.. With the current advances in long-read sequencing technologies, so-called Telomere-to-Telomere reference genomes can be generated. These boost the finding of useful genes and regulatory elements. New insights are gained from these genomic resources that can be of value for plant breeding.

Selection of desired plants made easier
Combining new genome sequences with new knowledge about the function and functioning of DNA often leads to exciting new possibilities for plant breeding. Selecting the best plants based on genetic information (e.g. by using genotyping technologies) becomes affordable and less time-consuming. Instead of visual inspection, breeders can then screen thousands of seedlings for the best combinations of desired alleles, even at the base-pair level. The DNA analysis powerfully predicts the actual traits of the fully grown plants. That empowers breeders to select the best seedlings for further analysis, thus saving time and diminishing the space needed to grow the plants.

Directing new variations in DNA
In nature, the continuous development of new versions of genes occurs by small changes in the DNA sequence of genes, called mutations. The survival of the fittest determines which new gene variants will disappear and which will remain in the population. When a mutation leads to a more successful plant, this plant will get more offspring than others, and the new version of the gene will establish in the population of the plant. When a gene causes a less successful plant, the plant will get fewer offspring and the new version will slowly disappear from the species. This is what we call evolution and natural selection.

Thanks to our knowledge about the structure, function, and functioning of genes, we can now benefit from directed evolution. We can understand/discover what new versions of a gene could be beneficial for the plant. For that, we can use computer models and algorithms (i.e deep learning & artificial intelligence), in which the impact is simulated for thousands of hypothetical changes on the level of DNA blocks, enabling us to further speed up the finding of better performing versions of genes. This way, we can for instance find new gene variants that will make the plant more resistant to plant disease or better coping with changes in the climate.

The next step is to grow thousands of plants that are stimulated to develop new small changes in the DNA and find the plants that have the induced gene changes which are thought to be beneficial. These plants can then be selected for further research and breeding.

DNA at the heart of technology innovation for plant breeding
At KeyGene, DNA is at the heart of our technology innovations for crop improvement. It started out with the invention of the DNA fingerprinting technology Amplified Fragment Length Polymorphism (AFLP) in 1990. The AFLP technology has been used in science & business all over the world, in plants, animals, and for medical research. At that moment, the detection of the DNA was fragment-based. This was later transferred into sequence-based detection of variation in DNA (Genotyping-By-Sequencing also known as SBG and GBS). This technology is now widely used within the scientific community and in business. DNA sequences of crops are now commonly used in many aspects of research and still perform an important role in technology innovation for crop improvement. On top of that, innovative technologies for inducing the desired variation in DNA are developed.

A wealth to come
Some say we are only at the beginning of exploring the possibilities that the DNA of crops encompasses for the well-being of mankind. They may well be right. It is exciting to already see and use the possibilities to e.g. breed for plants that can better deal with climate change, new plant diseases, or produce more and better proteins. A world of innovations is ahead, all thanks to what we now know as DNA.