Tropical spinach production for leaf and grain in New Jersey

Tropical spinach (Amaranthus spp.) is an important leafy vegetable in Africa and Asia, a minor grain crop in the United States, and a major grain crop in Latin America. The rich nutritional and health values of the leaf and grain as well as its potential as a complement to the regular spinach (“temperate spinach” Spinacia oleracea) during the hot summer months when the latter cannot be grown in the field in New Jersey (NJ), make tropical spinach an attractive vegetable option for the grower and consumer in NJ and the Mid-Atlantic. Also, the influx of ethnic nationalities from Africa, Asia, and Latin America into the Mid-Atlantic is an additional incentive for the grower to explore the growing market opportunities.

Between 2016 and 2018 studies were conducted in the greenhouse and field at Rutgers University, New Brunswick, NJ, to compare 22 tropical spinach selections (17 African/American types; 5 Asian types) sourced from the US and international seed markets for suitability for leaf and/or grain production. In the greenhouse tropical spinach was raised under 16/8 hr light/dark regime (high pressure sodium light), 75-85oF temperature and 75-85% relative humidity for 16 weeks. In the field, tropical spinach was either direct seeded or transplanted into a sandy loam soil (pH 6.5-6.8, 1.8-2.1% organic matter) using nursey raised seedlings. Field sowing or transplanting was done on raised seedbeds under black plastic mulch with drip irrigation to supplement natural rainfall. Both in the field and greenhouse, 20-20-20 NPK fertilizer was applied based on soil test results and recommendation for greenhouse potting mix. 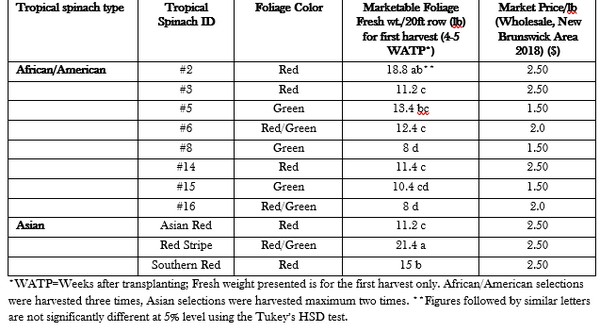