Piet Wijnen is the cultivation manager of various strawberry greenhouse sites of Dutch nursery Thwan of Gennip BV. At two sites, he uses a Ridder (formerly HortiMaX) climate computer and Growficient substrate sensors to monitor and optimize irrigation. Close collaboration between these two technology developers and the strawberry grower has ensured that this process is becoming increasingly efficient, advanced, and data-driven.

Smart interface
Growficient and Ridder have helped create an interface that ensures that the data from the Growficient irrigation and substrate sensors can be used to directly influence the irrigation strategy. The Growficient sensors are linked to the Ridder climate computer using the open Ridder HortOS platform. As a result, the data from the sensors is not only shown by the climate computer but can also be used to further automate irrigation. This can be done based on upper and lower limit values set for, for example, the decreasing moisture content of the substrate or by triggers from the Growficient platform. In addition, the sensor information from Growficient can be visualized and viewed in dashboard applications within the Ridder HortOS platform. 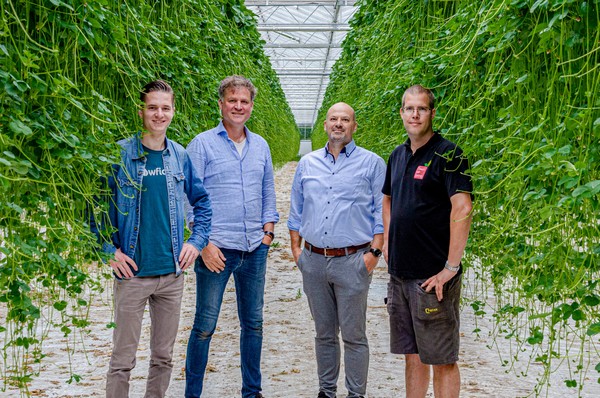 ‘Determining the right irrigation volume is quite challenging’
“Normally, we determine our irrigation strategy by analyzing the data retrospectively. In the morning I'll check to see how it went the day before, and whether I stopped irrigation on time. I need to ensure that the root zone of the plants isn't too wet going into the night. The drainage channels provide the required information for this but adjusting the irrigation settings is always done manually. Determining the right irrigation volume is often quite challenging, especially for inexperienced growers,” grower Piet Wijnen says.

To optimize their strategy, Piet and his colleagues often check the data on the climate computer. In addition, Piet also uses the Growficient substrate sensors to quantify his adjustments based on educated guesswork. These sensors help him, for example, to determine the correct times to start and stop irrigation. “You can start irrigation in the morning if the substrate has dried out sufficiently.’’ He also adjusts the irrigation cycles when it is sunny, based on the sensor measurements: ‘’When it's very hot, I can see on the Growficient dashboard that the temperature inside the growing substrate is rising. I will then increase the frequency of the irrigation cycles, but reduce the water volume per cycle, to keep the temperature low.’’

Needs
The partnership between Ridder and Growficient will make irrigation scheduling easier for Piet and his fellow growers. The measured dry-back of the substrate and other relevant sensor data will soon be instantly visible on the climate computer. “I can use these measured values for a setting that triggers irrigation automatically at a specific lower limit. To do this, the average measurement of the sensors must be fed into the computer. This is also ideal for cultivation using supplemental lighting, because at night I cannot make manual adjustments. It is great that the computer does this automatically based on the measurements." In addition to the new insights and a more data-driven strategy that Piet is able to extract from the sensor data, it also makes his job easier. ‘’Making growing easier is important. This technology helps us do that and it saves us time.”

“The interface with Ridder HortOS means that it is now possible to display our sensor measurements on the climate computer in addition to the Growficient dashboard. However, the second step is to automate irrigation using limit value settings thanks to the interface with the climate computer. Ultimately, the goal is for the plant feedback to become the input for managing the greenhouse (autonomous growing and irrigation),” says Tim Engelman from Growficient.

This ‘listening’ to the plants using sensors is what Growficient and Ridder are focusing on in their collaboration. And this is not only important for irrigation, but also for other aspects of the greenhouse climate. As Piet Wijnen also says: ‘’I hope that we will eventually be able to get as many parties together as possible that will work collaboratively in order to ultimately be able to offer an all-in-one solution that will make growers’ lives easier.''