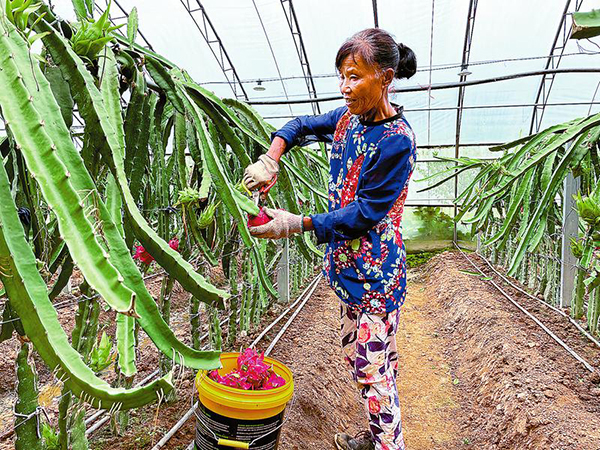 In the Limin Farmers Professional Cooperative in the Wanwan Community, Northwest China, workers were weighing and packing the newly picked pitaya. In the pitaya greenhouse, brightly colored, huge and fresh pitaya fruits are all over the branches. August is the fruit-bearing period for the pitaya of the Limin Farmers Professional Cooperative. There are countless merchants ordering dragon fruit from this production base every day.

"This variety is called 'Red Crystal', one fruit is about 300g-350g, the flesh is soft, sweet and juicy." Li Gang explains, as she enthusiastically peeled a pitaya fruit. The deep red flesh is crystal clear and sweet, and the aftertaste is refreshing. The red pitaya is just one of the many fruits here. The entire cooperative covers an area of ​​10 hectares. It mainly produces tomatoes, cucumbers, eggplants, peppers, and other off-season vegetables and pitaya, strawberries, cherry tomatoes, plums, melons, and other various fruits.

57-year-old Li Gang is a native of Danfeng County. In 2009, Li Gang was attracted by the government's policy of encouraging returning to the hometown to start a business, and the idea of ​developing modern agriculture in his hometown was planted. After some inspections, Li Gang decided to start the business, building 49 vegetable greenhouses on 10 hectares of land in the village to grow tomatoes, green peppers, eggplants, cucumbers, and other vegetables. He invited technicians from Shouguang City, and followed the steps of planting seedlings, raising seedlings, and applying fertilizer. He actively participated in various training carried out by the local County Agriculture Bureau. 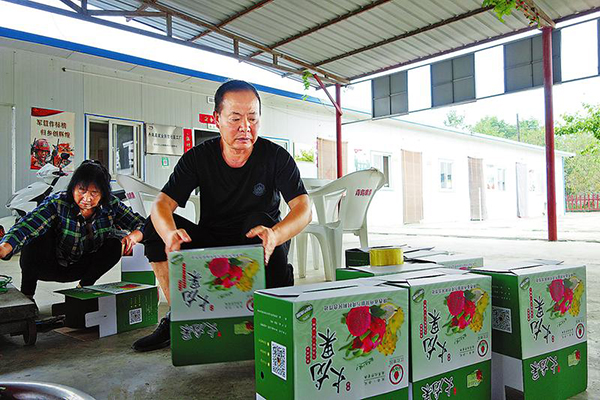 Vegetable cooperative
At the beginning of 2011, Li Gang registered and established the Limin Vegetable Cooperative in Wanwan Village, Danfeng County, which is mainly engaged in vegetable planting and sales, developing 50 members, and motivating the surrounding people to get involved together. Just when everything was getting better, a blizzard in the winter of that year caused him a direct economic loss of more than 200,000 RMB. With the encouragement of his family, Li Gang returned back to the starting point. From 2012 to 2014, under his efforts, the cooperative operated with many difficulties. In the downturn of his career, Li Gang kept learning and thinking. He believes, on the way to study agriculture, he should not only learn the knowledge of agricultural planting but also study the market to see what kind of agricultural products meet the needs of the market and are suitable for the development direction of modern agriculture.

Pitaya
In 2019, Li Gang selected 6 varieties of pitaya to develop in 10 greenhouses and interplanted strawberries under the pitaya trees. After two years of development, this year has entered a fruitful period, and economic benefits continue to improve.

Now, Li Gang’s trial-planted rare pitaya "thornless yellow dragon" has entered the fruit-bearing period and is expected to mature next month. "This is a new variety of pitaya. In some large cities, high-end fruit supermarkets are very popular with consumers, and the price is about 40 RMB per kg." Li Gang hopes to continue to develop some such high-end products to fill the gap in the market and improve the market competitiveness of his cooperative.