Located in the greenhouse area in the Almeria region in southern Spain, a greenhouse grower with cucumbers in winter and watermelons in summer ran into some irrigation issues: the soil in the region is dry, the climate warm and the operators use organic fertilizers. The plants are grown in the typical Almeria sandy soil (enarenado) and are irrigated with a modern drip irrigation system using pressure compensating non-leakage drippers. 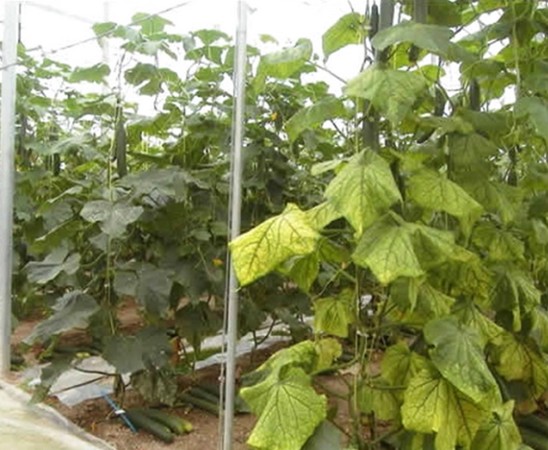 When HPNow’s precision irrigation and agronomy experts assessed the site, it was clear that clogging of drippers leads to non-uniform irrigation and insufficient water and fertilizer delivery to part of the crop. To mitigate this, farm personnel were going through the drippers frequently to “unclog”, a manual process highly costly in man-hours.

Organic matter
Soil quality was also analyzed and the amount of organic matter in the soil, a critical parameter for the healthy growth of the plants, was very low at 0.33%. This is due to the poor dissolution of organic matter fertilizers in water, which further exacerbates dripper clogging and decreases crop productivity. To overcome these issues, an HPGen system was installed and integrated with the drip irrigation system. The HPGen was installed in the irrigation room and set to automatically fill a buffer tank with Peroxide UltraPure. Dosing was done through a proportional dosing pump, which is both simple and effective.

Improved yields
After a season of cucumber crop with HPGen, yields were compared to previous seasons. The results with HPGen were of 17 kg/m2, a record for this grower, substantially higher than the average for the past 5 years of 12 kg/m2. In addition, the grower observed the quality of the fruit improved, and the fruit could remain on the plant longer, allowing for optimization in harvesting depending on market prices.

The improvement in >40% in production is explained by two factors:

· Better irrigation uniformity: After two weeks of installing the HPGen all drippers showed a uniform water flow, which allows for an optimal distribution of water and fertilizer throughout the field.

· Increase of soil organic content, which increased by a factor of 10 (from 0.33 to 4 %), which contributed to improving plant nutrition.

Both factors are due to the high oxidizing power of the Peroxide UltraPure generated by the HPGen system, which oxidizes organic matter in the irrigation system and makes it available to the crop. This results in better health and vigor of the plants, and in an improvement in yields. 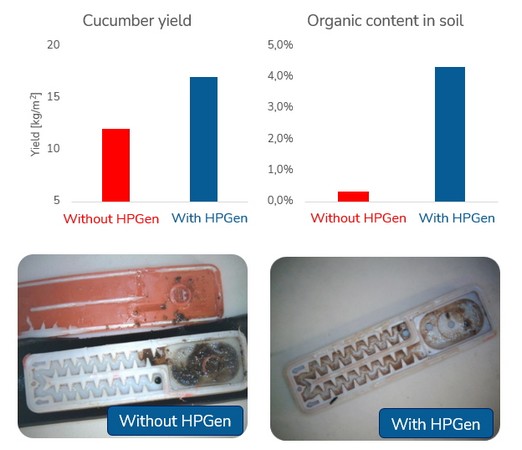