Bacterial speck disease, which reduces both fruit yield and quality, has been a growing problem in tomatoes over the last five years. Because the culpable bacterium prefers a cool and wet climate, crops in places such as New York State have been particularly susceptible. 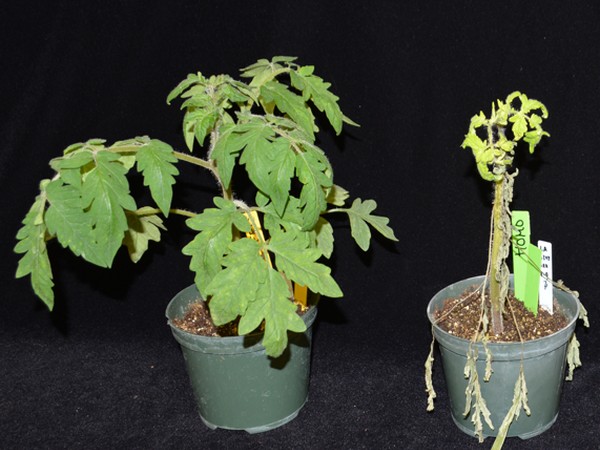 A tomato plant with the newly discovered Ptr1 gene (left) is resistant to the race 1 strain of bacterial speck disease, while a tomato plant without the gene (right) is susceptible. Image credit: Greg Martin.

Recent research at the Boyce Thompson Institute headed by postgraduates Carolina Mazo-Molina and Samantha Mainiero and overseen by faculty member Greg Martin may change this. Published in the August issue of The Plant Journal, their work has uncovered the first known gene to impart resistance to a particular strain, called 'race 1', of the bacterium causing speck disease.

Another resistance gene, Pto, which provides resistance to race 0 strains of Pseudomonas syringae, has been used for over 25 years. However, crops remain vulnerable to the increasingly common race 1 strain, resulting in significant losses for growers.

With the discovery of this new gene, which the researchers have dubbed Pseudomonas tomato race 1 (Ptr1), damage caused by bacterial speck disease may soon become a thing of the past.

“We are working with plant breeders now to introduce the Ptr1 gene into tomato varieties that already have Pto,” explains Martin, who is also a professor at Cornell University’s School of Integrative Plant Science. “If you do that, then you will have resistance to all known bacteria that cause speck disease.”

Natural selection and serendipity
The project started in 2015, after a chance outbreak of bacterial speck disease at one of Cornell’s research farms, where BTI faculty member Jim Giovannoni was researching tomato fruit quality. Giovannoni is also a USDA scientist and an Adjunct Professor in Cornell’s School of Integrative Plant Science.

“Speck disease wiped out their entire trial except for two plants,” explains Martin. “Both of those plants turned out to have the Ptr1 resistance gene. This was a remarkable coincidence of natural selection and serendipity.”

The two plants that survived both contained a gene derived from Solanum lycopersicoides, a wild relative of the cultivated tomato. By collecting seeds of the plants and studying their inheritance patterns, the team determined that a single region on one chromosome is responsible for conferring resistance, work that was published in Molecular Plant-Microbe Interactions in 2019. In this most recent paper, they have identified a specific gene in this region that confers race 1 resistance, the Ptr1 gene. 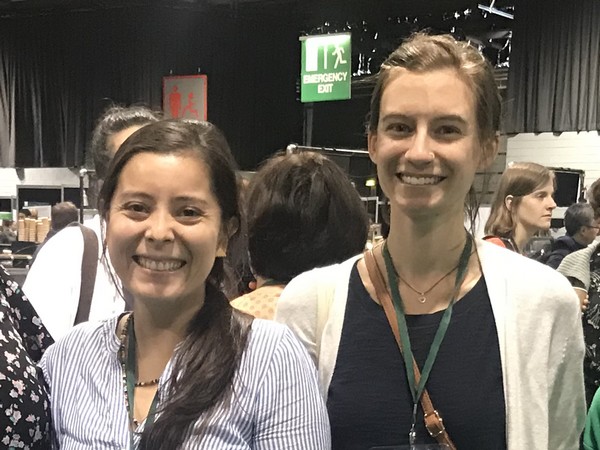 Mazo-Molina described the thrill of identifying the gene. “When we found Ptr1, I would always say it ‘might be the gene’ or ‘could be the gene,’” she explains. “But at some point, I was able to tell myself, ‘This is the gene. You don’t have to doubt it.’”

Ptr1 codes for a protein that indirectly detects the presence of a pathogenic protein called AvrRpt2. Both apple and the popular model plant Arabidopsis have genes that encode proteins that also recognize the same bacterial protein.

“The three proteins are completely different,” says Martin. “There’s no similarity at all. It looks like an example of convergent evolution, independent solutions in different plants to the same problem.”

Next steps
Now that the gene has been identified, the team is focused on developing tomato varieties that carry the Ptr1 gene. “The wild species in which Ptr1 is naturally found is really difficult to cross with cultivated tomatoes,” explains Mainiero. “We can’t just use traditional breeding methods.”

Thankfully, there may be another way. “A defective form of the gene is present in many tomato varieties already,” says Martin, “with natural mutations having made it nonfunctional. There is a new type of gene editing technology called CRISPR Prime Editing that might allow us to go in and repair this defective gene.”

Mainiero plans to work on the CRISPR Prime Editing project, and Mazo-Molina will focus on understanding the molecular mechanism of action underlying Ptr1.

Martin emphasizes that the collaboration between the Mainiero and Mazo-Molina was key to the project’s success. “It is a great example of a collaboration within a lab between two different lab members,” he says. “They worked seamlessly as a team.”