Carlos Esteve, of Onubafruit: "We expect our raspberry production to grow by 25%"

"This week, we are exporting the first strawberries from Huelva"

Onubafruit's strawberry harvests in Salamanca came to an end in mid-November, and since late November, the firm has been harvesting the first strawberries from Huelva. So far, they have been supplying mainly the domestic market with limited quantities. As the volumes available begin to increase this week, exports to the European Union will also start. 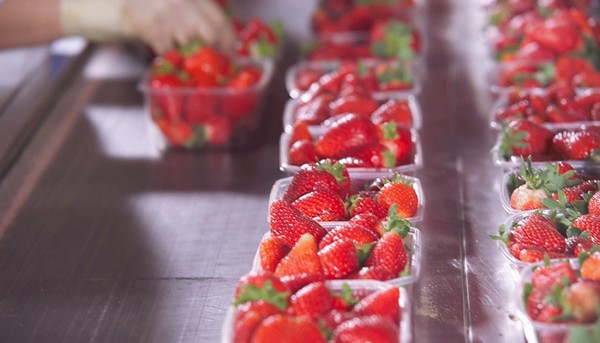 "This year, we have started the strawberry campaign in Huelva a little earlier than usual, as we have planted more in pots," says Carlos Esteve, commercial director of Onubafruit. “We have been distributing the fruit in the domestic market since the start. We also compete with other origins, such as the Netherlands, Belgium, Peru or Morocco.”

"This week, we will start with the first exports, and we'll also be competing with Egypt, although we have the feeling that European importers lose their interest in Egyptian strawberries as soon as Spanish ones become available."

The second degree cooperative expects to slightly increase its strawberry production this year. “We expect somewhat larger volumes, although, in general, it seems that the strawberry acreage in Huelva will remain stable, as there is increasingly less land available. The restrictions to obtain irrigation water and the lack of pickers are also limiting the growth of the strawberry acreage. The point is that in addition to overlapping with other crops, the strawberry harvest entails greater difficulties. The lack of pickers is a growing problem not only in Huelva, but globally,” says Carlos Esteve.

85% of the strawberries grown by Onubafruit are either Fortuna or Rociera, of the FNM program. As for raspberries, it works with exclusive varieties through agreements with breeders, and it has its own blueberry varieties. Soon it will also launch its own strawberry variety program.

"Our raspberry production will grow by 20-25% this campaign"

Meanwhile, the blueberry and raspberry productions continue to grow in Huelva, although in the case of blueberries, the expansion of the acreage has slowed down considerably.

“In September, we started the new 2019/2020 raspberry campaign, having already sold some 2,000 tons. The raspberry production is growing not only in Huelva, but also in Morocco and Portugal. At least, this appears to be the case right now, given how great the raspberry supply is at the moment, when there have usually been shortages in previous years. Sales are relatively smooth, but prices have been falling due to the greater supply,” says Carlos Esteve.