"A number of vertical farms will disappear, but the sector as a whole will expand"

Leafing through newspaper reports, you'd think that vertical farming is either the perfect solution to global hunger, or a completely failed agriculture system. As with many things, the truth isn't quite as extreme as that. Michele Butturini, researcher at WUR, who together with Leo Marcelis wrote the chapter “Vertical farming in Europe: present status and outlook” for the new Kozai book Plant Factory, can attest to this.

"We believe that vertical farming producers should focus on higher market segments and that products should be marketed as premium products. There is every reason to do that: lowest water footprint, low food miles, longer shelf life, higher land use efficiency, fresher products and potentially higher food safety."

"Vertical farming, being so novel, is almost an unknown market (except for Japan and some other Asian countries)", Michele says. "Furthermore, it is an industry that makes intense use of technology. The element of 'mystery', due to its novelty, combined with the intense use of technology, can raise enthusiasm but also a lot of skepticism and confusion." Not all consumers may like products not grown in the field or in soil: in the end, it is a personal choice. "However, what is important is that there is an open and honest debate about pros and cons of vertical farming. We believe that a successful vertical farm is able to connect with their consumers, to build a relationship of trust with the customers. Companies themselves should get the consumers involved by making them aware of the pros but also of the cons, namely that vertical farms are not (yet?) perfectly sustainable as they make intense use of electric energy."

And what about the people in the company? "Understanding the growth prospects of a vertical farming company is a hard task, and oftentimes mistakes can be made", Michele says. "Corporate officers should not forget to listen to their employees, those that take care of the daily operation and improvements, so that they can build reasonable promises of growth."

Sky High
While it is important to get the word out on the benefits of vertical farming, it all starts with the cultivation itself, of course. That's why the Sky High research program, led by Professor Leo Marcelis of Wageningen University, will study the optimization of the shoot and root environment of plants, to improve growth and energy use efficiency of plant production in vertical farms. Besides optimizing growth they will study in detail how the growth conditions can be used to substantially improve product quality (taste, aroma, appearance, shelf life, nutritional value, safety). This will also include the study of genetic regulation. Furthermore the climate control will be optimized and algorithms will be developed to optimize the design operation of vertical farms. 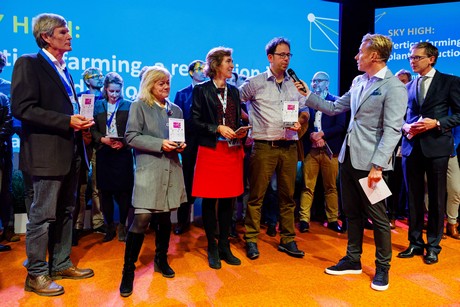 Sky High was awarded a €5 million grant, as was announced at the NWO congress. Here, Sander van Delden represents Leo and the Horticulture and Product Physiology department at WUR.

Michele has also been involved with the 2nd edition of the Urban Greenhouse Challenge, supporting Rio Pals and Marta Eggers in the early stage of the preparation, advising them on vertical farming, trying to answer their questions, and helping them present the challenge to potential partners. "Once I had to present the challenge to the senior management of the Chinese Northwest A&F University, that was very cool", he says.

Vertical future
Looking forward, Michele and Leo believe that initially only a relatively number of crops are likely to be economically profitable, and gradually more crops will follow.

"A large number of vertical farms will start", they say. "This will include established companies as well as small start-ups, large scale as well as small scale. Despite the fact that quite a number of them will disappear again within a few years, the sector as a whole will expand worldwide. As it is a new production system there are still many opportunities for improving the systems and that is what will occur."

For more information on the Sky High project, see the NWO website. Leo and Michele also contributed a chapter to the second edition of the book Plant Factory.