Rooftop greenhouses. You either love them or hate them. If you're in the second camp, you may want to think again. Xavier Durany of the University of Barcelona knows all about the positive results that can be achieved by integrating a rooftop greenhouse in a building, and he recently presented those at Wageningen University & Research, as part of a series of lectures in connection with the Urban Greenhouse Challenge, in collaboration with the GROOF project.

With a team featuring members from a range of disciplines, including law, engineering, architecture, agronomy, sociology, business, and energy engineering, the Fertilecity project, funded by the Spanish government, unites researchers from the University of Barcelona and the Polytechnic University of Catalonia. In the Fertilecity greenhouse, a wide range of crops are grown, with cultivation experiments being undertaken with beans, tomatoes, chard, and lettuce. 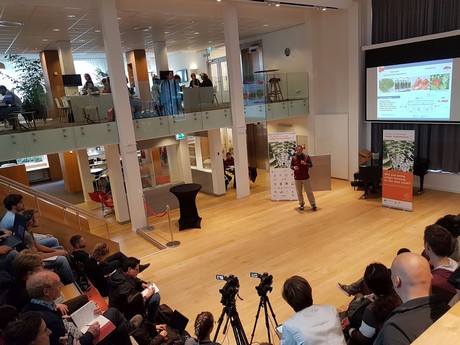 Water
"The main resource the crops need is water, so all the water that we are using comes from rainwater." Being located 25 kilometers from Barcelona, the greenhouse normally gets 500 liters of rainwater per square meter during the course of a year.

The Fertilecity system features two rainwater tanks: one for the services that the building itself requires, and one for the crops growing in the greenhouse and the ornamental plants that adorn the building. In what Xavier calls a symbiotic relationship with the neighborhood, the neighboring Eureka building also supplies the rainwater collected there to the rooftop greenhouse.

He mentions that chemical contamination in rainwater is low, lower than that of river water used to provide drinking water to the city of Barcelona. Biological contamination may be a problem, but that's an issue that's easily solved through disinfection, for instance by using ultraviolet light or chlorine.

Crop protection
One of the limitations of having a rooftop greenhouse is weight - it can't be too heavy. For the Fertilecity team, that concern led them to using soilless systems, growing the crops on a perlite substrate. The greenhouse itself is passive, with windows that open or close according to the outside conditions.

Because the rooftop greenhouse uses a soilless system, it cannot be considered organic according to European rules. Nevertheless, the team uses biological crop protection as much as possible, Xavier says. That said, it's impossible to keep out all pests in such an environment that's connected to the outside air, and where people may actually introduce pests into the greenhouse: "If you have a greenhouse on a rooftop in your city, that's the way people will work, because it's not a 'professional' greenhouse." 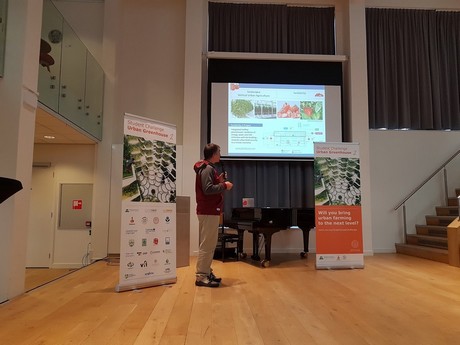 Profitability
It's all well and good to close loops and become more sustainable, but if the flow of money stops, everything else does too. That's why Fertilecity also looks at the market situation. For instance, one of the experimental crops grown in the greenhouse is beans. Xavier emphasizes that in determining in which season to grow them, the market is an important factor. "We want not only to have sustainable food, but also economically sustainable food."

Research at the Mercabarna market in Barcelona has shown that prices for beans are high in October and November, so the rooftop greenhouse team focuses their bean production around that period.

Market demand also played a part in deciding what tomato variety to grow. The choice was made to cultivate coeur de boeuf tomatoes, because those are more highly appreciated by local consumers, and thus yield a higher price. 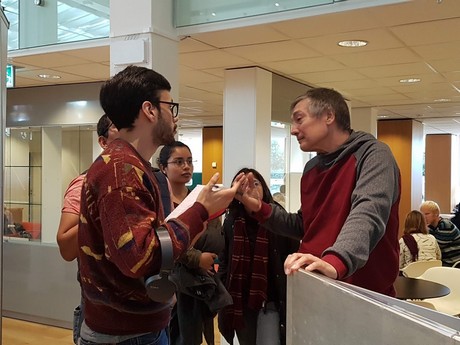 After the presentation, students had the opportunity to ask Xavier questions.

The optimum system
Ultimately, any experiment is of course about the results, and Fertilecity is still an experiment. As part of the research, Xavier and his team analyzed how the crops have been doing in the past few years. For being operational during such a short time, some of the results are already quite impressive. In tomatoes, for instance, the harvest hit 20 kilos per square meter in 2017.

The main question the researchers want to answer though, is which is the most efficient year-round combination of crops for minimum environmental impact in a rooftop greenhouse. In the optimal distribution scenario, the team was able to lower the amount of CO2 emitted per € earned by the rooftop greenhouse, from 0.84 kg to 0.71 kg. In that scenario, tomatoes are grown from January to August, and this is combined with two shorter crop cycles of lettuce and beans.

"So it's not just about the way we integrate our greenhouse with the building. We also look at improving sustainability while obtaining economic profit."

For those of you who want all the details, Xavier's presentation is available for download here.