A troublesome pepper gutter that makes it impossible to drain from the side, cannot be replaced just like that. In order to still take steps with the oxygen content in the slab and thus prevent root problems during the course of the cultivation, Personal Vision chose to work with an aeration system. "An hour before the first irrigation, the Oxybull ensures that the oxygen level in the drain silo is up to standard again," says cultivation specialist Roel Klapwijk of the company that grows red bell peppers on 7 hectares in Bleiswijk, The Netherlands. 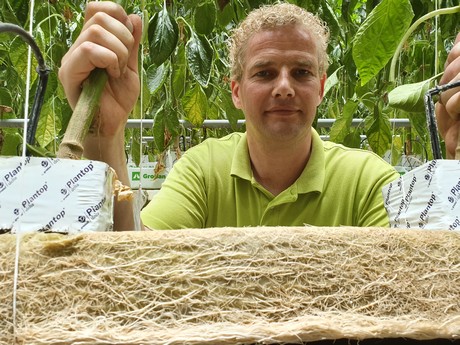 Last year at the beginning of the summer, the Oxybull, an aeration application from Agrona, was installed in the drainage silo. Not because of acute problems, but to take a new step to improve the quality of the irrigation water. Just like fellow pepper grower Maikel van den Berg from Quality Peppers, who had previously purchased the aeration system. Both companies have been actively working together in the field of cultivation for two years. “The cooperation with Maikel van den Berg from Quality Peppers has certainly contributed to the fact that after years of struggling with a troublesome bell pepper gutter and increasing root problems, we have now also started with aerating the water in the drain silo, among other things. Because the water has to pass through the entire slab before it can drain into the drainage channels, the oxygen content in the slabs fell sharply, especially in the summer with rising temperatures, with root problems as a result.”

The oxygen level up to standard again for the first watering
After purchasing the Oxybull, Roel started measuring oxygen levels more frequently this year. Van Iperen also carried out a water quality measurement this season that confirmed his measurements. The results are positive for him. “Of course it is not the case that you suddenly see a substantial increase in the oxygen level in your drain silo, because with a water temperature of 25 degrees Celsius the saturation point is reached with 8 milligrams of oxygen per liter. But the oxygen level remains better."

To achieve that, the Oxybull runs daily from seven in the morning to seven in the evening during spring and summer. "Air is blown through a special membrane cloth, creating millions of miniscule bubbles," explains Nadir Laaguili of Agrona. The water is therefore of good quality for all 25-30 irrigations, a common number at Personal Vision on an average summer day with 25 degrees Celsius as outside temperature and 3000 joules of light irradiation "At the end of a day, the Oxybull will be stopped by the timer in the evening," Roel continues. “Running for 24 hours doesn't make sense because you don't irrigate at night, and the pump that controls the aeration plate also uses electricity. Moreover, the bearings also heat up considerably so that they can cool down nicely at night. "

Gradually implement improvements
It is especially during the summer months that the water quality is difficult to maintain for growers. As the water temperature, also in the rainwater basin, rises, it becomes more difficult to offer sufficient oxygen in the water for the crop. But the Oxybull also has a task in winter. “Shortly after planting you give, depending on irradiation and outside temperature, a maximum of one to two turns per day, often about three hours after sunrise. Because you do not get the pipes 'automatically' completely flushed, we first flush the pipes themselves prior to watering. Besides, we do this all year round.” 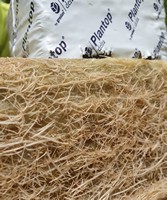 The use of the Oxybull is not the only thing that Roel is doing to prevent root problems, especially pythium plays a major role in his greenhouse. “To see the effect of the measures you take, you gradually implement improvements. For example, we have also been dripping chlorine dioxide for a number of years and I am currently testing alternating with stabilized hydrogen peroxide. The last product works, because it falls apart into hydrogen and oxygen when it comes into contact with dirt, I think even better than chlorine dioxide. I can see that in the whiter roots in the slabs."

In addition, Personal Vision replaced the drip lines at the start of the new growing season. These were already twelve years old. "All in all, the roots are now offered a constant oxygen level," says Roel. Oxygen that also promotes the growth of the right bacteria in the slab, Nadir adds. "As a result, the crop produces better roots, so that the crop can absorb nutrients better, resulting in a stronger, more resilient crop." Bio-stimulator AG STIM from Agrona can also help here. “At Quality Peppers, they already use this product that stimulates soil life, instead of hydrogen peroxide, with good root development and clean drip lines as result."