Closer to the consumer:

Are city farms a model for the future?

Like abandoned marquees, the three greenhouses marked "City Farm" stand among the trees. Through the dusty windows of the aging facades you can not see that here, in the middle of Berlin's Lichtenberg district, a new kind of model for agriculture is being tested on 3,000 square meters. The principle is easily explained: 16,000 farmed fish in eight pools produce excretions, which are converted by bacteria into nutrients and are then used for vegetable cultivation.

The plants absorb the nutrients, the water flows back purified to the fish. Aquaponics is the name given to the cycle that is also used in other major German cities such as Hamburg, Nuremberg and Dortmund. 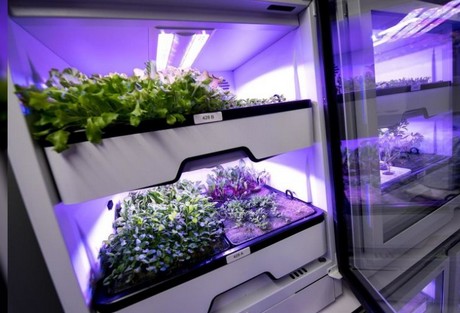 Potatoes, cucumbers and other crops cost valuable resources in cultivation and transport and generate pollutants. In 2017 alone, 70 percent of global water consumption and 30 percent of global greenhouse gas emissions were accounted for by agriculture, says the Fraunhofer Institute for Industrial Engineering. At the same time, agriculture feeds 26 million German people a day in 2016, according to the Federal Statistical Office. The consequence of this is clear to the founders of the Stadtfarm: Agriculture has to move from the countryside to the city.

Located in the middle of a Berlin landscaped park, the Stadtfarm shows what that looks like. According to the company, the farm, which was set up in 2017, produces 50 tons of African catfish and around 30 tons of vegetables every year for the population of Berlin. The goal is to be resource-saving and to be close to the consumer, says project manager Anne Vollborn.

Tomatoes, cucumbers and herbs are not the only products. Bananas, Ceylon spinach or passion fruit are also grown on the urban farm. Customers use the order form to order their own boxes of salads, fish products and vegetables, which are delivered by employees to their doorstep.

For the Department of Agriculture, urban agriculture is a supplement but not a substitute for rural food production. "The areas required for agricultural production are still much scarcer and more expensive in conurbations than in rural areas," says a spokesperson for the ministry.

The share of agricultural land in the total area of ​​land in Germany was around 51 percent in 2017, as data from the Stastista Federal Office show. That's more than 182,000 square kilometers. Only about 0.15 percent of the area used was one of the three city states of Berlin, Hamburg and Bremen, with a combined population of around 6.1 million.

This is not surprising in view of the dense development with residential buildings. The 52 farms that existed in the city's 3.7 million inhabitants in 2017 had a combined total of 435 cattle, 44 pigs and 540 sheep.

Another form of urban agriculture has been taking place in selected German supermarkets and restaurants for some years. The Berlin Infarm company supplies these with LED illuminated incubators for plants. The idea behind it was that basil, mint and rocket could grow without transport routes in the supermarket. Weather independent, energy efficient and space-saving. The production method known as vertical agriculture is considered as a possible model for the city of the future. The Munich start-up Agrilution produces such mini-greenhouses also for the private household.

"We use 95 percent less water and at the same time we reduce the transport routes by 99 percent through the cultivation in the city center," says a brochure from the company Infarm. According to this, up to 7500 plants a year could be produced in a two-square-meter incubator. Some 148 supermarkets and restaurants throughout Germany are using these futuristic incubators, according to Infarm.

On the other hand, the German Farmers' Association is reluctant to talk about vertical agriculture. "Apart from a few start-ups with high-priced niche products in the fruit and vegetables sector, Vertical farming has so far had little significance overall," says Deputy Secretary-General Udo Hemmerling. The association adds, however, that the economics of vertical agriculture may increase in the future due to advances in digitization.