"we want to grow to a 19 hectare facility"

Another expansion for Finland's biggest grower

Another expansion for Finnish grower Sven Sigg AB. The company, already Finland's largest tomato producer, is expanding with another 3.1 hectares in Närpes. The greenhouse itself will be 2.5 hectares, the rest of the space is used for additional storage facilities and parking space. Grower Patrik Sigg reveals the strategy of the company: “We have a twelve-year plan to follow, in which we expand as much as possible.”

Finland's largest producer
Sven Sigg AB is Finland’s largest tomato producer. It was founded in 1997 and run by brothers Tommy and Patrik since 2015, who were already growing tomatoes for ten years by then. The assortment of Sven Sigg includes Encore, Foundation, and Clodano tomatoes and has been expanded in the last couple of years to grow peppers as well. All products being grown are destined for the Finnish market and are sold via a grower cooperative.

The current expansion is realised turn-key by Gakon. The Dutch supplier has been building for the company for many years already and takes care of the greenhouse, heating, screening installation, gutters and concrete work.

Planting is scheduled for November when another member of the Sigg family will supply the young plants: Sigg Plants, the biggest propagators of Northern Europe, is run by a cousin of Patrik and Tommy. Not all Finnish growers are related to each other, Patrik laughs. "But I believe maybe half of them are part of the Sigg family."

19 hectare facility
The twelve-year expansion plan that Patrik refers to, includes the goal to grow to a 19-hectare facility. The Finnish market currently depends on imports, and not many growers have the capability and knowledge to grow here, since the availability of light during winter and also spring isn't just low, it actually is non-existent. Imagine growing with only two hours of daylight!

In order to do so, Finnish growers highly depend on artificial lighting. Sven Sigg AB also chose a serious installation to grow their produce during the dark months: a 450 mmol/m².s HPS 1000W grow light installation by Hortilux Schréder is to be installed by Ecomont Oy.

The choice for HPS is an easy one, as the radiant heat from the grow lights can also be used very well in Finnish winter. In order to keep climate under optimum control, a screening system using a Ridder screen is installed as well.

Electricity, heat, water and snow
There are more circumstances in Finland that require special attention. Adjusted to these circumstances, Gakon has designed a 6 meter high greenhouse, the roofing system of which is equipped with rubber. In the facade of the building, sandwich panels and isolation glass is being used.

Then there's the possibility of snow - quite a regular occurrence in Finnish winters. The greenhouse is prepared for it, as the construction can bear up to 40 kg snow per square meter. "It happens, but actually snow isn't such a big problem", Patrik reveals. "It is good that the greenhouse can carry the amount of course - but we see that snow falling on the glasshouse will melt right away."

Also electricity and water aren't the big challenges in Finnish horticulture. "Of course it is to get everything in place, but once everything is installed we're ready to go", Patrik says - something that Gakon is currently doing by expanding the current boiler room and installing the new heating system. The facility is equipped completely to use as little of the resources as possible to grow the highest quality produce.

Labour on the other hand is more difficult. "Traditional workers are easy to find, but the working leaders are less available here." They train many people themselves in order to keep the quality of the labour on the wanted level. 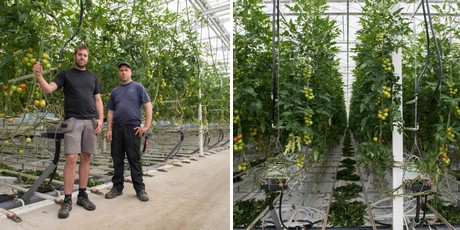 Local produce
Including the current expansion, Sven Sigg AB is halfway toward the total 19-hectare goal that they hope to reach within the next decade. "Growing here is hard, especially in the dark winter months. But when we succeed, then it's very good. There are a few growers here, but not many. When it comes to the prices, in the beginning, it will be a challenge - but there is a demand for more locally grown produce", Patrik says.  "We want to expand to fulfill this demand."