France: "Proud of our products without any residue"

It has been two years now that the Paysans de Rougeline developed production without any chemical residue through the Nouveaux Champs Collective. A collective which brings together more than 44 companies in France today, intended for a promising future. “One of the main concerns currently expressed by the French consumer is the problem of the phytosanitary treatments in the fruit and vegetable sector. Therefore, the creation of a line of products with zero chemical crop protection residue meets the expectations of the consumers, who worry about possible traces of treatments in the fruits and vegetables,” explains Bruno Vila, president of Paysans de Rougeline.

Besides answering to this concern, Bruno indicates that this alternative is all the more interesting that it is only 20 to 40% more expensive that the standard product, while organic products usually cost 2 to 3 times more on the market. “A third way based on agroecology which meets halfway between sustainable agriculture and organic farming. Today, our method has produced a whole range of fruits and vegetables which will fill the shelves of our consumers throughout 2019.”

According to Bruno, the zero chemical crop protection residue production currently represents 15 to 20% of the Rougeline volumes, a percentage that the producers are determined to increase in the coming years. 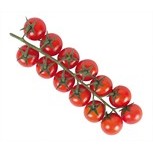 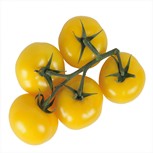 The French cluster tomato stands out from imported products with its quality
“The situation since early/mid-December is quite good for the cluster tomato with prices around 2 to 2.80 euros/kg [1.05 to 1.50 USD/lb]. From a commercial point of view, the period went well. However, volumes are rather small, around 150 to 200 tons per week. Overall, we do not occupy an important place on the market in this winter season. There is still competition with the Spanish products, but only indirectly, as the imported merchandise does not necessarily match the quality our products have to offer.” A qualitative difference which, according to Bruno, can be explained by the fact that Rougeline, unlike Spain or Morocco, works with heated greenhouses allowing for the production of homogeneous clusters.

As for the round tomato type of products, the competition is much more fierce given the significantly lower import prices and their much less costs.”

Towards a gradual saturation of the market?
“We are just coming out of a complicated season with some moments from mid-July to the end of August when prices dropped really low. We have also been quite affected by the weather, with an insufficient yield in early May and the heat wave of August. Regarding prices and yield, we experienced a decline in 2018, which means that for basic products like the cluster and round tomatoes, 2018 was a particularly bad year.

The situation was better for segmentation products, including small fruits and old varieties, which are quite representative for Rougeline. We cannot predict how a season will turn out. It depends among other things on the weather conditions but also on the situation in Russia and Great-Britain. Besides, northern countries like Belgium and the Netherlands are investing more and more in lighting, which allows them to continue to produce through the winter, at the same time as Spain or Morocco. As a consequence, we see an increase in early volumes, which means that the importation periods are starting to overlap more and more. The market can therefore be more congested at times. This worries us because all these developments lead to a further saturation of the market, year after year,” concludes Bruno Vila.