An indoor ag year of investments and innovation

2018 is almost over. That means it's time for relaxation, exchanging gifts, and eating way too much (and not just veggies). It's also a time to reflect on the past year, and to look forward to what's on the horizon. That's exactly what we'll do now. Joining us at the holiday table to discuss the state of the indoor agriculture industry are Glenn Behrman, Founder & President of GreenTech Agro and CEA Advisors, Robert Colangelo, Founding Farmer/CEO of Green Sense Farms, and Erik Runkle, professor in the Department of Horticulture at Michigan State University. 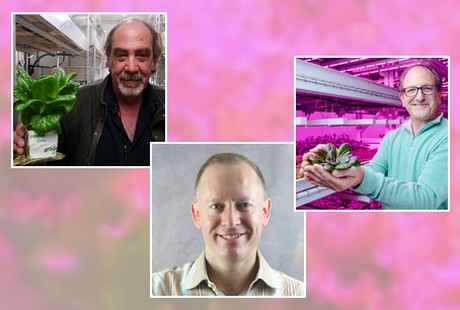 To kick things off, we ask our guests how they would describe indoor agriculture's 2018 in five words or less.

For Glenn, 2018 was a good year, with the successful pilot and subsequent expansion of the Store Grown program with their major US grocery retail partner, Central Market. "Hyper-local produce grown behind the actual supermarket in Growtainers and available for sale in the Produce sections, sometimes only minutes after harvest."

Robert sees the increased amount of capital going into the agtech market as a sign the controlled environment agriculture sector is being taken seriously. Erik, meanwhile, points to an increase in knowledge, having learned more about how green light influences leaf expansion and increases growth of lettuce. Yet much more research is needed in 2019 and beyond, he says.

Hyping, pricing, and working together
The biggest challenge for the industry in 2019, according to Glenn, is that there are "too many newcomers entering the industry that have been lured by 'likes', 'followers', hype, VC money and the promise of unrealistic returns. We need more people that truly understand what indoor ag is and what it isn’t and are not afraid to take chances and think outside the box. Those that understand that the technology available today is only a tool to produce more outputs with less inputs."

Robert says the biggest challenge for the coming year will be increasing the unit price of produce. "In part it can be done through branding, marketing and educating the consumer on the nutritional value of locally grown produce."

Those challenges are of course best tackled through cooperation within the industry, which itself could be seen as a bit of a challenge. According to Erik, developing a unified indoor farming industry association will be another challenge in the year ahead. At the individual firm level though, he thinks profitability will continue to be the greatest challenge.

Disruption, automation, innovation
Looking forward, Robert is particularly excited about new advancements in indoor growing technology. At the moment, at Green Sense Farms they are working on conveyance automation systems to optimize production and a robotic ventilation system to minimize micro climates.

Erik is focused on continued sole-source lighting research in combination with other environmental factors to increase yield and quality attributes of leafy greens. "I have several projects in mind, but the scale and scope will depend on the funding we can obtain to support the research."

After 45+ years in global horticulture, including the past 10 years laser focused on indoor ag and technology-based production, Glenn sees a future that capitalizes on the highest and best use of the available resources.

He sees 2019 as the year that he'll be able to "blend all the experience, wisdom and instinct that I possess and perfect a game changing strategy that totally disrupts the fresh produce supply chain. I’m 68, I've been doing this since I’m 21. It’s time for me to concentrate on the legacy I wish to leave behind."