CAN (ON): Improvement in prairie drought in December, though drought pockets remain

Drought improved in portions of the western Prairie in December, but small areas of severe and extreme drought stubbornly held on in pockets of southern Ontario.

Drought conditions generally improved in most regions of the country in December, with above-normal precipitation fueling the improvements in the western Prairie, according to the latest monthly update of the Canadian drought monitor on Wednesday. On the other hand, below-normal precipitation in parts of western Alberta, southern Manitoba, and southern Ontario resulted in those areas seeing slightly worsening drought conditions. 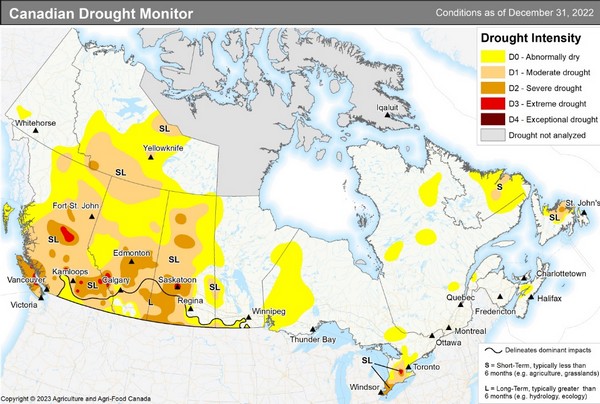 Changes in December for the Prairies included the removal of extreme drought across Alberta and southern Saskatchewan, as well as a reduction to portions of severe drought. However, northern areas of the Prairies continued to see below-normal precipitation in December. The deficits have continued to grow over the last six months, the monitor said, roughly equating to 50 to 75% below-normal precipitation since July. As such, two pockets of severe drought developed in northern Saskatchewan.

As 2022 ended, many areas across the Prairie Region reported a fairly dry year. La Ronge, Saskatoon, and Red Deer all reported in their top 10 driest years, while Key Lake, SK, and Banff, AB, both reported their driest years on record. In contrast, Winnipeg received 150% of its normal annual amount, making it the wettest year on record.