“Over the past 4-5 years, Thrips parvispinus outbreaks have become more frequent in ornamental crops in the Netherlands,” he says. “They have generally been found in tropical foliage plants, hiding in new, rolled-up leaves - making them difficult to target with sprays. 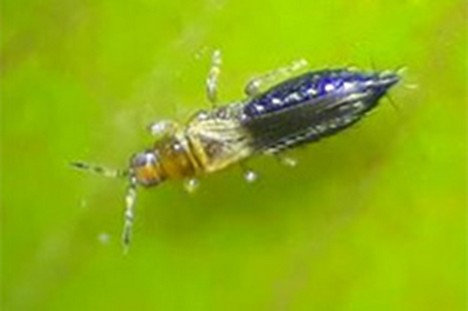 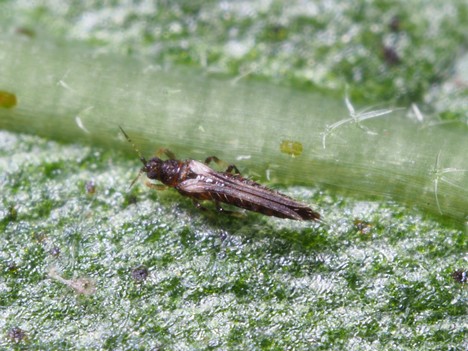 “The predatory mites, which form the backbone of effective WFT control strategies, appear to behave differently; they predate less on parvispinus and are so less effective,” he says. “To compensate, Dutch ornamental growers are employing higher rates of Amblyseius-System (Amblyseius (Neoseiulus) cucumeris) - to slow down pest development.

“Generalist predators - such as Orius-System, Macrolophus-System, and Chrysopa-System - perform well on pollen-producing plants, such as peppers, and can feed on parvispinus. However, on pollen-less ornamental crops, they do not establish as well. It will be more challenging to develop effective control strategies for ornamentals,” he warns. 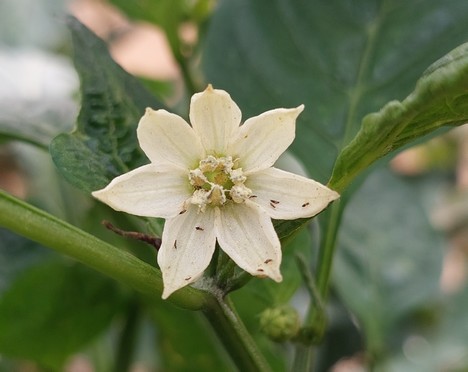 Trips on a flower

“Echinothrips is dark colored with a reddish, dark brown neck,” explains Koen. “Parvispinus is subtly different – while also having a black abdomen, its rear and middle thorax segments are yellowish brown while the front segment and head are brown.

Wageningen University and Research Greenhouse Horticulture has compiled a helpful downloadable thrips identification poster*. If in doubt, growers should collect a sample of the pest and consult their Biobest advisor for help with identification.”

Preventative approach
With no silver bullet to control this pest to minimize damage, Koen recommends a preventative, rather than curative, approach.

“As things stand, we urge pepper growers in Northern Europe to remain highly vigilant and introduce higher rates of predatory mites and Orius-System as soon as the pest is confirmed,” he says. “Meanwhile, the Biobest team is working on developing targeted strategies for different regions.”