The Netherlands reports a slightly higher agricultural income in 2022

In 2022, the Dutch agricultural sector generated 1.9 percent more income than in 2021. At the same time, animal output dropped slightly (-0.7 percent) while crop output fell relatively sharply by -3.4 percent. Agricultural output prices increased on average, but so did production costs. This is evident from an initial estimate of agricultural income conducted by Statistics Netherlands (CBS) and Wageningen Economic Research. 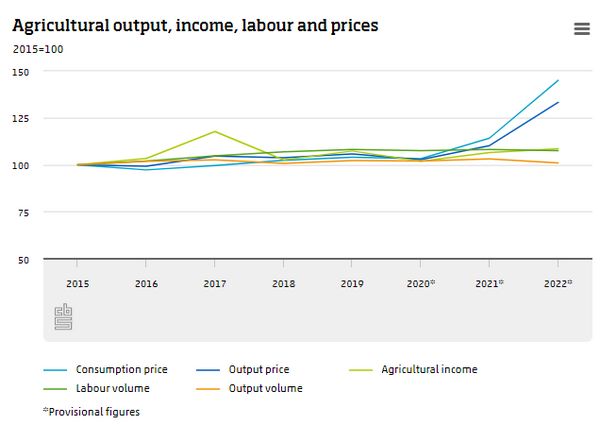 The value of the goods and services required for agricultural production, also known as intermediate consumption, rose by 24.2 percent year on year. The amount of COVID-19 support in the form of subsidies and compensation decreased by 31.3 percent. Despite increased production, agricultural income rose only to a limited extent: by 1.9 percent, due to both higher costs and the phasing out of financial compensations by the government.

Adjusting the income development for inflation (+4.6 percent in 2022) and taking into account the decline in labor volume (-0.9 percent), in 2022 (real), annual agricultural income per labor year decreased by 1.7 percent.

Higher costs of fertilizers, compound feed, and energy in 2022
Especially the costs of mineral fertilizers, energy, and compound feed were substantially higher in 2022 than in the previous year. Prices of gas and electricity even rose by more than 200 percent. The surge in energy prices was caused by the war in Ukraine and the ban on Russian gas imports. This mainly affected horticulture under glass.

Milk prices rose substantially
In 2022, animal output (volume) decreased by 0.7 percent year on year; the average output price rose by 37.6 percent. The value of animal output rose by 36.7 percent as a result.

This year, the price of milk is 47.5 percent higher than in the previous year. Milk production rose by 1 percent, with most of the increase occurring in the second half of the year. At that time, European dairy prices were rising sharply, and the rise in raw milk prices outweighed the increased costs of compound feed, for example.

Livestock exports are down, except pig exports
This year, livestock farmers supplied almost as many animals to the slaughterhouses as last year. Exports declined at the same time. The output of almost all livestock declined in volume, but the output volume of pigs increased. Similar to 2021, Germany could not export livestock to China due to the outbreak of African swine fever in eastern Germany. Tightness in the market did result in more pig exports from the Netherlands and higher market prices (+22.8 percent).

The steep increase in prices and output of cereal
In 2022, the output (volume) of the crop sector in the Netherlands declined year on year by 3.4 percent. The average output prices of crop products increased by 8.5 percent. This drove up the gross output value to 16.4 billion euros.

In arable farming, output rose by 6.1 percent this year. Due to the war in Ukraine and Russia's blockade of grain exports, grain producers in the Netherlands greatly increased their acreage and production (+34.2 percent). The scarcity also drove up grain prices by 28.2 percent. Potato yields rose to well above the five-year annual average despite the drought. The drought did reduce the occurrence of potato disease and more irrigation. Potato prices rose steeply as well.

Horticulture recorded a 5.5 percent lower output. Vegetable farmers saw their output decline by 5.4 percent. This decline was offset by higher output prices for fresh vegetables (+16.5 percent). The output value of fresh vegetables rose by 10.2 percent. Vegetable growers could largely pass on the sharp rise in energy prices in their output prices.

Lower output in ornamental horticulture
Ornamental plant production, which accounts for almost half of the crop sector's gross output value, declined in 2022. The output value of ornamental flowers and plants was 500 million euros less than the previous year. Output fell by 6.7 percent because greenhouse flower producers temporarily halted production in response to soaring natural gas prices.

Prices of ornamental horticulture products remained more or less unchanged due to stagnant demand for flowers. Due to increased inflation, consumers bought fewer flowers, which had a dampening effect on prices.