Wageningen, December 2022 - Saia Agrobotics, developer of robotics for food production in greenhouse horticulture, has completed a new financing round led by Navus Ventures and in collaboration with Oost NL.

Worldwide, the demand for healthy, fresh, and sustainably produced food will increase by between 30 and 50 percent in the coming decades, according to recent research. Dutch greenhouse horticulture technology is the market forerunner in the optimal production of, for example, tomatoes, cucumbers, and peppers. Although the demand for Dutch greenhouses of about 5000 hectares per year keeps on growing, according to Rabobank, the prime bottleneck is the availability of labor and knowledge to keep these greenhouses operational. 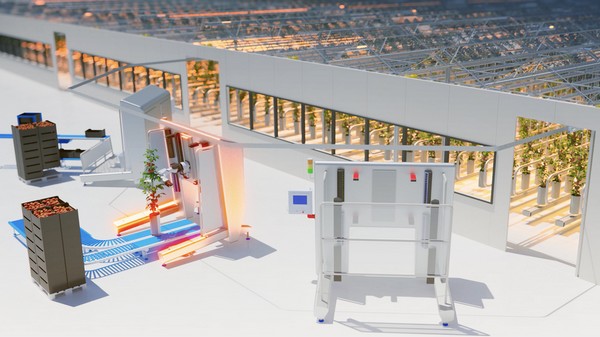 Automation as a solution has so far lagged far behind compared to other sectors. Saia Agrobotics advocates a systemic change; unique to her technology is that the robot does not enter the greenhouse, but the plant comes to the robot instead. This way, the robot has full visibility and access around the plant to enable fast harvests and plant maintenance. This paradigm creates a highly automated 'Food Factory of the Future' in which a data-driven autonomous greenhouse with the help of artificial intelligence is getting closer to realization.

"After a 20-year trajectory of developing mobile harvesting robots at Wageningen University & Research, it was time to enter the market with a spin-off," says Dr. Ruud Barth, co-founder, and CEO of Saia. "However, we quickly concluded that things have to radically change to make a significant impact. We need to move out of the jungle in the greenhouse towards single, easily accessible plants in a central processing hall. Only then can you automate the greenhouse reliably, quickly, and therefore economically."

Saia's successful financing round follows a period of technological development, which has led to several patents. After an initial seed investment by impact and deep tech investors SHIFT Invest, Innovation Industries, and Oost NL (from ION+), the new financing round allows Saia to continue preparing the new revolution in greenhouse horticulture and food production for the market.

Eduard Meijer, director at Navus Ventures, says, "Saia Agrobotics has developed innovative concepts and technology in the field of plants, automation, and logistics, creating a new approach to greenhouse growing, with the potential to take a major step in efficient and sustainable food production. This investment, therefore, fits perfectly with Navus' strategy, and we look forward to helping the team further on its way with our background, experience, and network."

Arnaud Zwaal, investment manager at Oost NL, also states: "Saia is a good example of a startup that has developed from Wageningen University & Research and has an innovative solution for a major social challenge. Digitization and robotization are needed to produce sufficient healthy and sustainable food now and in the future. Saia has developed strongly over the past two years and is ready for the further commercialization of their product, which is why we, as Oost NL, are investing again in the company."