Energy sales don't compensate for everyone

The company revenue for an average horticulturist is estimated at €175k or 2022. This means a decrease of €10k compared to 2021.

The range around the average revenue is larger this year than in other years. For example, 20% of companies are estimated to have a revenue per unpaid awu of less than €2k. For an equally large group, a revenue of over €155k is estimated per unpaid awu. 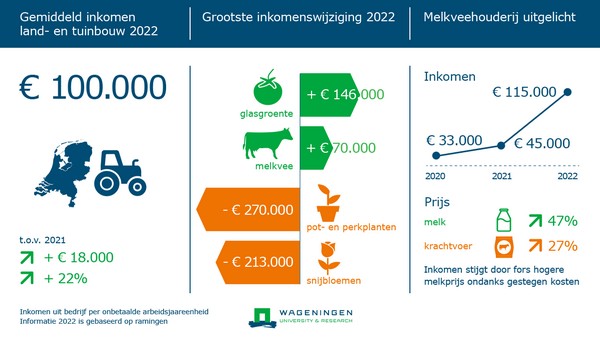 Decrease average company revenue for greenhouse growers
Company revenue in 2022 for the average greenhouse grower is estimated at around €175k per unpaid awu. This is approximately €100k lower than in 2021 and €35k beneath the average revenue over 2017-2021. This year, the revenues of greenhouse growers are under pressure from increased costs, weak consumer confidence, high inflation, and varying yields. With a relatively hot year during sunny circumstances and big changes in corporate strategy, an even stronger decrease in revenue could be prevented.

Dutch greenhouse growers have been confronted in 2022 with, among others, much higher purchase prices of natural gas and electricity. Where possible, growers invested in energy-saving measures, optimized their energy management, or saved and/or extensified. Sometimes at the expense of product quality. Despite these measures, besides a big change in the normal cultivation plan, the cost still rose considerably.

Because of a good ratio between the price of purchased gas and the sales price of electricity, there has also been a substantial increase in revenue from electricity sales for companies with combined heat and power (CHP). A part of the businesses without CHP or other sources of sustainable energy supply were less able to react flexibly to the rising costs and encountered losses. With this year's volatile energy market, a prediction of corporate strategy and corresponding operating results remains very difficult, partly thanks to the company-specific choices of entrepreneurs. Both within and between the three distinguishable subtypes (see below), a large range can be seen in revenue development.

Greenhouse vegetable grower sees revenue rise
Average company revenue per unpaid awu of greenhouse vegetable businesses in 2022 is estimated at around €415k, around €150k higher than in 2021, because revenues increased more sharply than the costs. The height of income is strongly dependent on the flexibility of the company and its equipment, the product type, how sales are organized within the company, and the company's energy positions.

Some businesses with a CHP decided to heat their greenhouses less and light their cultivations less as well, resulting in lower physical production. The option of energy sales against higher prices compensated for the rise in heating costs since the electricity sales prices increased more sharply than the purchase prices of natural gas.

Good cucumber year, tomato slightly less
Regarding crops: tomato cultivation (the most important crop in Dutch acreage) enjoyed a less favorable year. Average prices are estimated to be higher than last year, but the supplied volumes were lower. A large part of the growers had shut down assimilation lighting completely. Cucumber growers, however, enjoyed a very favorable year with extremely good prices. The pleasant summer weather has stimulated sales. Growers of sweet peppers see their results improve as well, especially because of higher revenues from energy sales.

Revenue cut flower growers decreases
Average company revenue per unpaid awu of cut flower businesses decreases compared to 2021 from around €300k to around €85k. It's a steep decline after an exceptionally good past year. The estimated revenue hasn't been this low since 2013. The lower revenue from flower sales because of lower prices and volumes was yet, compensated with an increase in revenue from energy sales. Because of this, total revenue increased by 2%. However, this was insufficient to fully compensate for the increased costs (+23%) of mainly energy. 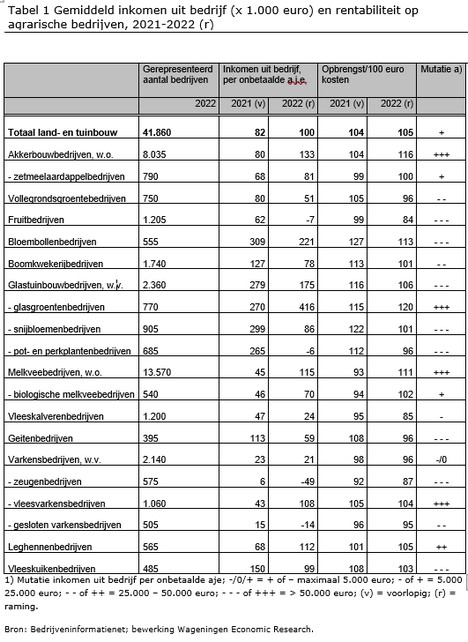 Large differences
Between and also within the discussed business types in agriculture and horticulture, the differences in revenue are large. This is shown in the yearly revenue estimation of Wageningen Economic Research, led by corporate agricultural economist Harold van der Meulen: "In 2022, we see in all agricultural and horticultural sectors strong cost increases for energy, cattle feed, and artificial fertilizer. In a few sectors, these cost increases are amply compensated with higher sales prices for supplied products like in the dairy sector, arable farming, and greenhouse horticulture. There are agricultural sectors as well, such as pig farming, where sales prices of pigs are insufficiently increased to compensate for the increase in costs. Besides, in other horticultural sectors, the sales prices of flowers, plants, and fruit even dropped by such a degree that it resulted in a substantial decrease in revenue."

Unpaid annual work unit
Wageningen Economic Research calculates the agricultural revenue per unpaid annual work unit (awu). Agricultural entrepreneurs and their families in most sectors take care of the majority of work themselves but often don't receive a salary. An employee that works 2,000 or more hours in a year is perceived as a single awu. Who works fewer counts for less than one awu. Wageningen Economic Research divides the company revenue in this situation by the number of unpaid awu. This way, revenues from different business types can be compared better.

Simultaneously with the revenue estimation of Wageningen Economic Research, the CBS (Statistics Netherlands) presents the macro economical figures of agriculture and horticulture of The Netherlands. The income concept in the agricultural accounts of the CBS differs slightly from the concept in the agricultural sector estimations from the publication of Wageningen Economic Research. The agricultural accounts of the CBS, for example, show results based on the calendar year, while the sector estimation uses the harvest year as a baseline.