In October, German fresh fruit and vegetable imports declined significantly again. Those were 18% lower than in October 2021, and in the first ten months of 2022, 11% lower. Total German fresh fruits and vegetable imports should reach 8.3 million tons in 2022, more than ten percent down from 2021. Imports were much lower in 2022 compared to previous years too. However, at €13.5 billion, the value of last year's imports equals those in 2020 and 2021.

Germany imported 15% fewer Dutch products from the Netherlands in 2022 than in 2021. If you include re-exports, the decline is slightly smaller because re-exports of products like bananas, grapes, avocados, and blueberries had increased.

Less from Spain and other large suppliers too
In 2022, Germany's imports from the other major European supplier, Spain, lagged tremendously too. According to the German Stastistisches Bundesambt, at 2.6 million tons, Germany will import more than ten percent fewer Spanish products in 2022 than 2021's 2.9 million tons. In 2019 and 2020, that was around 3 million tons. At 930,000 tons, imports from Italy in 2022 will be eight percent down from the 1.01 million tons in 2021. 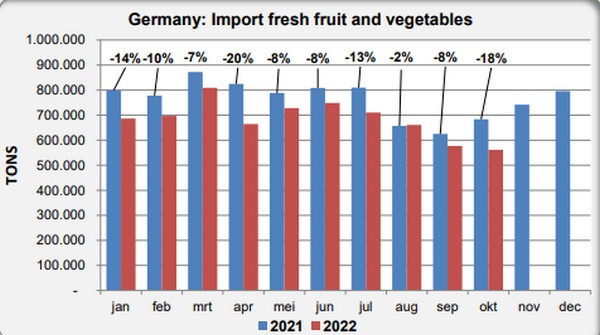 Less of all major products
Regarding fruit and vegetables, bananas are, by far, Germany's top import product. After increasing to 1.42 million in the previous year, German banana imports stayed at 1.31 million tons in 2022. The country got fewer bananas from Ecuador, Columbia, and Costa Rica. But more from the Dominican Republic, Guatemala, and Panama. At least 500,000 tons of these fruits arrive in Germany via the Netherlands, and from Belgium, at least 250,000 tons.

Generally, far fewer tomatoes imported, yet more from Morocco
Tomatoes are the second top German import product. In 2022, the imports of 642,000 tons were as much as 15% behind 2021's 756,000 tons. In all the previous years, well over 700,000 tons were always imported. Imports were especially down from the Netherlands - 295,000 tons compared to 387,000 tons in 2021. in 2022, Germany imported five percent fewer Spanish tomatoes than the year before. That was offset by a third more tomatoes being imported from Morocco.

However, the 72,000 tons of Moroccan product is far less than those from the Netherlands and Spain. Germany imported fewer of the two other major greenhouse products, cucumbers, and bell peppers, in 2022, too; for cucumbers, 13% less, while bell pepper imports were eight percent lower. For Dutch products, those quantities were minus 12 and seven percent, respectively. Imports of these products from Spain also showed a considerable decline. 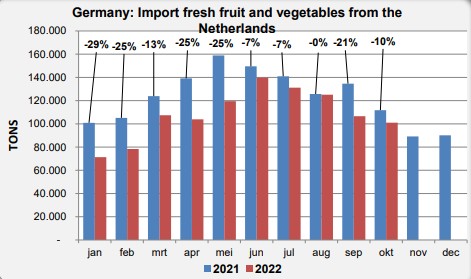 More apples and pears from Belgium and the Netherlands
In 2022, Germany imported fewer (almost ten percent) apples too, especially from the two largest supplier countries, Italy and Poland. However, considerably more apples were imported from the Netherlands and Belgium. Germany also imported more pears from those two countries in 2022 than in 2021 and the previous years. German orange imports lagged significantly (-10%) in 2022 too.

Yet, German imports of other products did increase melons (+20%), avocados (+2%), and cauliflower/broccoli (+14%). After continued growth, blueberry imports remained stable in 2022, while raspberry imports, too, declined.